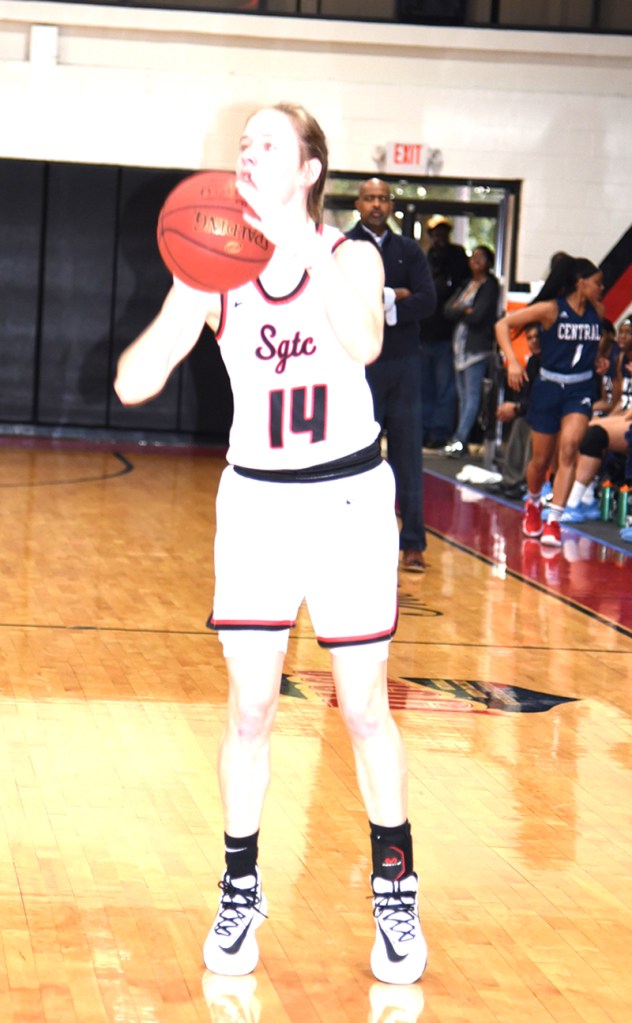 The 16th ranked Lady Jets improve to 17-2 overall and 7-0 in the Georgia Collegiate Athletic Association (GCAA), while the Jets fall to 8-8 on the season and are 1-1 in the GCAA.

While he was happy with his team’s win, SGTC women’s head coach James Frey knows that his club needs to have a strong performance for an entire game and not just in spurts. “We played a good fourth quarter, but we can’t play in spurts and continue to win,” Frey said. “We have got to get to the point where we don’t turn it off and on. We need to play hard for the entire 40 minutes.”

The Lady Jets led at halftime 38-32, but took control in the second half to win by 17 points. SGTC didn’t start the game against the Lady Titans as well as they finished it. The Lady Jets were up 14-13 at the end of the first quarter after falling behind 6-0. In the first half, there were nine different lead changes and six ties before SGTC finally went into halftime leading 32-28. The two teams continued to battle in the third quarter and the Lady Titans outscored the Lady Jets 19-18 to close the gap to 50-46 by the start of the fourth quarter.

However, the Lady Jets turned it up a notch in the final 10 minutes to come away with the 17-point GCAA conference win over the Lady Titans. Sophomore Anna McKendree came off the bench to have her best game of the season with 25 points. McKendree hit five of 11 shots from the three-point line and scored 16 of her 25 points in the second half to help lead the team to the victory. 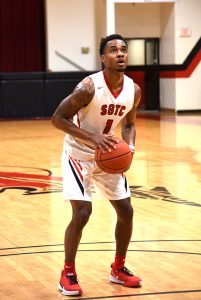 Freshman Hope Butera came off the bench to score nine points and Flore Ngasamputu had six points. Moe Shida added four points and both Niya Gudelock and Oumy Gueye had three points each. Both Amara Edeh and Sarah Lwambo scored two points each to round out the Lady Jets’ scoring. Gueye was the only Lady Jet in double-digit rebounding with 10 rebounds.

The Lady Jets are still in first place in the GCAA and are the only unbeaten women’s team in conference play.

As for the Jets, they came up short against CGTC by the score of 51-48, though they put forth a good effort in the second half. The Jets trailed 32-28 at the half, but allowed the Titans to stretch the lead to 12 points at 44-32 early in the second half. SGTC rallied and took their first lead of the night at 46-45 with 2:49 remaining in the game, but were not able to close the deal.

“I was very proud of the way we came back at the end and made Central Georgia Tech work for the win. The team could have given up when we were down by 12, but they didn’t. They fought back and we were in the game up until the final buzzer,” SGTC men’s head coach Travis Garrett said. “We had several chances to tie the game or pull ahead in the last minute, but the ball just didn’t fall.”

The Jets dropped from a three-way tie for first place in the GCAA standings into fifth place behind South Georgia, Albany Tech, Georgia Highlands, and Central Georgia Tech.

SGTC was led in scoring by Lamont Sanders, who was the only Jet in double figures with 15 points. Sanders sank seven of eight free throws to help the Jets in their come-from behind attempt. Merdy Bata and Brice Paster both had eight points and Denari Garrett scored five. Toriano Lewis scored three points, while Justin Johnson and Tabais Long each scored two. Austin Hadden closed out the scoring with one point.

Both SGTC teams have two tough conference games this week as they travel to Cuthbert, GA on Wednesday, January 8, to take on Andrew College. The Lady Jets open at 5:30 and the Jets follow at 7:30 p.m. The two teams will then travel to Rome, GA on Saturday, January 11, to take on Georgia Highlands at 1 p.m. and 3 p.m.