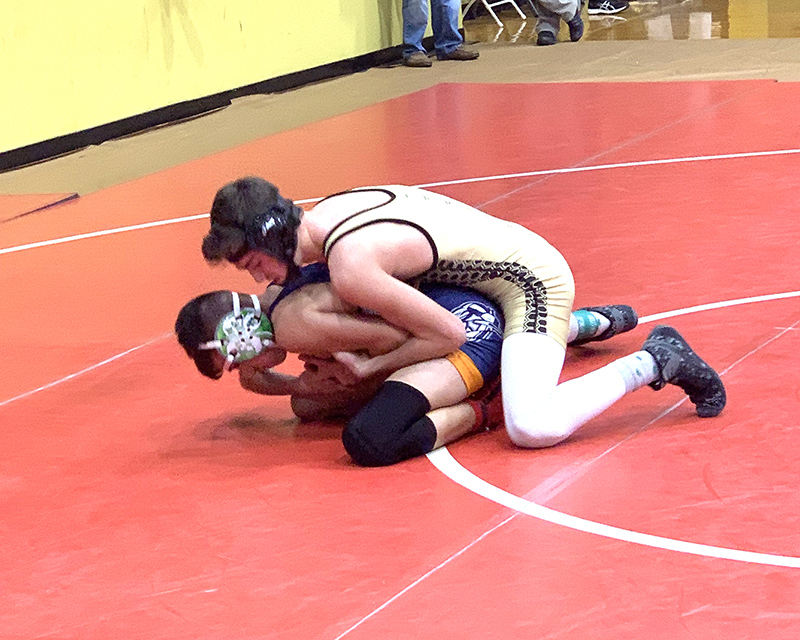 “It was a good two-day tournament. Each one of my wrestlers ended up getting at least seven matches so it’s getting us prepared for state for a two-day tournament,” SA head coach Mike Smith said. “Overall, we wrestled well and we’ve got a little time to get better.”

There were a total of 13 schools, including SA. Competing in this tournament and wrestlers competed in 14 weight classes ranging from 106 lbs. to 284 lbs. 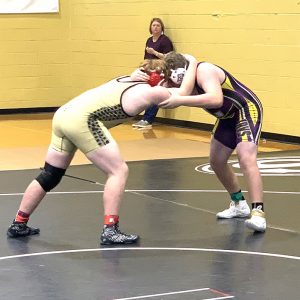 Southland Academy’s John Saye (yellow) ended up finishing in third place in the 220 lb. weight class at the Glory Days Tournament at Southland Academy this past weekend.
Photo by Ken Gustafson

Tanner Humphrey was the only Raider to take home a first-place finish. The defending state champion finished in the winner’s circle in the 120 lb. weight class. Antonio Del Vecchio of Valwood came in second place and Spencer Sharp of Bulloch Academy came in third in the 120 lb. weight class. Humphrey was able to beat Del Vecchio in an extremely hard-fought match. “He’s a great wrestler Del Vecchio,” Humphrey said. “Just working smarter, not harder…try to conserve energy and get points and try to not give up any points.” 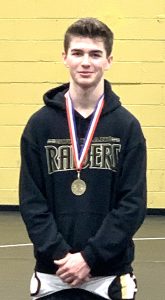 Tanner Humphrey with his first-place medal after winning the championship of the 120 lb. weight class at the second annual Glory Days wrestling tournament held at Southland Academy.
Photo by Ken Gustafson

Beau Mitchell of George Walton finished as the champion in the 132 lb. weight class, followed by Adam Massey of Bulloch Academy and Jordan Cadiere of Gatewood.

Will Rhodes was another Raider who turned in a strong showing in the tournament. Rhodes finished as the runner up in the 145 lb. weight class behind champion Harrison Wren of Bulloch Academy. There was a tie for third place in that weight class between Agnus Bateman of George Walton and Levi Collins of Gatewood. 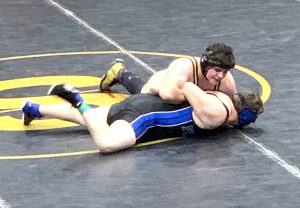 The final Raider to finish as a runner up was Tyler Joyner. Joyner finished in second place in the 182 lb. weight class behind Jake Wasdin of Bulloch Academy, who finished as the champion. Brock Heath of Pinewood Christian finished in third place.

In the 195 lb. weight class, Stratford Academy’s Kieran MacKinnon finished as the champion and Jayson Wright of John Milledge was the runner up. Charles Dodds of Bulloch Academy finished in third place.

Up next for the Raider wrestlers is a trip down US Highway 19 to Leesburg, GA on Tuesday, January 28, for a non-conference meet at Lee County High School. The meet will get underway at 5 p.m.