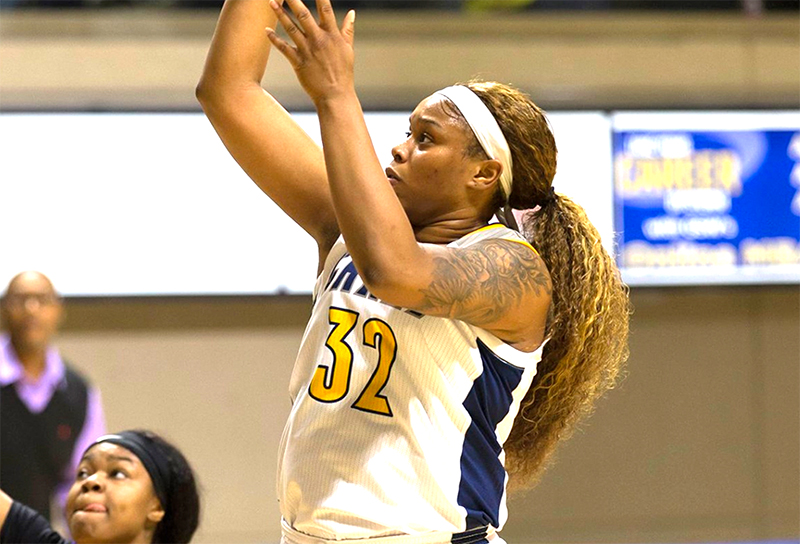 YOUNG HARRIS, GA – The Georgia Southwestern State University women’s basketball team (GSW) opened up the fourth quarter against Young Harris College (YHC) with a five-point lead, but the Lady Mountain Lions quickly retook the lead and dominated the entire fourth quarter on their way to defeating GSW 60-50 in a Peach Belt Conference (PBC) matchup on Wednesday, January 22, at the YHC gymnasium.

The game had seven total lead changes and five ties as GSW was inching to get back into the win column. Both teams amounted to 13 second-quarter points, but nine missed free throws by the Lady Hurricanes proved to be costly.

Neither team could get much going offensively in the second quarter. After two minutes of missed shots, YHC was able to land one in the rim, but GSW guard Lex Chatman responded with a three-pointer to cut YHC’s lead to one at 22-21. During the final four minutes of the first half, both teams scored twice, but the Lady Mountain Lions still led 26-25 at halftime.

YHC opened the third quarter with a deep three-pointer and went on a 7-2 to take a six-point lead. After a deep three-pointer by Kya Cochran, Madison Johnson scored six straight points to put the Lady Hurricanes up 36-35. This was part of an 11-0 run by GSW before YHC was able to get on the board with a pair of free throws. Layups by Cochran and Jeffery closed the third as the Lady Hurricanes took a 42-37 lead going into the fourth quarter.

In the fourth quarter, it was all YHC as they outscored the Lady Hurricanes 23-8. The YHC defense held the Lady Hurricanes to just eight points for the entire quarter. YHC (11-6, 5-4 PBC) opened up the final quarter with back-to-back three-pointers, which led to a 17-1 run. AS a result, the Lady Mountain Lions took a 16-point lead. It was a deficit from which the Lady Hurricanes could not fully overcome.

One thing in this game that proved costly for the Lady Hurricanes was poor free-throw shooting. GSW made only 7 of 16 free throws (43.8 percent) while YHC was 11 of 14 (78.6 percent). Being that the Lady Hurricanes lost by 10 points, the woes at the foul line were a key factor in their undoing.

The Lady Hurricanes forced 20 turnovers in this game, but YHC outrebounded GSW 47-37.

Jeffery led the Lady Hurricanes in scoring with 14 points and Johnson poured in eight points, along with one steal. Kayla Smith led GSW in rebounds with a total of eight.

YHC was led in scoring by Bria Clemmons with 17 points. Niaya White ended with a double-double, getting 11 points while grabbing 10 boards for the Lady Mountain Lions.

The Lady Hurricanes will try to stop their current losing streak when they invite the Lady Braves of UNC Pembroke to town for a Saturday game on Jan. 25 at 1:30 p.m.