THOMASVILLE, GA – After their decisive 48-24 victory over Crisp Academy (CA) on Friday, January 24 in Cordele, the Southland Academy Lady Raider Basketball Team (SA) embarked on a two-hour trip down to Thomasville on Saturday hoping to extend their two-game winning streak to three against Brookwood in an important GISA Region 3-AAA contest. Unfortunately, SA lost to the Lady Warriors 44-42 in a hard-fought battle.

With the loss, the Lady Raiders fall to 14-4 overall and are now 3-2 in the Region 3-AAA standings.

SA had three players score in double figures. Maddie Crisp led the Lady Raiders with 17 points and Holly McCain poured in 10. Riley Mitchell scored seven points, Jadie Burrell chipped in four and both Morgan Weaver and Katie Rogers each scored two points in the losing cause. 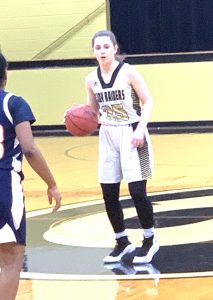 In their game against CA the day before, the Lady Raiders had a much better outcome. They jumped out to an early lead and went on to defeat the Lady Panthers 48-24. Weaver led SA with 12 points in this game and Mitchell almost cracked the double-figure scoring column by pouring in nine points. Maddie Crisp scored seven and Haleigh Warren had six points in the winning cause.

The Lady Raiders have three more regular-season games before the Region 3-AAA Tournament. They will host Tiftarea Academy on Tuesday, January 28, at 6:30 p.m. They will then travel to Albany to take on Deerfield-Windsor on Friday, January 31, at 6:30 p.m. and will finish the regular season by hosting Brookwood on Tuesday, February 4. Tip off for that game is scheduled for 6:15 p.m.