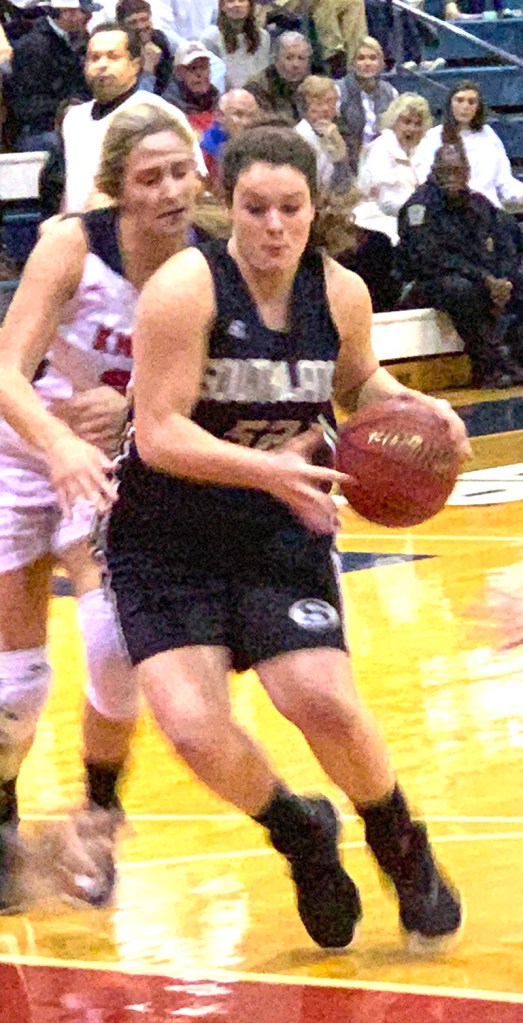 Southland Academy junior forward Holly McCain led the Lady Raiders in scoring with 13 points in the loss at Deerfield-Windsor. Photo by Ken Gustafson

ALBANY – With two region games against Deerfield-Windsor (DWS) and Brookwood (TBS) remaining in the regular season, the Southland Lady Raider Basketball Team (SA) wanted to finish the regular season with two victories so that they would have strong momentum going into the upcoming Region 3-AAA Tournament. Having lost to DWS 45-30 in Americus in the first meeting, SA wanted to topple the Lady Knights on their home floor. Unfortunately for SA, that did not happen. In the second half, DWS went on a 13-2 run and to take control of the game and defeated the Lady Raiders 53-35 on Friday, January 31, at the W.T. Henry Gymnasium on the DWS campus.

With the loss, the Lady Raiders fall to 15-5 overall and drop to 4-3 in the Region 3-AAA standings. Being that TBS defeated Valwood 61-21 on Friday, the Lady Warriors have moved ahead of SA in the region standings at 5-2. However, the Lady Raiders have already clinched a berth in the GISA Class AAA State Playoffs.

DWS (20-3, 8-0) has already clinched the regular-season championship and will be the #1 seed in the upcoming Region 3-AAA Tournament at Georgia Southwestern State University. Depending on the outcome between SA and TBS on Tuesday evening, February 4, the Lady Raiders will be either the #2 or #3 seed in the region tournament.

“You’ve got to play 32 minutes of good basketball against them (DWS). We had a couple of lapses and it got away from us,” SA Head Coach Ty Kinslow said. “They’ve got eight seniors on the team. They’ve got a really good team, but we keep working hard to get a little better. We put a little scare into them (DWS). We keep getting better. We’ve got a lot of young girls that are getting better each game. Hopefully, we’ll get to see them again, but we’ll have to go through a good Brookwood team.” 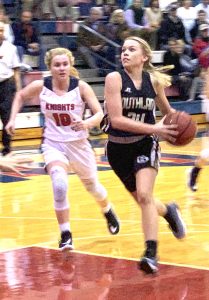 Being that SA and TBS will either finish second or third in the Region 3-AAA standings, the Lady Raiders are slated to play the Lady Warriors in the first round of the region tournament no matter the outcome of SA’s regular-season finale against TBS on Tuesday night at Southland Academy.

DWS was led in scoring by Lila Lanier with 22 points and Emilee Foy scored 14 in the winning cause. 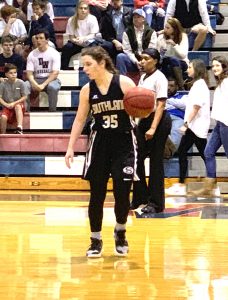 The Lady Raiders jumped out to a 7-3 lead early in the game, but the Lady Knights showed why they are 20-3 on the season. They outscored SA 9-4 during the remainder of the first quarter to take a 12-11 lead by the quarter’s end.

It was a back-and-forth affair between both teams during the first two minutes of the second quarter. Both teams aggressively pushed the ball up the court and attacked the basket on offense, but midway through the quarter, the Lady Knights went on a 6-0 run, which was capped off with a basket by Lanier. This prompted Kinslow to call a timeout to get his team to regroup. At this point, SA trailed 20-13.

Out of the timeout, Reese Roland knocked down a jumper to cut the deficit to five. Over the remaining minute of the first half, the Lady Raiders scored four straight points to cut the DWS lead to 21-19, but DWS would fire the last salvo of the half. Jamia Lofton’s three-pointer off the glass at the buzzer gave the Lady Knights a 24-19 lead at halftime.

The Lady Raiders responded quickly to start the second half, as Crisp nailed a three-pointer. This was followed up with a basket by McCain to tie the score at 24-24. 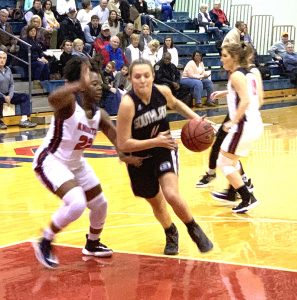 However, the Lady Knights responded with a 6-1 run, which was capped off a transition basket by Foy. Then with a little over two minutes to go in the third, Caroline Speir knocked down a three-pointer to give DWS a 33-27 lead. Just before the quarter’s end, Speir struck again with another three-pointer and the Lady Raiders found themselves trailing 39-29 to start the fourth quarter.

The Lady Knights stepped up their defensive pressure in the early stages of the fourth quarter. They forced SA into committing turnovers and scored seven unanswered points to take a 46-29 lead before Kinslow called a timeout with 5:08 to play. Unfortunately for the Lady Raiders, they fell behind by as much as 18 points in the fourth quarter and were unable to recover.