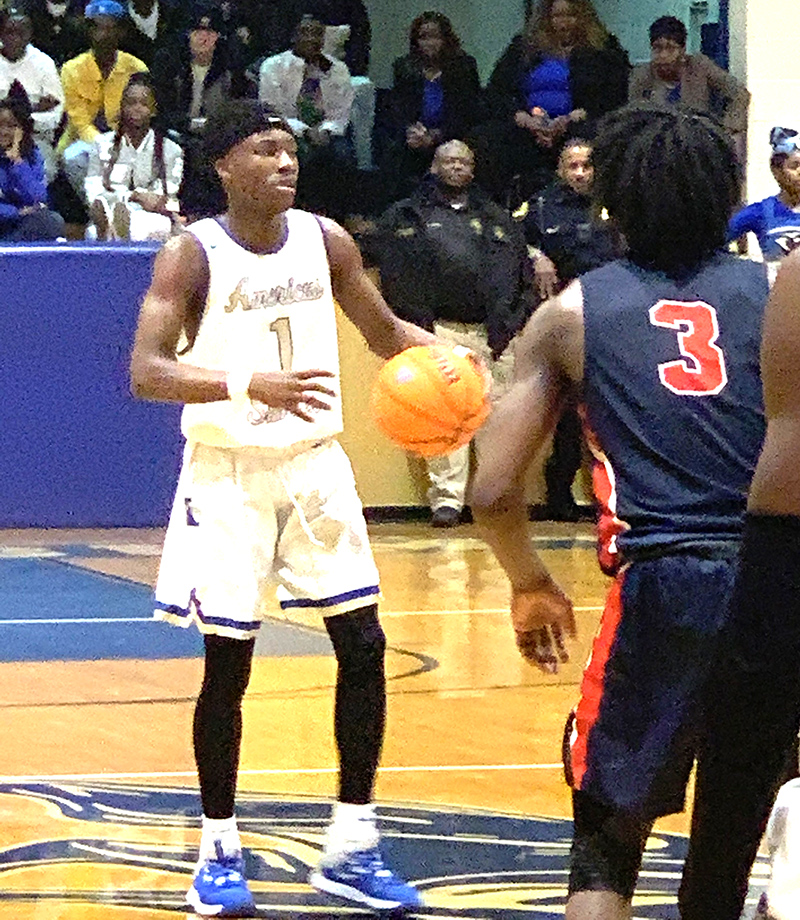 Americus-Sumter senior point guard Wallace Bradley (1) scored 13 points to lead the 25-0 Panthers to a 59-54 victory over Westover in the regular-season finale on Senior Night at Americus-Sumter High School. Photo by Ken Gustafson

AMERICUS – The dictionary definition for the word “resilient” describes someone who is “able to withstand or recover quickly from difficult conditions.” If resilient could describe a group of people, such as a sports team, it would describe the 2019-2020 Americus-Sumter boys’ varsity basketball team (ASHS). The Panthers, now undefeated at 25-0, showed their resiliency on Saturday evening, February 1.

Down by as much as 14 points in the first half and seemingly unable to hit any kind of shot, ASHS regained its footing in the second half. The Panthers went on a crucial 6-2 run to tie the game in the fourth quarter, knocked down several clutch foul shots and made plays on defense to come away with a 59-54 win over Westover (WHS) on Senior Night at Americus-Sumter High School.

With the win, the Panthers completed a perfect overall regular season at 25-0 and finished 16-0 in Region 1-AAAA play. The Panthers may be the only high school basketball team in Sumter County history to go undefeated during the regular season.

“We got off to a slow start, but I knew our guys were going to pick it up,” ASHS Head Coach Johnny Genwright said. “They battled back and they kept fighting and fighting.”

Four Panther seniors finished in double figures, making it a memorable Senior Night for them. Point guard Wallace Bradley led the Panthers in scoring with 13 points. However, Bradley’s five made free throws in the fourth quarter proved to be the major difference in the outcome. Senior shooting guard Le’Shanna Ross was also in double figures with 12 points and senior guard Quevoluia Willoughby also scored 12. Senior shooting guard Trae Brown was also in double figures with 11 points. Nine of Brown’s points came on three-three-pointers. 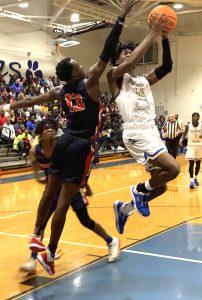 Americus-Sumter senior small forward Kanova Willoughby goes up to score against Westover. Willoughby scored two points in the win over the Patriots.

The Patriots (13-10, 11-5) were led in scoring by Isaac Abbide with 19 points and Shamir Wingfield scored 13. The Patriots finished third in the Region 1-AAAA Standings behind Carver (16-8, 13-3), who finished as the regular-season runners-up.

The Panthers got off to a rough start in the first quarter. The shots that had fallen in previous games weren’t falling at all for ASHS. They struggled to make shots from the outside and struggled to penetrate the Patriots’ two-three zone defense.

In previous games throughout the season, the Panthers made shots early and that gave them a chance to use their full-court press to generate turnovers and turn them into points, which they did often. However, in this second meeting with the Patriots, those shots weren’t falling in the early part of the game and the Panthers weren’t able to employ that full-court press. 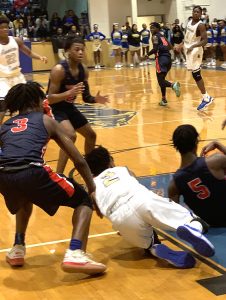 Americus-Sumter senior guard Melton McCoy dives on the floor and fights for the ball against Westover.
Photo by Ken Gustafson

In the first meeting between these two teams in Albany on Saturday, January 11, the game went down to the wire as well, with ASHS coming out on top 45-39.

As for the Patriots, they were able to take advantage of the situation by jumping out to a 16-2 lead. Keshay Walton and Ezekiel Prince combined to score 12 points for WHS in the first quarter to help lead the Patriots on this run. By the end of the quarter, the Panthers found themselves trailing 20-7.

Early in the second quarter, ASHS started to come alive. They scored four unanswered points, including an alley-oop dunk by Quevoluia Willoughby. Brown followed that up with a three-pointer and that got the ASHS crowd into the game. However, the Patriots maintained their poise. Wingfield knocked down two three-pointers in the second quarter and Abbide scored five second-quarter points. 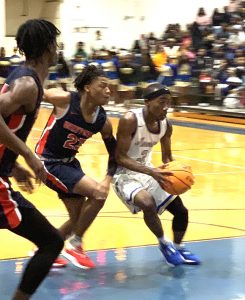 Fortunately for the Panthers, Ross knocked down two three-pointers and Brown knocked down another one to help keep ASHS within striking distance. By halftime, the Patriots led 34-24, but the Patriots had awoken a “sleeping giant.”

Over the first four minutes of the third quarter, there wasn’t much scoring, as both teams were struggling offensively. However, with 4:08 to go in the third, Brown struck again with another three-pointer to bring ASHS to within nine a 37-29.

From there, the Panthers began to draw closer, as senior shooting guard JaKontist Gordon scored off an assist by Brown. Gordon would later nail a three-pointer to bring ASHS to within one at 38-37. The Panthers were once down by 14 points and now they were within two points of taking the lead. 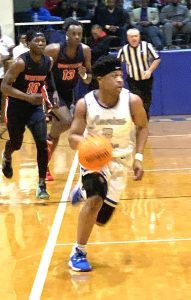 With about a minute to play in the third quarter, the Panthers decided to run the clock down to try for a last shot. They weren’t able to score on that possession, but they were able to get a steal and a basket by senior point guard Melton McCoy to end the quarter trailing 40-39.

Just seconds into the final quarter, the Panthers took their first lead of the game when Bradley knocked down a three-pointer. However, the Patriots fought back by scoring six straight points to take a 46-42 lead. But as they have done all season long, the Panthers fought back again by going on a 6-2 run to tie the game at 48-48. That 6-2 run by ASHS proved to very crucial in the outcome of this game.