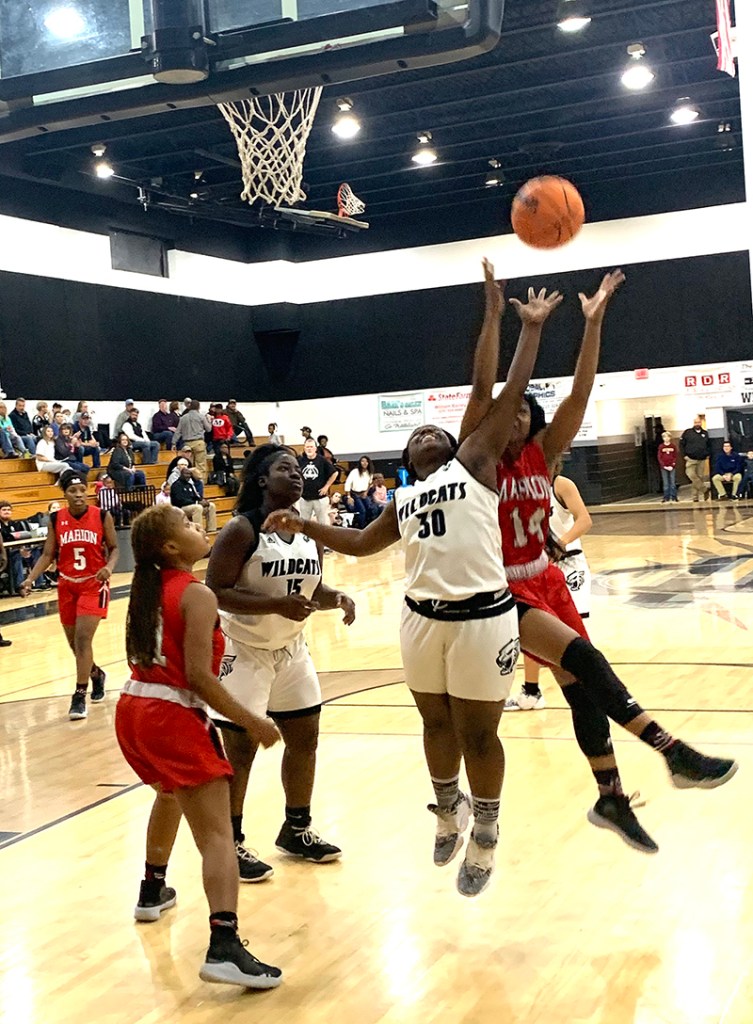 Schley County for ward Amiyah Walker (30) goes up for a rebound against Marion County. Walker led the Lady Wildcats in scoring with 10 points. Photo by Ken Gustafson

As a team, the Lady Wildcats made only seven of 23 free-throw attempts during the game.

Amiyah Walker led SCHS with 10 points and both Niyah Kelley and Berkley Goodin each scored nine. Sarah Barnhill chipped in seven points in the losing cause.

The Lady Eagles (12-9, 7-7) were led in scoring by Diamond Franklin with 28 points and Jamesha Williams scored 16. Taylor Green was also in double figures with 10 points.

MC jumped out to a 13-3 lead in the first quarter before Walker knocked down two free throws to end the Lady Wildcats’ scoring drought. Walker scored again off a pass from Kelley to cut MC’s lead to six. However, the Lady Wildcats continued to struggle in the first half with turnovers and scoring the basketball. In spite of those struggles, SCHS was still in the game, as they trailed 18-9 with 6:12 to play in the half. 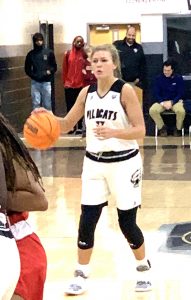 However, midway through the second quarter, SCHS went into another scoring drought until Darden Campbell nailed a three-pointer to cut their deficit to 21-12. Campbell followed that up with another basket and was fouled on the play. She made the free throw to cut MC’s lead down to 21-15. However, the Lady Eagles went on an 8-1 run to close out the first half and led 29-16 at halftime.

The defensive pressure from the quicker MC team continued to cause the Lady Wildcats problems in the third quarter. As a result, the Lady Eagles were able to jump out to a 38-18 lead, which was capped off by a steal and layup from Franklin.

During the waning minutes of the third quarter, MC continued to put pressure on the Lady Wildcats’ offense and scored some transition baskets. Though they did get some steals and fast-break baskets in the closing seconds of the quarter, the Lady Wildcats still trailed 48-30.

Though the Lady Wildcats tried to get back in the game, they were unable to do so in the fourth quarter. Franklin scored another transition basket and Williams nailed a three-pointer to put the Lady Eagles up 54-32 with a little over six minutes remaining. From that point on, the Lady Eagles continued to dominate their way to a 63-44 victory.

Up next for SCHS is the first round of the Region 4-A Tournament to be held on Monday, February 3, at SCHS. The Lady Wildcats will try to rebound from their setback against MC when they take on Hawkinsville at 4 p.m. Should they win that game, they will take on the winner of the game between Crawford County and Taylor County on Tuesday, February 4, at SCHS.