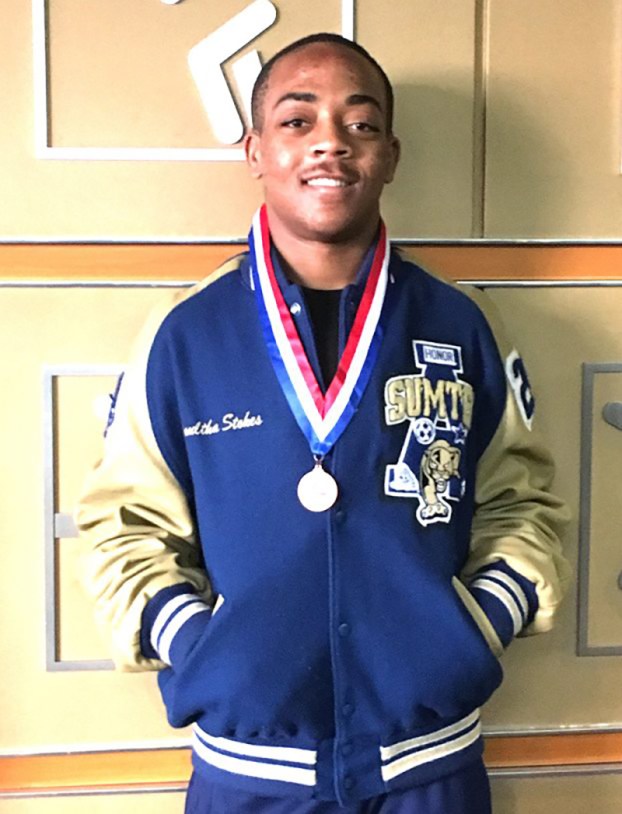 Americus-Sumter wrestler A.J. Stokes is seen here with his medal that he won in a previous meet. Stokes won the individual championship in the 182-lb. weight class at the Region 1-AAAA Tournament. ATR Archive

A.J. Stokes, who is undefeated on the season at 19-0, defeated Wesley Morgan of Northside (Columbus) by fall. Stokes then reached the championship match against Kenorrie Brown of Dougherty and defeated him by fall to take the 182-lb weight class title. In the process, Stokes scored 24 points for the Panthers.

Calvin Wright III finished in third place in the 170-lb. weight class. In the quarterfinal round, Wright one by fall over Collin Bryant of Hardaway.

Wright lost to Marquis Sanabria of Shaw in the semifinals, but defeated Jimmy Jiminez of Cairo by fall in the consolation semifinals. Wright currently has a record of 15-7.

This put Wright in a rematch with Bryant in the third-place match and Wright defeated Bryant again to take third place in the 170-lb. weight class.

This put Walker in the third-place match. Walker went on to defeat Micah Johnson of Columbus by fall to take third place in the 220-lb. weight class.

In the 285-lb. weight class, Kason Hodges has a strong showing at the region tournament with a fourth-place finish. Hodges began the tournament by losing to Mykel Williams of Hardaway in the quarterfinals. However, he bounced back by defeating Jakobi Carter of Carver (Columbus) by fall. He then went on to beat Keshawn Hearn of Shaw before losing to Williams again in the third-place match.

Last but not least, Ja’rod Lewis finished in fifth place in the 132-lb. weight class.

Lewis lost to Brian Moore of Columbus in his first and then fell to Jarrod Osei of Westover. However, he bounced back by defeating Aaron Lewark of Northside (Columbus) to take fifth place.

Lady Wildcats bounce back with win over Hawkinsville in region tournament

ELLAVILLE – After having a difficult outing in their season finale against Marion County in which they lost by the... read more