Lady Wildcats bounce back with win over Hawkinsville in region tournament 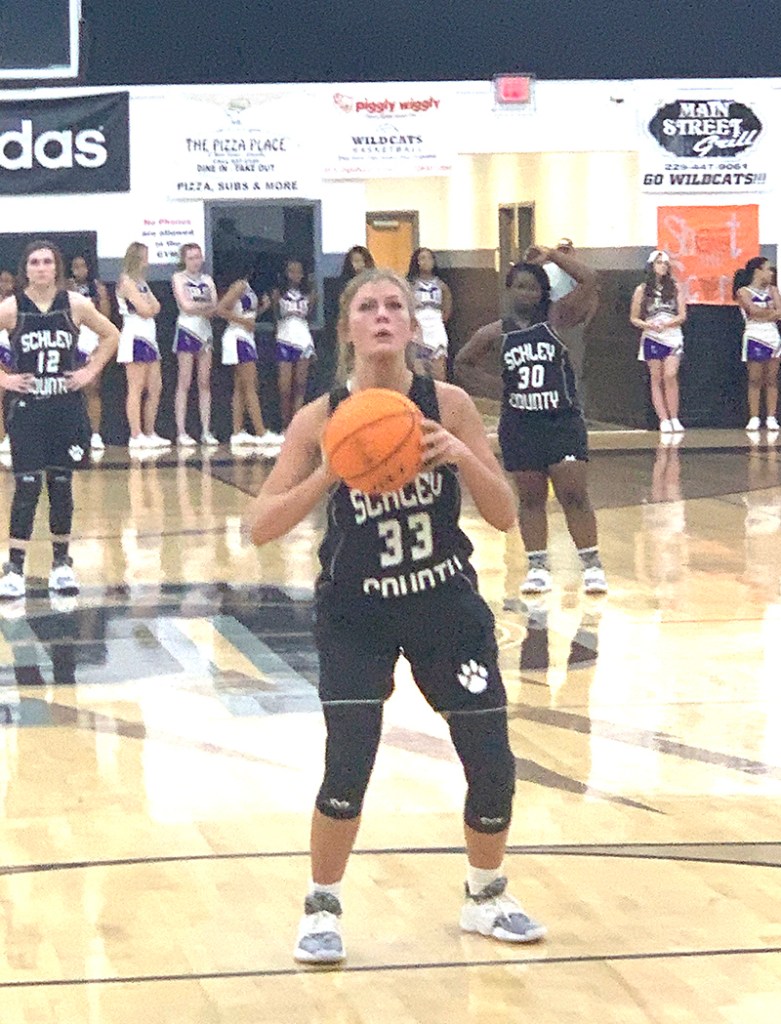 Schley County’s Darden Campbell makes two important foul shots to help lead the Lady Wildcats to a 32-26 victory over Hawkinsville in the first round of the Region 4-A Tournament. Photo by Ken Gustafson

ELLAVILLE – After having a difficult outing in their season finale against Marion County in which they lost by the score of 63-46, the Schley County Lady Wildcats (SCHS) rebounded by scoring a 32-26 win over the Lady Red Devils of Hawkinsville (HHS) in the first round of the Region 4-A Tournament on Monday, February 3, at Schley County High School.

It was a defensive struggle between both teams, but the Lady Wildcats, though they struggled offensively, were able t make enough defensive plays to pull out the victory.

“We did well. We really played good defense,” SCHS head coach Cliff Royal said. “We didn’t make a lot of shots. We’re not a really strong offensive team, but we played hard defensively. My girls fight hard and we fight to the end. That team (HHS) is very well coached. We made some big shots at the right time of the game and got lucky.”

Amiyah Walker led the Lady Wildcats in scoring with 12 points and Berkley Goodin poured in 11. Niyah Kelley scored three points and both Patience Solomon and Sarah Barnhill each scored two points in the winning cause.

The second half between both teams was evenly played as well, but the Lady Wildcats were able to make more plays. Late in the game, SCHS had a 29-26 lead and the ball. Darden Campbell was fouled while shooting and made both foul shots to extend the lead to five. HHS was not able to respond at the other end, as their shot wouldn’t fall. Goodin got the rebound, was fouled and made one of two foul shots to seal the win for the Lady Wildcats.

With the win, SCHS continues their season one more day and improves their overall record to 9-11. They will play Taylor County (TC) on Tuesday, February 4. TC defeated Crawford County in their first-round opener in the tournament.