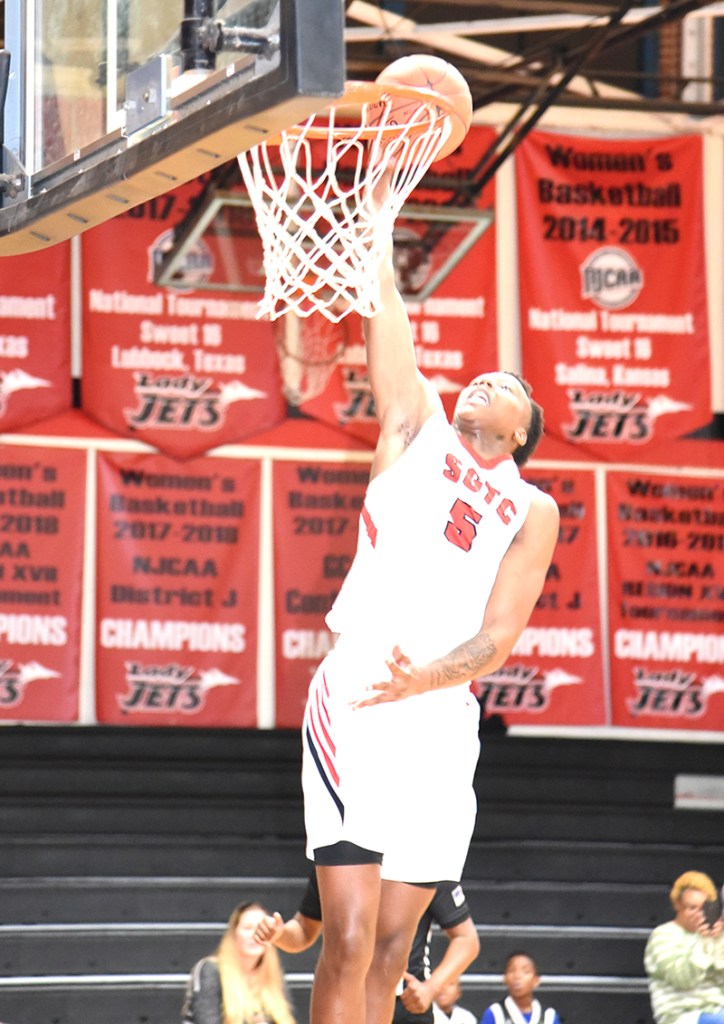 AMERICUS – It was Super Saturday at South Georgia Technical College (SGTC) when the Jets and the Lady Jets earned impressive Georgia Collegiate Athletic Association (GCAA) victories over the East Georgia State College Bobcats and Lady Bobcats on Saturday, February 1, at the Hangar on the SGTC campus.

Following the Lady Jets’ victory, the Jets stepped onto the court and secured an 84 -58 victory over the EGSC Bobcats, making it a complete sweep. The Jets are now 3 – 6 in the GCAA and 10-13 overall. EGSC falls to 1-8 in the GCAA and 4-14 on the season.

All five of the SGTC Lady Jet starters scored in double-figures against EGSC and freshman center Femme Sikuzani had a double-double night with 10 points and 12 rebounds. Sikuzani also had two blocked shots, an assist and a steal.

SGTC sophomore guard Anna McKendree was the other starter to have double-figures for the Lady Jets against EGSC. McKendree scored 12 points, grabbed five rebounds, dished out three assists and tallied four steals in the contest.

Hope Butera chipped in six points for the Lady Jets and both Amara Edeh and Veronica Charles each scored four points in the winning cause. Moe Shida added three points and Flore Ngasamputu tossed in two points to round out the Lady Jets’ scoring.

Freshman Denari Garrett accounted for six points and Jalen Reynolds had five points and 10 rebounds off the bench. Brice Paster and Jairus Carroll each tossed in four points, while Jaylan McKinney, Lamont Sanders, and Jonathan Kanyanga closed out the scoring with two points each.

The Jets and Lady Jets will both travel to Macon to face Central Georgia Technical College (CGT) in conference match-ups on Wednesday, February 5, at 5:30 and 7:30 p.m. The CGT men are ranked second in the GCAA with a 7-1 record, while the Jets are seeded seventh. The CGT women are in third place behind the Lady Jets and Georgia Highlands College. Their record is 8-6 in the conference.

ASHS Girls’ Track and Field Team gets off to…