AMERICUS – On Wednesday morning, February 5, Southland Academy running back Clay Owens made his decision as to where he will continue his education and play college football. Owens signed his National Letter of Intent to play at Charleston Southern University (CSU), an NCAA Division 1-AA school in Charleston, SC.

Owens had a fantastic career for the Raiders. During his senior year, he broke school records for most yards rushing in a career (5,035), most touchdowns in a career (68) and most yards in total offense (6,121). In 2019, Owens was able to help lead the Raiders to a 7-5 overall record and a berth in the second round of the Georgia Independent School Association (GISA) Class AAA State Playoffs.

Owens caught the interests of several colleges. In addition to being sought after by CSU, Owens caught the attention of schools such as Valdosta State, North Greenville University and Kennesaw State University just to name a few. However, when he went to visit CSU, he was won over.

“It felt like home. The coaching staff was really nice. I met a lot of the players that are going to go there next year,” Owens said. “They all seem like the same people d own here. I like my friends down here and they seem like my friends up there.” 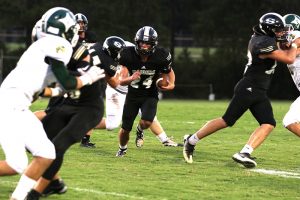 During his senior year (2019), Southland Academy running back Clay Owens (24) broke school records for Most All-Purpose Yards in a Career (6,121), Most Touchdowns in a Career (68) and Most Yards Rushing in a Career (5,035).
ATR Archive

As far as academics are concerned, Owens plans to major in business and would either like to go into the insurance business or go into coaching after he graduates from CSU. As far as football is concerned, Owens said that the CSU coaches plan to use him as a running back and a slot back and that he plans to just work hard.

Before he actually put pen to paper and signed his National Letter of Intent to play for the Buccaneers, Owens thanked his family and friends for being behind his back and supporting him for the last four years. “It means a lot,” Owens said.

SA head coach Rod Murray stated that Owens has brought a lot of energy to the Southland Football Program. “He’s just so much fun to coach. He’s really grown as a player, understanding his responsibilities when he doesn’t have the football,” Murray said. “He’s just a joy to coach, along with all our kids here. I’m blessed to be where I am and we’re so thankful to have these guys and players like Clay to play here at Southland Academy.”

The Buccaneers will kick off the 2020 season when they host North Greenville University on Saturday, September 5. On Saturday, November 14, CSU will play its next to last game of the regular season at Mercer University in Macon.