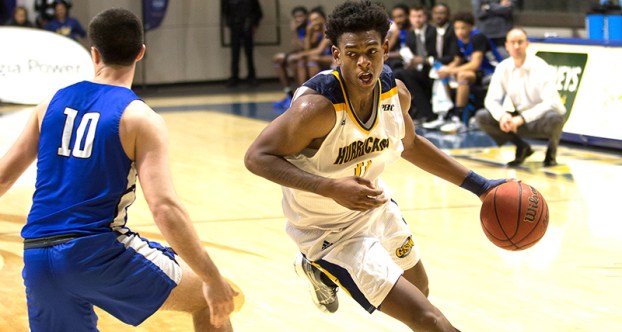 GSW sophomore forward Jamari Dean scored 27 points on nine of 15 shooting to lead the Hurricanes in scoring in their 90-77 loss at North Georgia. Photo by Chris Lind

Depleted Hurricanes run out of gas at North Georgia

DAHLONEGA, GA – With only seven players available, Georgia Southwestern State University men’s basketball head coach Aaron Coombs had to rely on his starting five to cover 193 of the 200 minutes on the floor Wednesday night, February 5, in the Convocation Center against the University of North Georgia. GSW was within four points of the Nighthawks with 3:11 to play, but ran out of gas down the stretch to suffer a 90-77 loss in the Peach Belt Conference (PBC) matchup.

GSW held the lead for 13.5 percent of the game, with the largest margin coming at 18-13 with 13:35 remaining in the first half. GSW guard Soloman Thomas knocked down a three-pointer with 10:11 to go in the first half to give the Hurricanes a 28-26 lead. However, it would be their final lead of the night. The Nighthawks answered with a 15-4 run over the ensuing 6:46 and eventually took a 43-36 advantage into halftime.

GSW forward Jamari Dean accounted for seven points over a 12-4 run by the Hurricanes in the second half, which pulled GSW to within three points at 78-75 with 4:06 remaining. However, GSW missed on five attempts from beyond the arc down the stretch and that allowed UNG to pull away for the win.

Dean matched his career high of 27 points to lead the Hurricanes and connected on nine of 15 from the floor and 8 of 11 from the free throw line. Dean also added a game-high eight rebounds and three steals. Kahlon Whitley made six of 9 shots, including both attempts from beyond the arc, en route to a 16-point output. Thomas added 15 points and Jalen Cameron chipped in 10 with six assists.

K.J. Jenkins came off the bench to score 19 points to lead the Nighthawks. Jenkins drained five of six shots from long range. Ephraim Tshimanga scored 14 points and dished out seven assists for UNG.

Up next for the Hurricanes is an extremely tough home contest against one of the top teams in the PBC: the Pacers of the University of South Carolina Aiken (14-9, 10-3 PBC). The game will take place on Saturday, February 8, at 3:30 p.m.

AMERICUS – For three Americus-Sumter student-athletes, their dreams of competing at the college level officially came true on the morning... read more