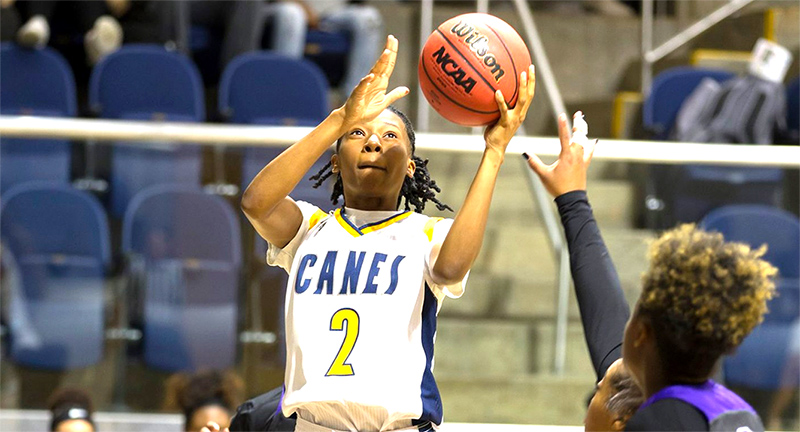 DAHLONEGA, GA – The Georgia Southwestern State University women’s basketball team (GSW) traveled up to Dahlonega, GA with the hopes of pulling off an upset against the No. 17-ranked team in the country: the Lady Nighthawks of the University of North Georgia (UNG). Unfortunately for the Lady Hurricanes, it wasn’t to be as UNG defeated GSW 74-56 in front of a rowdy UNG crowd and pep band at the UNG Convocation Center Wednesday night, February 5.

In just her fifth start of the season, GSW sophomore guard Jamesha Samuel posted her second 20-point plus scoring game with 21 points and finished four of nine from behind the arc.

GSW senior point guard Tamecia Blue made back-to-back layups within the first two minutes of the opening quarter, but shortly thereafter, the Lady Nighthawks showed who they were by knocking down back-to-back three-pointers.

Samuel quickly answered with a three-pointer of her own to hush the crowd, but UNG’s Kara Groover responded back with another three-pointer to extend the lead that sparked an 11-2 run by the home team. By the beginning of the second quarter, the Lady Nighthawks had taken a 19-13 lead.

In the second, GSW’s offense was shut down and they were outscored 8-19 by UNG. The Lady Hurricanes simply couldn’t get anything to fall. After two separate runs by UNG, GSW trailed 38-21 at the half.

Samuel opened the third quarter with back-to-back three-pointers, followed by a quick layup, as the Lady Hurricanes started out fast and were looking to close the gap. With 5:05 left in the third, Samuel drained another three-pointer to cut GSW’s deficit down to 11 points, as UNG still held the lead. Layups by Kayla Smith and Lex Chatman closed the scoring gap to nine points with 2:33 remaining in the third quarter. Unfortunately for the Lady Hurricanes, the Lady Nighthawks got another three-pointer to increase their lead going into the final 10 minutes.

Blue finished with 10 points and three steals, while Smith led with a team-high seven rebounds.

The Lady Hurricanes return home for another PBC matchup against USC Aiken at the Storm Dome on Saturday, February 8, at