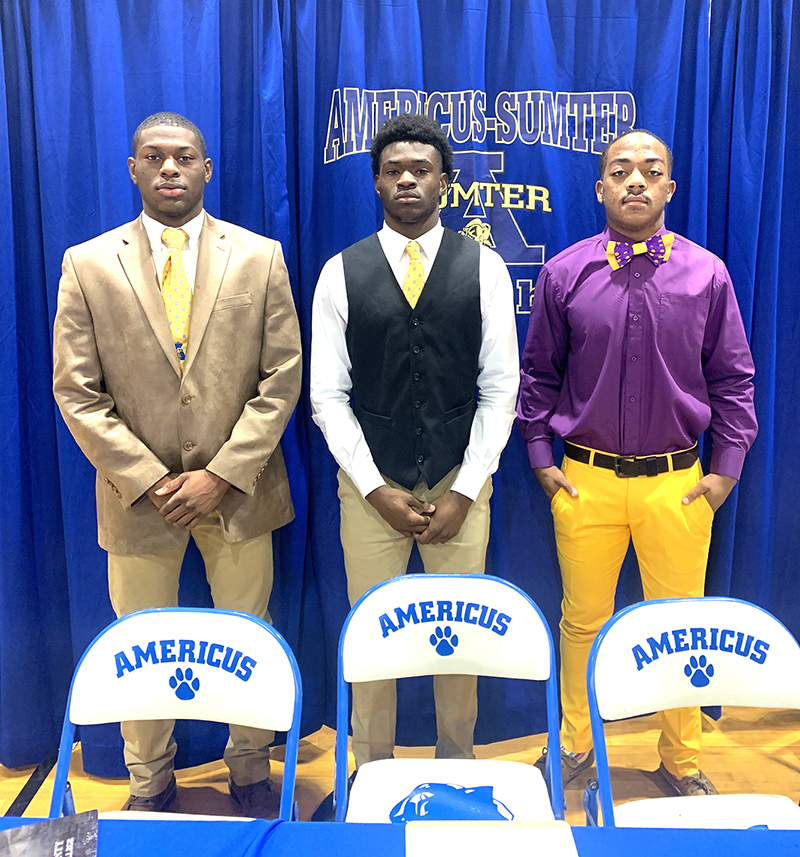 AMERICUS – For three Americus-Sumter student-athletes, their dreams of competing at the college level officially came true on the morning of February 6, 2020, in the gymnasium on the ASHS campus. That morning, in front of their families, friends, teammates and coaches, ASHS football players A.J. Stokes and Trevian Thomas, along with track and field star Keyvontay Nelson, signed National Letters of Intent to continue their education and compete athletically at the college level.

Thomas, a wide receiver and defensive back, will be taking his talents to Jonesboro, AR where he will compete for Arkansas State (ASU), out of the Sun Belt Conference. 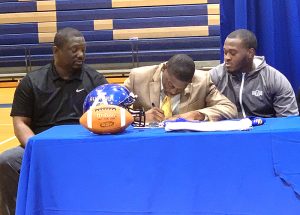 Thomas was recruited by numerous other schools in that conference, along with other schools, such as Liberty University and the University of Arkansas. However, in the end, he felt that ASU was the best place for him.

At first, Thomas was leaning towards Liberty, but one of the ASU coaches convinced him to come to Jonesboro to check out the campus. “I went on a visit and fell in love with the campus,” Thomas said. “They’ve got new facilities and a good atmosphere.”

According to stats compiled on the ASU athletic website: www.astateredwolves.com, Thomas finished his senior season with 63 tackles, had 2.0 tackles for loss, a pair of interceptions and had two pass break ups. He earned first team all-region honors as a return specialist and as a defensive back while leading the Panthers to a 6-6 overall record and a berth in the second round of the GHSA Class AAAA State Playoffs. Thomas was listed as an espn.com three-star recruit and was ranked the No. 195 overall player in the state of Georgia. Thomas was also ranked as the No. 184 safety in the country by 247/Sports. He was also listed as a two-star recruit by rivals.com.

Thomas will compete as a defensive back for the Red Wolves. From an academic standpoint, Thomas will be majoring in Sports Management and would like to come back to Americus to do some coaching and personal training if there is not a future for him in the NFL. 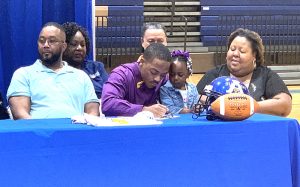 During his senior year, A.J. Stokes was used primarily as an outside linebacker, but was also used as a tight end and, at times, a running back. However, he will be playing linebacker for Bethel University, an NAIA school located in McKenzie, TN.

Stokes had offers from the University of the Cumberlands, Alabama A&M and Tuskegee University, but chose to compete for the Wildcats.

“I loved the campus. I felt like it was home to me,” Stokes said. “When I got there, the coaches were really welcoming to me and my family and I knew it was home from the get go.” Stokes said that he will be used as a linebacker and a strong safety. He plans to major in Sports Exercise Science with a minor in Kinesiology. After graduation, Stokes said that he would like to go to graduate school in the pre-med area to get more education so that he can get involved in athletic training industry. 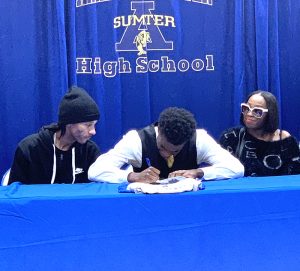 Keyvontay Nelson was also a key contributor for the Americus-Sumter football team, but is also a stellar track and field athlete for ASHS. Therefore, Nelson has decided to take his track and field talents to Neosho County Community College (NCCC) in Kansas. Nelson was recruited by Indiana East University, along with some bigger schools, but decided that NCCC is the place for him for the time being.

After his time at NCCC, Nelson said that he would like to go to LSU to run track, but is not ruling out the possibility of playing football at the next level. “If it’s in the books for me to do it, I will,” Nelson said.

As far as what will be his major in college, Nelson is undecided at this time, but would like to go into Sports Management after graduation.