Once again, Panthers find a way to win 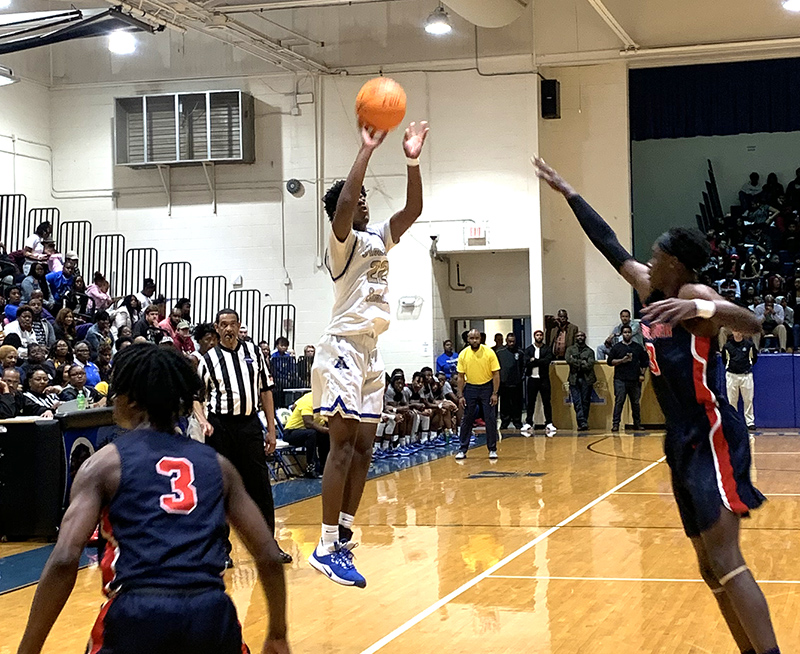 AMERICUS – There is a reason why the Americus-Sumter boys’ varsity basketball team (ASHS) is undefeated at 26-0 and is at least one of the best teams in the state of Georgia, if not the best. It goes beyond the strong basketball skills and the sheer athleticism that the Panthers have. It is attributed to mental toughness, the sheer will to win and the confidence that they will win no matter what is thrown in their way. The Panthers showed these intangibles on Friday, February 7, when they came from behind to beat Westover 45-33 in the semifinals of the Region 1-AAAA Tournament held at Americus-Sumter High School.

Ultimately, those intangibles: mental toughness, the will to win and confidence will be the major factors that might lead to a state championship for the Panthers.

Before Friday night’s third meeting of the year between these two teams, the previous two outings went down to the wire, but in each case, the Panthers made plays, both offensively and defensively, that turned the outcome of both games in their favor. In their most recent meeting on Saturday, February 1, ASHS came back from a 16-2 deficit early in the game and then came back from six points down in the second half to go on and win 59-54. In the first meeting in Albany on Saturday, January 11, the Panthers were able to make plays down the stretch and pulled out a 45-39 victory. In Friday’s third meeting, the Panthers once again came from behind in the second half to take control. Down 31-27 to begin the fourth quarter, ASHS exploded with six unanswered points, capped off by a steal and a basket by Kanova Willoughby, to take a 33-31 lead. From this point onward, they grabbed the game by the throat by closing out the fourth quarter on a 12-2 run to seal the win. 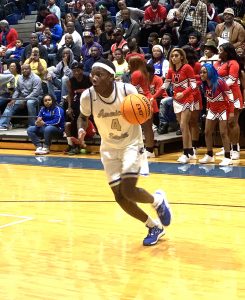 While this wasn’t one of the Panthers’ best games offensively, they got it done with defense. As they have done all season to all of their opponents, especially in crucial situations, the Panthers used their tenacious defensive pressure to force turnovers, turning that defense into offense. Friday night’s Region 1-AAAA Tournament semifinal was no exception.

As for WHS (14-11), they were led in scoring by Isaac Abbide with nine points, while Shamir Wingfield and Kavon Johnson each scored seven points in the losing cause. 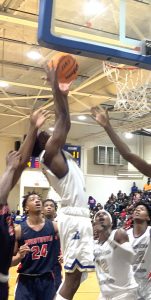 Americus-Sumter senior guard Wallace Bradley rebounds and goes up for a put back. Bradley scored seven points in the win over Westover.
Photo by Ken Gustafson

The Patriots will play in the tournament’s consolation game against Carver on Saturday, February 8, at 4 p.m. The Tigers, having come into the tournament as the #2 seed, lost to Dougherty in the other boys’ semifinal by the score of 59-54.

The Panthers jumped out to a 7-2 lead, which was capped off with a basket and three-point play by JaKontist Gordon. However, the Patriots roared back to tie the game at 7-7 by the end of the first quarter.

The second quarter was an evenly-played quarter between both teams as well, though the Panthers had an 18-13 lead at one point. However, beginning with a three-pointer from Johnson, the Patriots scored seven unanswered points to take a 20-18 lead at the half.

During the first half, the Panthers were able to use their tenacious defense to force the Patriots into committing turnovers, but WHS was able to overcome those turnovers to get themselves back in the game. It was a half in which both teams played an extremely physical and fast-paced brand of basketball. The second half would be no different. 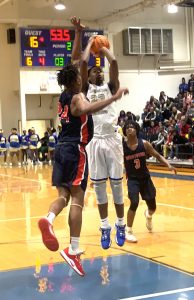 Americus-Sumter junior power forward Darion Mitchell rises up to shoot a jump shot. Mitchell made two free throws in the win over the Patriots.
Photo by Ken Gustafson

The Patriots jumped out to a 27-22 lead in the third quarter, but the Panthers responded with a 5-3 run of their own before timeout was called with 1:11 to play.

Both teams would go into the final stanza with WHS ahead 31-27.

The fourth quarter was where the Panthers won the game. They scored six unanswered points to take a 33-31 lead, which was capped of with that crucial steal and basket by Kanova Willoughby. Willoughby’s basket electrified the ASHS fans in the jam-packed, raucous, standing-room-only crowd in the ASHS gymnasium.

From then on out, ASHS took total control. They went up by as much as 10 and were able to salt away their hard-earned victory.

The Panthers will try to enter the GHSA Class AAAA State Tournament with a record of 27-0 when they face the Jaguars of Dougherty (16-11, 11-5) in the Region 1-AAAA Tournament Championship on Saturday, February 8, at 7 p.m.