Reese scores 1,000th point of her career in ASHS win over Hardaway 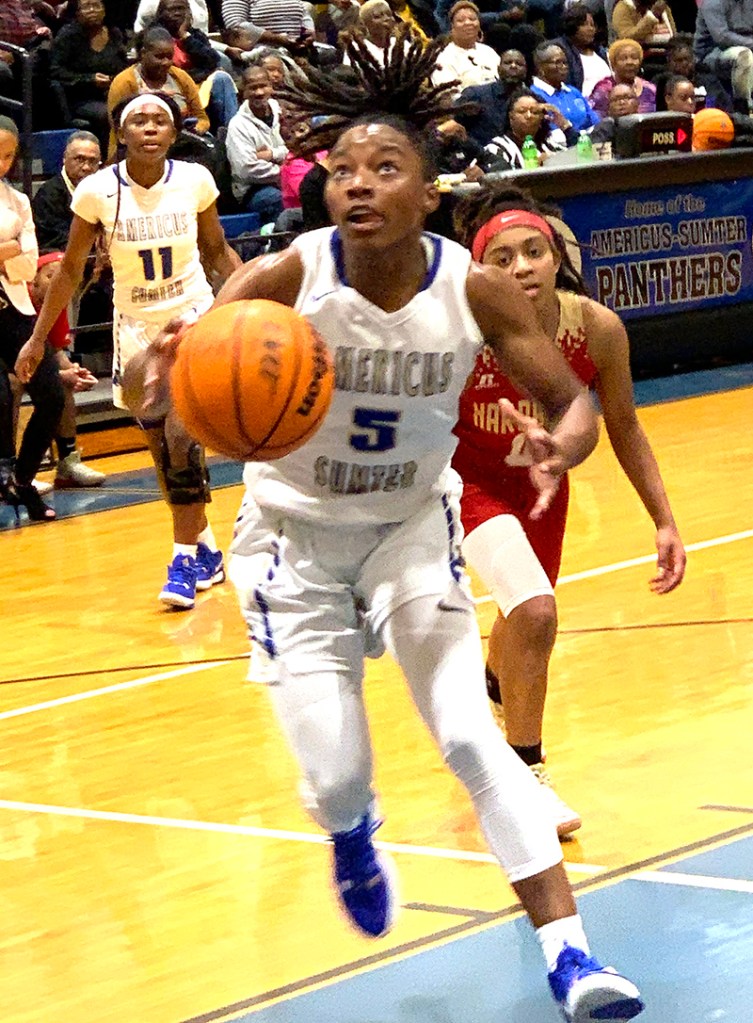 Americus-Sumter senior guard Jelissa Reese scored the 1,000th point of her high school career in the Lady Panthers’ 73-35 thrashing of Hardaway in the semifinals of the Region 1-AAAA Tournament. Photo by Ken Gustafson

AMERICUS – Americus-Sumter senior guard Jelissa Reese scored the 1,000th point of her high school career in the Lady Panthers’ 73-35 thrashing of Hardaway (HHS) in the semifinals of the Region 1-AAAA Tournament on Friday, February 7, at Americus-Sumter High School.

It happened in the fourth quarter, as the Lady Panthers went on an 18-7 run to take control of the game. Reese scored the final basket of that run to give ASHS a 64-35 lead. The Lady Panthers continued their offensive assault by scoring nine more unanswered points to close out the game.

ASHS is now 24-1 on the season and is now one win away from winning the Region 1-AAAA Tournament Championship. Record wise, this 2019-2020 Lady Panther team is the best girls high school basketball team in Sumter County history. 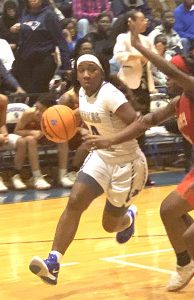 After the first couple of minutes of the game, the score was tied at 4-4, but both teams were off to a slow start. However, as far as the Lady Panthers were concerned, that would soon change. Reese was able to score a basket, which led to ASHS being able to use their full-court pressure defense. As they had done all season, they used their defensive pressure to create turnovers and turned them into points. Reese’s go-ahead basket was the beginning of an 11-0 run, but the Lady Hawks were able to regroup. They went on a 6-0 run of their own to cut the ASHS lead to 15-10 by the end of the first quarter.

In the second quarter, the Lady Panthers took over the game by going on a 12-3 run, stretching their lead to 28-13 with 2:59 remaining before halftime.

Throughout the second quarter, the Lady Hawks struggled offensively and were unable to score in their half-court offense. This was partly due to the defense of the Lady Panthers. However, with less than a minute to play, HHS was able to make a 6-3 run to close out the first half. That run was capped off with a three-pointer by Malika Crawford. By halftime, ASHS had a 30-19 lead.

The Lady Panthers outscored HHS 8-5 over the first couple of minutes of the third quarter, but the Lady Hawks were still hanging around, trailing by 14 at 38-24. During the later stages of the quarter, the Lady Panthers began to struggle on offense and committed a few turnovers. 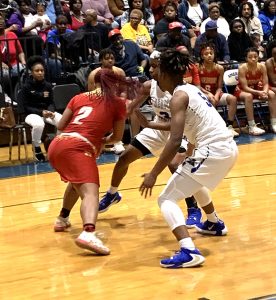 With 1:57 left in the quarter, Tiffani Goodman was fouled while going for a layup, but the official deemed it a flagrant foul, awarding two technical foul shots to Goodman. Goodman hit both foul shots and White scored on a baseline jumper to put ASHS up 46-26.

While they had their struggles in the third quarter, the fourth quarter totally belonged to the Lady Panthers. They outscored HHS 18-7 to take a 64-35 lead. The last basket of that run was scored by Reese, which ended up being the 1,000th point of her career. From that point on, ASHS closed out the game on a 9-0 run to complete the 73-35 victory.

With the loss, the Lady Hawks (11-16) will play in the tournament’s consolation game on Saturday at 2:30 p.m. the Lady Hawks were led in scoring by Deyanna King with nine points.

The Lady Panthers will now face the defending GHSA Class AAAA State Champions, the Carver Lady Tigers, in the championship game of the Region 1-AAAA Tournament. This will determine who will be the #1 and #2 seed out of Region 1-AAAA in next week’s GHSA Class AAAA State Tournament. Tip off for this afternoon’s region championship game is scheduled for 5:30 p.m.

Once again, Panthers find a way to win