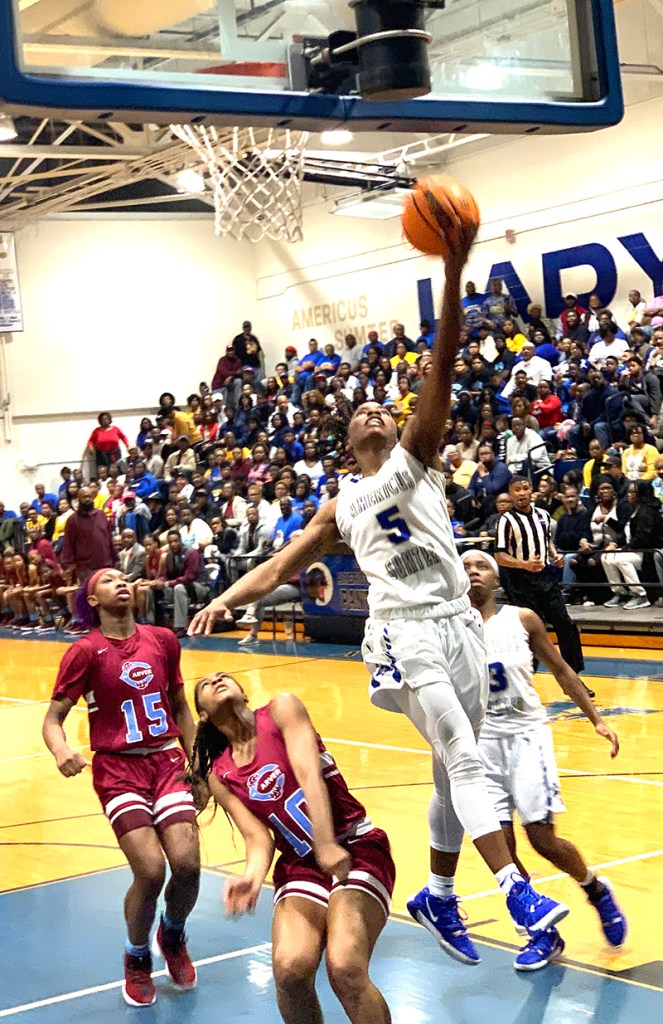 Americus-Sumter senior guard Jelissa Reese goes up for a layup against Carver in the Region 1-AAAA Championship. Reese scored 23 points in the 60-56 loss to the Lady Tigers. Photo by Ken Gustafson

AMERICUS – For only the second time this season, the Americus-Sumter Lady Panthers (24-2) came up on the short end on the scoreboard. In an extremely hard-fought game that couldn’t be decided in regulation, ASHS fell to the Lady Tigers of Carver (CHS) by the score of 60-56 in overtime in the championship game of the Region 1-AAAA Tournament on Saturday, February 8, at Americus-Sumter High School.

The Lady Panthers’ only two losses of the season have come against the defending Class AAAA State Champion Carver Lady Tigers.

The outcome of this game might have been different had the Lady Panthers been more proficient in one facet of the game: free-throw shooting. The Lady Panthers made 9 of 25 foul shots for the game. This is an area that the Lady Panthers have struggled to be consistent in all season and it reared its ugly head in the region championship. It is something that head coach Sherry Harris is trying to get her team to improve on for the upcoming Region 1-AAAA State Tournament.

“First of all, we didn’t close out. We were horrible from the free-throw line,” Harris said. “In the first half, we were 4 for 12. In the second half, we were 5 for 13. You don’t deserve to win. You are in your own gym and you can’t step up there and knock down free throws and we weren’t getting a whole lot of calls anyway, so the few that we did get, we weren’t capitalizing. Right there down the stretch, we had a couple of bad possessions. When we could have made better decisions, we didn’t.” 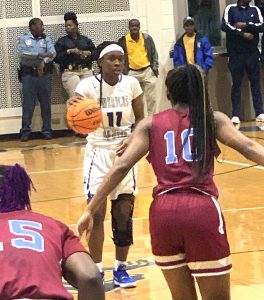 Harris went on to say that her club has been focusing on foul shooting due to the fact that they have been up and down all season and plans to put extra emphasis on that this week before the Lady Panthers take the floor for their first-round game in the GHSA Class AAAA State Tournament. “The difference is when you are trying to beat the defending state champs, you’ve got to be able, in your own gym, to go up there and knock free throws down,” Harris said.

Jelissa Reese, who scored the 1,000th point of her career in the Lady Panthers’ 73-35 win over Hardaway in the region semifinals the night before, led ASHS in scoring with 23 points. Two other players were in double figures. Trinity Jones scored 11 points and Brianna Pope scored 10. De’Asia Ford and Divine White each scored five points and Tiffani Goodman scored two points to round out the Lady Panthers’ scoring.

Enyshuan Jones chipped in eight points for CHS in the winning cause.

Both teams got off to a slow start, but the Lady Tigers took an early 3-0 lead.

With 4:21 to play in the first quarter, Reese finally scored the first two points of the game for ASHS on a jumper and was fouled on the play. She made the free throw and the game was tied at 3-3.

Almost two minutes later, Ford was able to score on the inside to give ASHS a 5-4 lead, but Cochran responded by drawing a foul and sinking two free throws to reclaim the lead for CHS.

Both teams traded baskets for the remainder of the quarter, but the Lady Panthers had a 13-12 lead by the quarter’s end, thanks to a layup by Reese.

Reese continued her hot shooting, as she hit a step-back jumper to begin the second quarter. Over the next minute or so, both teams struggled to score, but Pope was able to score on the inside to give ASHS a 17-15 lead with less than six minutes left before the half.

Both teams traded baskets over the next couple of minutes, but with 1:59 to go before halftime, Jones made one of two foul shots to give ASHS a 22-20 lead. 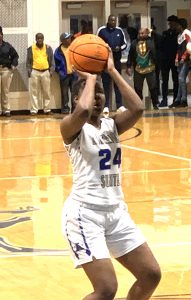 That lead quickly evaporated when Beachman nailed a three-pointer to give CHS the lead, but Reese would sink two free throws to put ASHS back in front 24-23. Then with six seconds left before the half, Reese came through again with a bank shot to give the Lady Panthers a 26-23 lead at halftime.

Reese scored 16 of her 23 points in the first half to lead the Lady Panthers’ attack, while Enyshuan Jones led the Lady Tigers with seven first-half points.

Jones and Reese came out firing for the Lady Panthers to begin the second half. Jones knocked down a three-pointer and Reese scored on a fast-break basket to put ASHS up 31-25. However, over the next several minutes of the third quarter, the Lady Panthers struggled to score. They did not score a point until a little over three minutes to play in the third when Pope knocked down one of two foul shots. By the 3:02 mark of the quarter, ASHS had a slim 32-30 lead.

With 2:51 to go, Ford had a chance to add to the Lady Panthers’ lead at the foul line, but could only make one of two foul shots. CHS responded with five unanswered points to take a 35-33 lead.

The Lady Panthers had chances to score more points, but missed some fast-break layups. They also continued to struggle from the free-throw line as well. However, with just four seconds left before the end of the third quarter, Goodman got a steal and a basket to give ASHS a 40-35 lead.

Both teams traded baskets during the first three minutes of the final quarter, but the Lady Panthers were able to get a steal and a fast-break basket by Reese to give themselves a 46-39 lead with 5:06 to play.

However, Cochran responded with a three-pointer to silence the loud ASHS crowd and also prompted a timeout by Harris to settle her team down.

Over the next 13 seconds, the Lady Tigers scored six unanswered points, capped off with a three-pointer by Beachman. However, Divine White came right back and scored to tie the game at 48-48. As it should be with two of the top teams in the state, it would go down to the wire and then some.

CHS was able to get a go-ahead basket and the Lady Panthers had a chance to tie the game, but Reese’s pass to White went off her hands and out of bounds with 1:12 to play. Beachman would later sink two free throws to increase the CHS lead to four, but Jones responded by driving to the basket and scoring. On the Lady Tigers’ next possession, Beachman was whistled for a double dribble and ASHS responded by tying the game at 52-52 on a put back by Pope with 17.3 seconds left.

The Lady tigers would have one last chance to win the game in regulation, but Beachman dribbled the ball off her foot and the game would go into overtime.

Cochran scored to give CHS a 54-52 lead to start the overtime session, prompting a timeout by the Lady Panthers.

Out of the timeout, ASHS was unable to score and the Lady Tigers decided to be patient on offense. Unable to find a high-percentage shot, CHS called a timeout with 1:57 left. Out of that timeout, Ford was able to get a steal and a tying basket, but Cochran responded with a basket of her own to give CHS the lead back at 56-54.

Then with 1:00 to go, CHS had the ball and Enyshuan Jones was fouled. She made one of two free throws to give the Lady Tigers a 57-54 lead.

The Lady Panthers tried a couple of three-point attempts, but they all were off the mark. CHS got the rebound and Enyshuan Jones was fouled. She made both free throws to give the Lady Tigers a 59-54 lead with 27 seconds left. Reese drove to the basket and scored to cut the deficit to three with 20.7 seconds left, but it would be too little, too late. Diamond McGillberry was fouled and made one of two foul shots to seal the 60-56 win for the Lady Tigers.