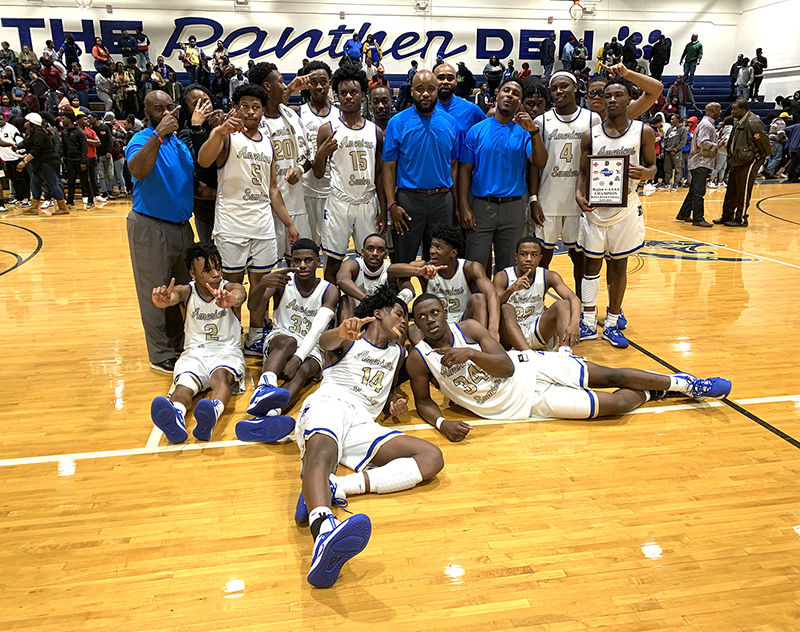 AMERICUS – Once again, as they have done all season, the Americus-Sumter boys’ varsity basketball team found a way to pull out a victory. With just a few seconds on the clock and the score tied at 55-55, ASHS senior guard Wallace Bradley drove to the basket and scored on an off-balanced shot off the glass to help lead the Panthers (27-0) to a 60-55 victory over Dougherty Comprehensive High School (DCHS) in the Region 1-AAAA Championship Game on Saturday, February 8, at Americus-Sumter High School (ASHS).

This is the first time ever in ASHS history that a boys’ varsity basketball team has won a region tournament championship. The Panthers are also currently the No. 1 team in the state of Georgia in Class AAAA.

“It’s wonderful. It’s a great feeling. The guys played hard. They didn’t give up and they kept fighting. We just got the win. I’m proud of them,” ASHS head coach Johnny Genwright said. 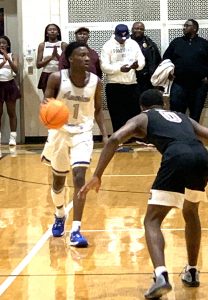 Americus-Sumter senior guard Wallace Bradley scored the go-ahead basket with 1.5 seconds to play to help lead the Panthers to their first ever region tournament championship in school history.
Photo by Ken Gustafson

As for DCHS (16-12), they were led in scoring by Jadyn Shider’s 16 points. Both Elijah West and Will Riggins scored eight points and both Rod Jones and Lavonta Clyde chipped in six in the losing cause.

The Panthers got off to a slow start and found themselves trailing 8-1 in the first quarter. However, they were able to regain their footing by going on an 8-4 run to cut their deficit to 12-9. Then with 2:10 to go, Brown knocked down two foul shots to bring ASHS back to within one at 12-11. 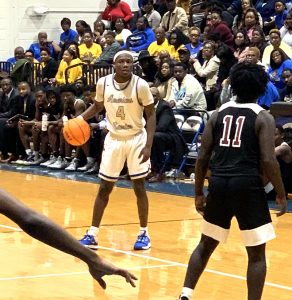 For the rest of the first quarter, the Jaguars were unable to score and just before the buzzer sounded to end the quarter, Gordon nailed a three-pointer from the corner and was fouled. Gordon made the foul shot to complete the four-point play and the Panthers were in front 15-12 to begin the second quarter.

ASHS came out on fire to begin the second quarter, as Bradley threw an alley-oop pass to Quevoluia Willoughby for a slam-dunk. This was the beginning of a 4-0 run by ASHS before DCHS head coach Bakari Bryant called timeout.

The Jaguars still had gone without a basket by the 6:06 mark of the second quarter until Clyde scored to cut the ASHS lead to 19-14.

Both teams traded baskets over the next two minutes, with ASHS leading 24-20.

However, over the next minute, the Panthers went on a 5-2 run, which was capped off by a jump shot from McCoy. For the remainder of the half, there wasn’t much scoring from either team and the Panthers went into halftime leading 30-25.

ASHS went on a 6-2 run to start the second half, capped off by two free throws from Quevoluia Willoughby. However, the Jaguars wouldn’t go away. Shider was able to score on the inside to cut the DCHS deficit to 36-31 with close to three minutes left in the third quarter. Shortly thereafter, Shider struck again with a basket, bringing the Jaguars to within three. However, as the horn sounded to end the third quarter, Gordon once again made a three-pointer and was fouled while shooting. He made the free throw to complete the four-point play and the Panthers went into the fourth quarter leading 41-34.

Two and a half minutes into the fourth quarter, the Panthers led 42-36 before Gordon was fouled again while shooting a three-pointer. He missed the shot, but was able to make all three foul shots to put ASHS up 45-36. 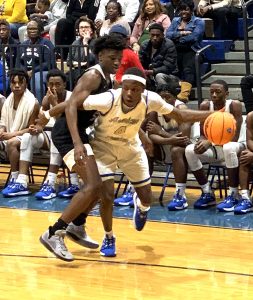 Trae Brown tries to drive past a DCHS defender.
Photo by Ken Gustafson

However, over the next minute, the Jaguars outscored ASHS 6-2, including a made free throw from Riggins. McCoy responded for ASHS with a layup at the 4:07 mark when timeout was called.

With 1:41 to go in the game, DCHS was still in it, trailing 51-46. Jones drove to the basket, was fouled and made both free throws to put DCHS within three points. Then the Jaguars got a steal and Riggins was fouled while shooting. He made one of the foul shots to bring DCHS within two at 51-49.

On the Panthers’ next possession, Brown was fouled and made both foul shots to put ASHS back up by four at 53-49 with 49.9 seconds to go. However, DCHS was not quitting and the Panthers’ unbeaten streak was very much on the line.

It appeared as if the game was going to be one or lost at the foul line. Riggins was fouled on the jaguars’ next possession and made one of two free throws, cutting the ASHS lead to 53-50 with 43 seconds left. On the inbounds pass, Bradley was fouled and went to the line. However, he only made one of the two foul shots, which left the door still ajar for the Jaguars. Shider was able to score a quick basket with 34 seconds to go to cut the Panthers’ lead to 54-52. 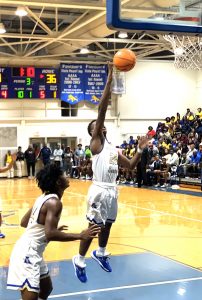 Once again, the Jaguars fouled right after the inbounds pass and Bradley went to the foul line, but once again, Bradley made only one free throw. At that moment, it proved to be costly, as West nailed a three-pointer to tie the game at 55-55 with 19 seconds to go in regulation.

However, as they have done all season in close, tight games, the Panthers found a way to win. With just a few seconds left in regulation, Bradley drove the ball to the basket and made a tough shot off the glass to give the Panthers a 57-55 lead.

With 1.5 seconds left, a traveling violation was called against DCHS after the inbounds pass was made and DCHS Head Coach Bakari Bryant was whistled for a technical foul for arguing the call. He then went on to the court and was assessed another technical foul, meaning that he was automatically ejected from the game.

Bradley made three of the four technical foul shots to seal the monumental victory for ASHS.

The Panthers are now five wins away from doing something that hasn’t been done in Sumter County since 1967. That was the last time a boys’ high school basketball team from Sumter County won a state championship. Back then, Union High School in Leslie, led by head coach Ben Strickland, won the Class C Boys’ State Championship by defeating Greenville High 58-48 and finished their remarkable season at 28-6. As far as ASHS is concerned, their last boys’ state championship in basketball came in 1961, when the Panthers of Americus High School (25-3), led by head coach Jimmy Hightower, defeated Winder-Barrow 52-47 to win the Class A Boys’ State Championship.

Last year’s ASHS boys’ squad very nearly brought home a state championship to Americus and Sumter County. The 2018-2019 Panthers, led by head coach Michael Hoffpauir, who is now at Monroe (Albany), made it all the way to the GHSA Class AAAA state finals before losing to Carver (Columbus) 58-55. Several of the players who were on that squad are on this year’s undefeated ASHS squad and are eager to taste state championship glory this time around. Should they succeed, they will be the first ever high school basketball team, guys or girls, from Sumter County to win a state championship with an unblemished record and one of the few teams in Georgia High School Basketball history to do so.

The GHSA Class AAAA State Tournament will begin this weekend and the Panthers, being the No. 1 seed out of Region 1-AAAA, will host Thomson, the No. 3-seeded team out of Region 3-AAAA, in their first-round game on Saturday, February 15, at 5:30 p.m.

Reese scores 1,000th point of her career in ASHS…