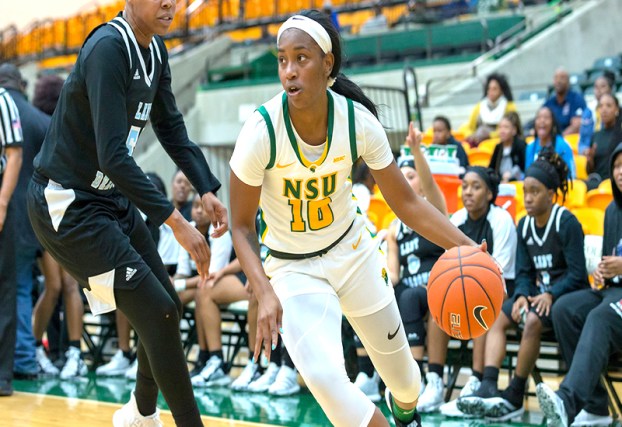 La’Deja James (10) is shown above playing for Norfolk State University, where she earned the National Player of the Week honors. Photo by NFSU Athletics

A native of Virginia Beach, VA, James played for the Lady Jets from 2015-2017. The 5’ 8” guard was selected as the Georgia Collegiate Athletic Association Division I women’s basketball player of the week four times as a sophomore during her time with SGTC.

The Lady Jets won the GCAA conference title again during James’ sophomore season and finished the season with a 29-4 record. SGTC was ranked 16th in the nation and earned the right to go to the NJCAA national tournament for the fourth time in the history of the program. They also won the NJCAA Region XVII title and District J Championship. 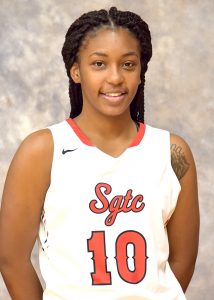 La’Deja James (10) is shown above as a sophomore at South Georgia Technical College.
Photo by Su Ann Bird

James joined the Norfolk State University Lady Spartans in 2018-2019 after redshirting during the 2017-2018 season. She was named the team’s MVP as a junior while playing in 21 games and starting 16. She averaged 13.3 points, 4.7 rebounds, 1.6 assists and 2.3 steals a game. James also led the Spartans in scoring average, steal average and three throw percentage. She scored in double figures in 18 games and led NSU in points on 13 occasions. She was also named the MEAC Defensive Player of the Week and was named to the All-MEAC Tournament team.

This season, James was selected as the National Player of the Week by BOXTOROW, as she averaged 31.5 points, 6.5 rebounds, 4.5 assists, 3.0 steals and shot 59% from the field in two wins for the Spartans the previous week. With those wins, the Spartans remained tied for first place in the MEAC with Bethune-Cookman.

Against North Carolina Central, James poured in a season high 36 points on 12 of 18 shooting and four of six from three-point range. James tallied nine rebounds, four assists and two steals and is currently tied for fourth in the MEAC in scoring (13.6).