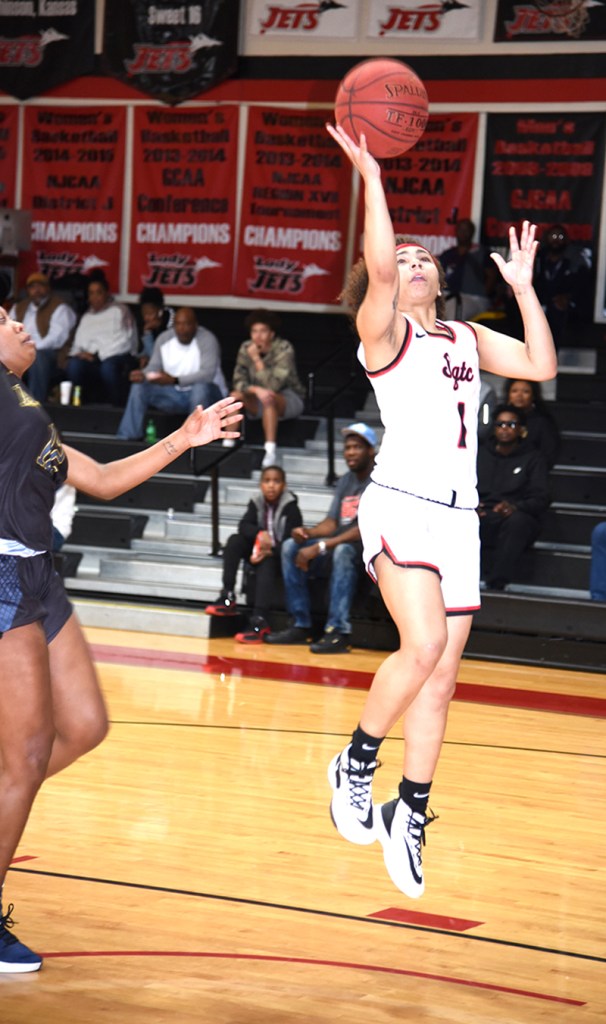 South Georgia Tech’s Shamari Tyson (1) had 20 points for the Lady Jets. Tyson was four of six from the three-point line and two of two from the free throw line. Photo by Su Ann Bird

AMERICUS – The South Georgia Technical College (SGTC) Jets and Lady Jets hosted Andrew College during the school’s Alumni – Sophomore Day celebration on Saturday, February 8, before a large crowd at the Hangar on the SGTC campus.

All those in attendance were treated to a magnificent display by the nationally ranked Lady Jets, as they dominated their way to a 101-54 Georgia Collegiate Athletic Association (GCAA) conference win, while the Jets lost 73-68 to the Tigers of Andrew College (AC).

The Lady Jets’ win over the sixth-seeded Andrew College Lady Tigers propelled the top-ranked 15-0 SGTC women’s basketball team one step closer to their fourth consecutive GCAA regular season conference title. With that win, the Lady Jets improve to 25-2 overall on the season.

Even though the crowd was routing for a sweep on the Alumni – Sophomore Celebration Day, the Jets just couldn’t pull it out and fell to AC for the second time this season in a narrow loss. This was the Jets 10th loss this season by seven points or less. The SGTC men’s basketball team is now 10-15 overall and 3-8 in the GCAA.

“I thought the Lady Jets played exceptionally well in the first half against Andrew College,” SGTC women’s head coach James Frey said. “We hit nine of 15 attempts from the three-point line in the first half to shoot above 60 percent. We did not do that well in the second half, but overall, we shot about 50 percent from the field.”

The Lady Jets were up 62-25 at the end of the first half and went on to capture the 101-54 victory in the second half.  Five Lady Jets scored in double-figures in that game. Sophomore Shamari Tyson had a total of 20 points, eight rebounds and five assists. Sophomore Anna McKendree was closed behind with 15 points, two rebounds, five assists and three steals. Niya Goudelock and Veronica Charles both added 14 points, while Goudelock had one rebound, three assists and four steals. Charles did more than score, as she had one rebound and one assist. Oumy Gueye closed out the double-digit scoring with 11 points, three rebounds and one assist.

Femme Sikuzani accounted for nine points and five rebounds. Yasriyyah Wazeerud-Din came up with eight points and Moe Shida had six points. Flore Ngasamputu and Hope Butera closed out the scoring with two points each.

Following the one-sided victory for the Lady Jets, the Jets came out and kept battling with the Tigers for the lead. In the first half, there were three lead changes and three ties before AC went up 35-33 at halftime.

The Jets continued to battle back and overcame a nine-point deficit within the last five minutes to pull closer until the Tigers took command and secured the 73-68 victory. 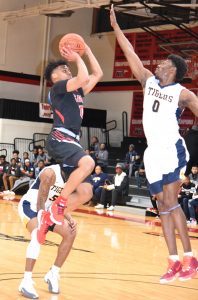 SGTC Sophomore Toriano Lewis (0) drives for the basket. Lewis had 12 points for the Jets in the loss to Andrew College.
Photo by Su Ann Bird

Sophomore Justin Johnson led the Jets in scoring with 14 points, Toriano Lewis added 12 points and Jarius Carroll poured in 11. Jaylen McKinney came up with nine points, Jalen Reynold had six and both Lamont Sanders and Merdy Bata each had four points. Denari Garrett, Tabais Long, DJ Fisher and Jonathan Kanyanga claimed two points each to round out the SGTC scoring.

As far as the Lady Jets are concerned, they have four games remaining before the NJCAA Region XVII tournament.

Both the Jets and Lady Jets will host Georgia Highlands on Wednesday, February 12, at 5:30 p.m. and 7:30 p.m. The two teams will then travel up to Southern Crescent Technical College on Wednesday, February 19, for a double-header in Griffin at 5:30 and 7: 30 p.m. The Lady Jets will then travel down to Albany Technical College on Saturday, February 22, for their last regular-season conference game. Tip off for that game is scheduled for 1 p.m.