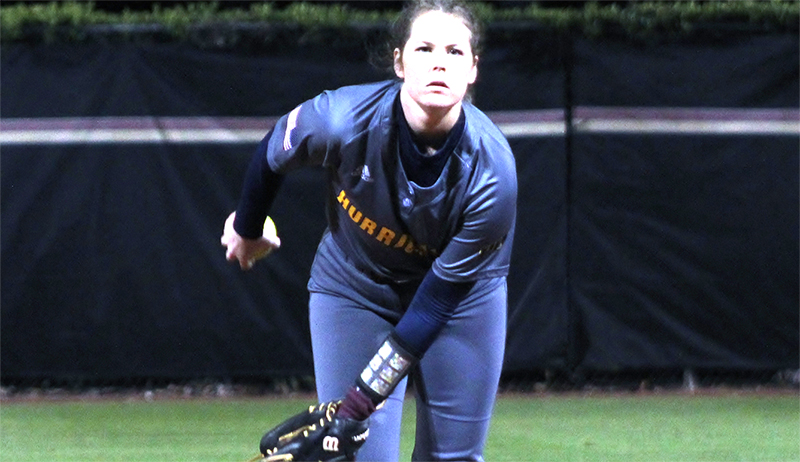 GSW senior pitcher Jennifer Jernigan pitched a perfect game in Game 2 of a two-game series between Georgia Southwestern State University and Fort Valley State. Jernigan gave up no runs or hits in that game. Photo by Chris Lind

The Lady Hurricanes are now 6-2 overall on the young season and have won five straight games.

Both Katelyn Wood and Aimee Oglesby each finished with a home run, while Chloe Zoeller and Allyson Murdock ended the doubleheader with triples.

In Game 1, Zoeller hit a triple into left field to start the game, as she started on a high note in the bottom of the first. With one out, Kimmy Singer successfully bunted down the right field line, scoring Zoeller to put GSW up 1-0.

In the bottom of the second inning, Murdock singled and advanced all the way to third base on a wild pitch. Another wild pitch later, Murdock went flying across the plate for a run. Jacie Johns followed that up with a sacrifice fly into left field to increase GSW’s lead to 3-0.

Wood kicked off the bottom of the third with her second home run of the season. After reaching first on an error, Mackenzy McFarland was able to advance three bases to get plated for a score. Soon after that, Murdock picked up an RBI when she singled into right field. FVSU scored off a wild pitch in the top of the fourth, but the Lady Hurricanes showed no mercy in the next inning, as they scored seven runs to take the 13-1 victory.

GSW (5-2) ended the bottom of the fourth with seven runs and seven hits, as Kuerzi had a two-run double. Shannon Gibson picked up her third win of the season in 4.0 innings, giving up two hits and one run while striking out two Wildcats.

In Game 2, the Lady Hurricanes did what they had done in Game 1. They jumped on the Lady Wildcats early and secured a 13-0 victory to sweep the two-game series. Early in the game, what looked like an inside-the-park home run wasn’t the case, as Zoeller started the inning with a double into left field. An error was committed by the outfielder, which allowed Zoeller to score to give GSW an early 1-0 lead.

In the bottom of the second, Jenna Hollomon doubled into left field, allowing McFarland to score for GSW. Oglesby followed that up by hitting a two-run home run over the center field wall on her first at bat of the evening. Morgan Mullin picked up a two-run double, as several other Lady Hurricanes scored and accounted for nine runs in the inning.

With two outs, Murdock picked up an RBI triple in the bottom of the fourth for GSW (6-2). Zoeller hit an RBI single and Johns followed with an RBI double, as GSW ended Game 2 in five innings also, winning 13-0. Freshman Hannah Holloway relived Jernigan in the fifth and picked up two strikeouts to end the game.

Up next for the Lady Hurricanes is a trip to Columbus, GA to compete in the Cougar Classic Friday and Saturday, February 14-15. They will take on Albany State on Friday at 2 p.m., followed by a Friday evening contest against Coker College at 7 p.m. On Saturday, February 15, the Lady Hurricanes will face Queens University at 11 a.m. and will finish up the Cougar Classic with a game against Union University Saturday afternoon at 3 p.m.