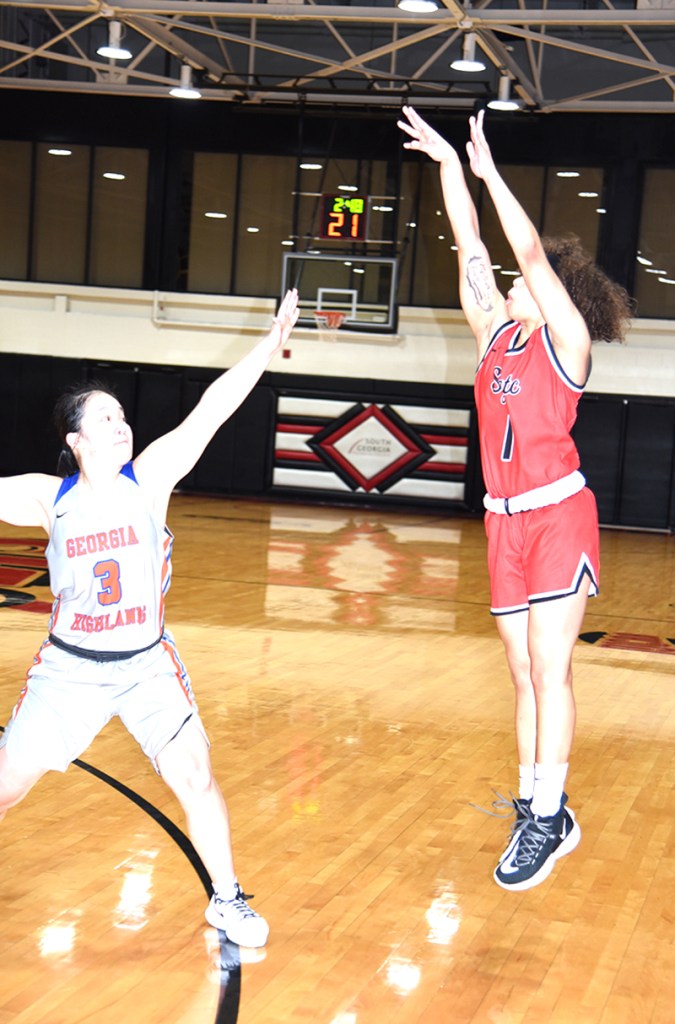 The Lady Jets were down by 22 points before making the comeback to get the win.

While the Lady Jets were able to make an epoch comeback, the SGTC men’s basketball team wasn’t as fortunate. The Jets fell to GHC 70-66 after having an early 13-point lead.

“This was an unbelievable game,” SGTC women’s head coach James Frey said.. “I couldn’t believe it when we got behind 22 points with a little over a minute left in the first half. It was like a bad nightmare. We were only hitting 22 percent of our shots. We were two of 13 from the three-point line and then we were three of 11 from the foul line.”

The Lady Jets were able to cut that deficit to 18 points by the end of the first half, but went into the locker room down 39-21. This was the largest deficit that the Lady Jets have had to overcome this season. The Lady Jets’ only two losses this season were by seven points or less. Their first loss was to St. Petersburg College by the score of 66-59 in the third game of the season. Their second loss was to nationally ranked Shelton State 68-63 in the Lady Jets Holiday Classic after Christmas.

But just as unbelievable as the first half was, the second half was even more so. The Lady Jets never panicked. In the third quarter, they were still down by 20 points with 4:45 remaining on the clock. They outscored Georgia Highlands 14-2 in less than four minutes to close the gap to 49-41 with 1:11 remaining. GHC responded by scoring four unanswered points to pull ahead 53-41 at the end of the third quarter. 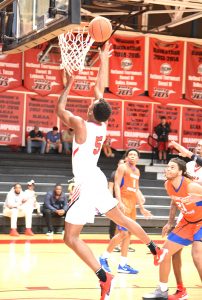 SGTC sophomore Justin Johnson (5) was the leading scorer for the Jets in their narrow 70-66 loss to Georgia Highlands College.
Photo by Su Ann Bird

In the fourth quarter, the Lady Jets outscored Georgia Highlands 27-13. They finally got their first lead of the game with 24.7 seconds remaining when Shamari Tyson hit a jump shot to put them ahead 66-64. She then hit another shot with 4.6 seconds to clinch the victory. Tyson had 15 points in the last five minutes of the game.

“I can’t say enough good about the way our team played in the fourth quarter,” Coach Frey said. “Like Dr. Watford said, they refused to lose.”  With less than a minute remaining in the game, Tyson got sick, but she went back on the court and was the difference in the game.”

The NJCAA third team All-American had some help from her teammates. Sophomores Yasriyyah Wazeerud-Din and Anna McKenzie closed out the night with 11 and 10 points respectively. Yasriyyah Wazeerud-Din hit five consecutive free throws in the second half and McKenzie hit two three-pointers. McKenzie also came up with three rebounds, four assists and four steals.

Sophomore Oumy Gueye came off the bench and scored six points, four of which were in the fourth quarter. Freshman center Femme Sikuzani scored five points, recorded six rebounds and tallied one steal. Hope Butera accounted for three points and both Veronica Charles and Moe Shida had two points each.

This was the Lady Jets’ eighth GCAA regular season conference title in the 15-year history of the program. It was Coach Frey’s sixth in the past seven years and his sixth in eight years as head coach of the Lady Jets. The SGTC women’s team is currently 36-0 in the conference over the past two seasons.

The Lady Jets still have two regular season conference games left, but the win over GHC allowed them to clinch the title and earn the right to host the NJCAA Region XVII tournament semi-finals and finals on Friday and Saturday, February 28-29.

The winner of the Region XVII tournament will travel to the winner of the Region X site for District J championship game on Saturday, March 7, for the right to advance to the national tournament. Spartanburg Methodist College (SMC) from Spartanburg, South Carolina is currently leading that Region with a 4-1 conference record and a 16-7 overall record. The Lady Jets played SMC in the Lady Jets Thanksgiving Classic and won by the score of 77-57.

Following the Lady Jets action, the Jets took to the court. The two teams matched up pretty evenly throughout the game despite GHC’s top ranking in the conference with a 10-1 and 19-5 overall record.

The Jets were ahead 31-21 at the end of the first half and were able to maintain that lead throughout the first six minutes of the second half. GHC went up 40-38 with 13:11 remaining in the game. The two teams battled back and forth for the next five minutes, but the Chargers took a 53-51 lead with 8:03 left on the clock and never relinquished it.

SGTC’s men closed the game to 67-66 with 10.1 seconds on the clock and regained the ball for a last-chance shot to win. However, a turnover and two fouls in 10 seconds allowed GHC to hang on to the 70-66 win and remain in first place in the GCAA Division I men’s standings. The Jets are currently seventh in the conference at 3-9 and 10-16 overall.

Both the Jets and the Lady Jets will travel to Southern Crescent for a conference double-header on Wednesday, Feb. 19, at 5:30 and 7:30 p.m. The Lady Jets travel to Albany Tech for their last regular season game on Saturday, Feb. 22, at 1 p.m.