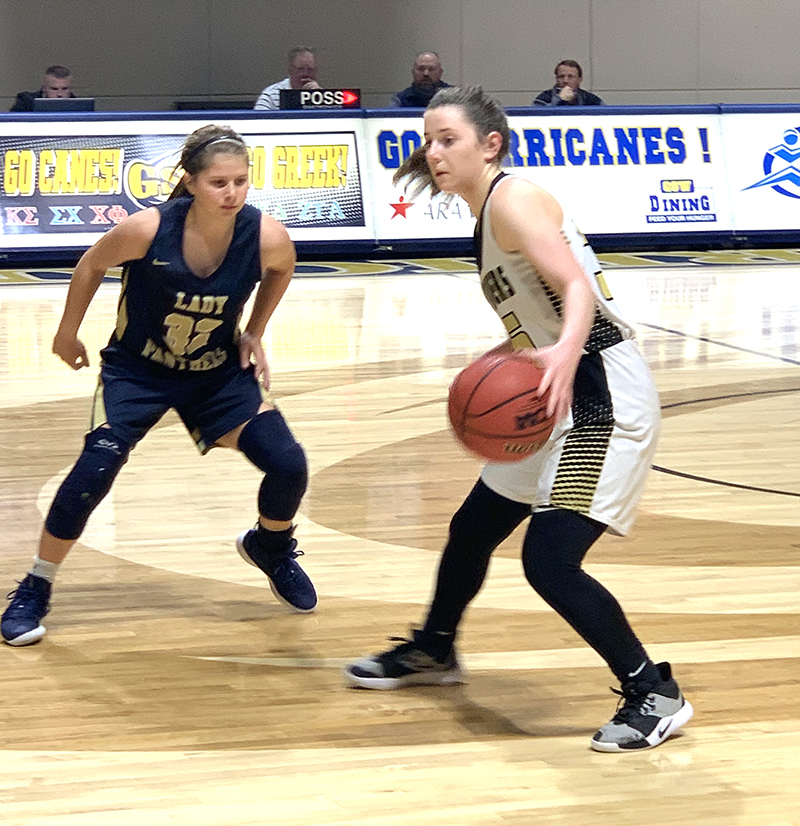 AMERICUS – Having lost in the first round of the GISA Region 3-AAA Tournament the night before to Brookwood, the Southland Lady Raider Basketball Team wanted to salvage a third-place seeding when they took the floor at Randolph Barksdale Court in the GSW Storm Dome against the Lady Panthers of Tiftarea Academy (TA) on Friday, February 14. Though they had a lethargic first half, the Lady Raiders (SA) came alive in the second half, as they went on a 12-4 run in the third quarter. That run helped propel the Lady Raiders (17-6) to a 34-26 victory over the Lady Panthers.

“We’re not very deep this year. We’ve had some injuries and all,” SA Head Coach Ty Kinslow said. “We played Brookwood, who full-court presses for 32 minutes. Tiftarea played Deerfield, who full-court pressed, and they don’t play many. We knew that it was going to be a sluggish start, with both of us playing six or seven players.” Kinslow went on to say that after some adjustments were made at halftime, his club played extremely well in the second half. 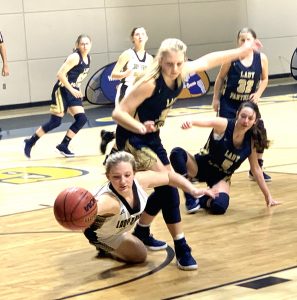 Southland Academy guard Ansley Weldon dives for the ball as it goes out of bounds.
Photo by Ken Gustafson

As a result of the win, SA has secured third place out of Region 3-AAA and will play the #2 seed from another region in the GISA Class AAA State Playoffs next week. Date, time, opponent and venue are all still to be determined.

Riley Mitchell led SA in scoring with 12 points and Maddie Crisp poured in 11 points. Morgan Weaver scored eight and Holly McCain had three points in the winning cause.

The Lady Raiders jumped out to a 7-0 lead to start the game, but TA responded with five unanswered points to close out the first quarter. 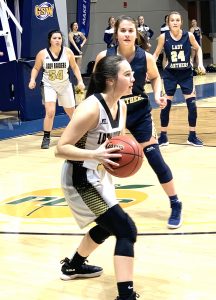 Early in the second quarter, the Lady Panthers enacted some full-court pressure, which caused some problems for SA’s offense. However, the Lady Raiders were able to settle down offensively and exercised patience on offense in the latter stages of the quarter. Then with a little over a minute to play before halftime, Mitchell hit a jumper from the top of the key to give the Lady Raiders a 12-7 lead.

However, with 20 seconds to play, TA guard Carlie Strenth nailed a three-pointer to cut the SA lead to 12-10 by halftime.

It was a sluggish first half for both teams, but both teams came out firing early in the third quarter. Mitchell knocked down a jumper for the Lady Raiders, but Strenth responded with another three-pointer.

SA responded with four unanswered points. McCain scored for SA to give the Lady Raiders a 16-13 lead and Crisp followed that up by scoring on the dribble drive to increase the SA lead to five. Unlike the first half, both teams scored quickly in the early stages of the second half. 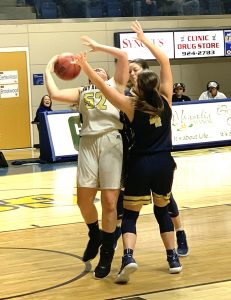 With 3:58 to go in the third quarter, Crisp extended SA’s lead to 21-14 on a running one-hander. Mitchell followed that up with a three-pointer and the Lady Raiders were up 24-14 in the waning minutes of the third quarter. During this part of the game, the Lady Raiders also intensified their defensive pressure, which made it difficult for TA to get off good shots. By the start of the fourth quarter, SA had a 25-14 lead.

However, TA wasn’t going away. Livi Mullis hit a jump shot to bring the Lady Panthers to within nine at 25-16, but SA responded with four straight points to push the lead back up to double digits. Mitchell extended SA’s lead to 31-16 when she drove straight to the basket for a layup. With around four minutes to play in the game, Crisp scored another basket for the Lady Raiders, prompting a timeout by the Lady Panthers.

However, from that point on, the Lady Raiders were not seriously threatened and went on to win 34-26.

Carlie Strenth led the Lady Panthers in scoring with eight points and Ally Pate chipped in seven in the losing cause.

Stay tuned to the Americus Times-Recorder for updates on the date, time, opponent and location of the Lady Raiders’ first-round game of the GISA Class AAA State Playoffs.