A long-time local resident, describing the location of a different building, first mentioned the Kentucky Fried Chicken. “It’s on Highway 19 near that ugly old KFC,” she said. Something in my reaction (perhaps a confused stare) gave her pause. “I hope that’s not offensive. Maybe you think it’s a historic building. But I think it’s an eye-sore.” Fair enough. The next time I drove up Martin Luther King Jr. Blvd., I began looking for this eye-sore of a historic restaurant. There was only one possibility: a narrow, rectangular building with a goofy roof.

A second reference in an old magazine piqued my interest. Bill Cutler (not to be confused with Kutzler) published, “Americus the Beautiful: The Town that Kept the Carters Out,” the same month President Carter lost reelection. Although insightful at times, Cutler could not compliment Americus without ridiculing the city or its people in the same breath. Three years later, Cutler went on to co-found the Atlanta-based food guide Knife and Fork. It should come as no surprise then that Cutler looked down on local dining. “After Carter’s election,” he wrote, “fast-food franchises started springing up around town, the first of them Kentucky Fried Chicken, now out of business. The eastern edge of Americus is now littered with such places.” Littered. Cutler was swearing without swearing. 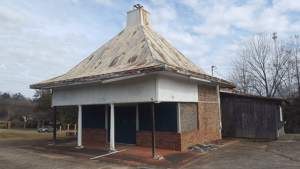 The first KFC in Americus, January 2020

After decades of running a small restaurant in Corbin, Kentucky, Harland Sanders turned his business into a franchise in the 1950s. By the end of the decade, more than 200 restaurants sold chicken fried in his patented pressure cookers with a secret recipe of “11 herbs and spices.” For the right to sell his special recipe chicken from his patented fryers, Sanders’s company received $0.05 for each piece of chicken sold by a franchise. In 1964, Sanders sold his interest in the business to a group of investors led by John Y. Brown Jr. and Jack C. Massey for $2,000,000. As part of the deal, Sanders retained ownership of KFC franchises in Canada and the U.K., kept a lifetime salary, and continued to serve as a traveling promoter of the franchise.

The nature of the franchise changed under the new leadership. Under Sanders, franchises served Kentucky Fried Chicken products alongside whatever else the franchisee wanted to offer. The new owners took tighter control over new business, establishing new carryout restaurants and insisting that franchises only serve Kentucky Fried Chicken products. In 1966, just two years after the franchise changed hands, investors netted $15,000,000 in sales and the private company went public on the New York Stock Exchange. By the end of the decade, KFC (although not its official name, the restaurant was widely known by its initials) had 3,000 franchises in 48 countries.

The new leadership also began to standardize the appearance of new franchises. Beginning in the 1960s, the take-out restaurants began to take on a similar form: a rectangular building with a narrow façade; ornamental columns; and large glass windows. Many buildings had two roof lines. There was one overhanging roof with a steep pitch—almost pyramidal—leading to an ornamental cupola topped with a weathervane and a Colonel Sanders figurine. Beyond this roof often extended a lower flat roof. Exterior walls were painted red and white; an alternating pattern of white and red—like the stripes on the U.S. flag—adorned the steeply pitched roof.

This style of KFC came to Meadowbrook Drive in Americus in 1968. Meadowbrook, a portion of Highway 19 that intersects with McGarrah Street, became Martin Luther King, Jr. Blvd in December 1992. The city changed the name at the request of Rev. Ferrell Malone, of Bethesda Baptist Church, and the MLK Ministerial Association. Despite changing the name, local phone directories continued to refer to the Martin Luther King, Jr. Blvd as Meadowbrook well into the twenty-first century.

Few would question the historical significance of a late-nineteenth century commercial building in downtown Americus. Those buildings represent one historical layer in which large, multi-story commercial buildings became more common than their wooden predecessors. Buildings like the old KFC also represent a broad historical and architectural trend. “Greater mobility, the rise of consumerism, new construction techniques, and design theory that eschewed the past” architectural historian Lauren Patterson writes, “combined to create a unique suburban landscape that is reflected in commercial resources.” In other words, changes in mid-century America—spending habits, automobile dependency, and the rise of “chain” restaurants—brought KFC to Americus. The building is a local symbol of mid-century commercial architecture and the rise of a fast food, high-speed nation.

The early KFC represents an architectural era that urban geographer Larry Ford termed the “Classic Auto Strip.” This period began about 1948 with the first drive-in McDonald’s. It lasted for two-and-a-half decades until higher real-estate prices, environmental concerns, and, the OPEC oil embargo pushed architects toward different designs. During that quarter century, the number of registered automobiles in the United States rose from less than 33 million to 101 million. In commercial buildings, construction materials like steel and glass often became part of a building’s ornamentation and large glass windows lured in customers.

It also led to a shift in language. While the KFC street address was Meadowbrook (now Martin Luther King Jr. Blvd), the road was often referred to by its state name, Highway 19. The KFC was built not in downtown Americus but on the periphery along the highway to Atlanta and Florida. It catered as much—or more—to people driving through Americus and those living on the edges of town as it did to those in the soon-to-be-called historic district. This Classic Auto Strip was part of the modern mid-century Americus.

The building sits at the corner of a deadly intersection without a safe entrance except from McGarrah Street. Perhaps the same driving patterns that made Highway 19 an appealing location also led to the restaurant’s abandonment twelve years after opening. When Bill Culter came to Americus, the building sat vacant. Culter was incorrect though to credit (or blame) KFC’s arrival on Jimmy Carter; likewise, he was wrong in thinking that KFC left town. It simply moved to East Forsythe Street and remained there until the mid-1990s.

The old KFC went through periods of long-term vacancy. Only one other business seems to have made long-lasting changes to the building. Fading paint today reveals not an advertisement for KFC but for “The Rib Rack.” Like other restaurants, Rib Rack moved around Americus. In the mid-1990s, Rib Rack was on Tripp Street, but it moved to the old KFC building by 1998. It remained there until 2006 when it moved briefly to 113 West Forsythe Street before closing for good.

Upon reflection, the first KFC in Americus represents the arrival—or, at least, intensification—of international chain restaurants coming to town. The structural integrity is also impressive. When Jennifer Betsworth, a historic preservation specialist at New York State Historic Preservation Office, saw the building on social media, she wrote, “I’m pretty astonished by how intact it looks!” The windows and doors are covered with wood. The red and white paint on the roof has faded. Two of the columns have been replaced with four-by-fours. Rib Rack probably added the drive-thru on the southern elevation of the building. The Colonel Sanders weathervane is missing from the building but not lost. During the Rib Rack era, Chuck Smith recovered the architectural detail. It now sits in his living room. Aside from than these small changes, the KFC is a fine example of an early franchise history and mid-century commercial architecture. 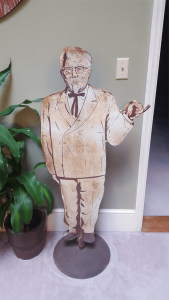 The building is in such good shape that one can almost imagine the painted lettering that once adorned the pediment. An early KFC in Athens, Georgia, with the exact same model had a center panel that read, from top to bottom: Col. Sanders’ Recipe | Kentucky Fried Chicken | *Take Home Service*. The left panel left read: Internationally Famous; England & Canada | United States | Hawaii. The right panel contained the company’s famous boast: “It’s Finger Lickin’ Good.”

The building’s location at a perilous intersection may have played a role in preserving it. Without an easy way in or an easy way out, there seems to be no immediate threat to the building beyond the slow decay of vacancy. Yet there is the rub. Preservation by neglect is still, over time, destructive. It seems unlikely the old KFC will see reuse.

And yet, it would make for a nice tattoo parlor. 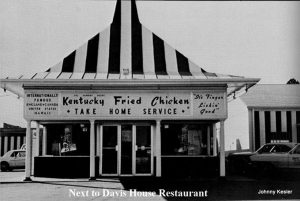 Americus, Ga. – Heart disease is the leading cause of death for men and women in the United States. With... read more