Americus-Sumter senior guard Traevon Brown hit some clutch free throws down the stretch to help the Panthers defeat Blessed Trinity in overtime by the score of 62-59 in the second round of the GHSA Class AAAA State Playoffs. ATR Archive

AMERICUS – The Americus-Sumter High School boys’ basketball team is headed to the GHSA Elite 8 once again. The Panthers (29-0) came from behind Thursday to defeat Blessed Trinity (18-10) by a score of 62-59 in overtime.

The Titans tallied the first two points in the overtime period, but a tip-in basket by Kanova Willoughby and clutch free throws by JaKontist Gordon, Traevon Brown, and Le’Shanna Ross put the Panthers up for good.

Americus went on a on a 10-2 run to start the game and held a nine-point lead at the end of the first quarter, but Blessed Trinity (BT) found its rhythm in the second, going on a 14-0 run to start the period. A three-pointer by Gordon with two minutes left in the half broke the scoreless drought, but Americus went to the locker room trailing by a score of 27-22. 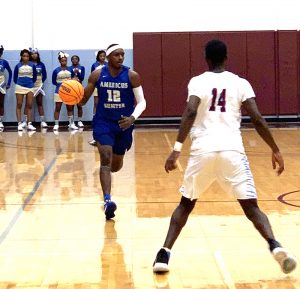 Americus-Sumter senior guard JaKontist Gordon (12) is seen here in a previous game this season. Gordon hit a three-pointer and knocked down some clutch free throws to help Americus-Sumter move on to the Elite 8 (state quarterfinals) of the GHSA Class AAAA State Playoffs.
ATR Archive

The Panthers cut the Titans’ lead to one point on three different occasions in the third quarter, but a barrage of three-point shots by the Titans matched the Panthers’ production, leading to a 42-36 BT advantage heading to the fourth.

ASHS finally tied the game back up late in regulation on an alley-oop dunk by Quevoluia Willoughby off a pass from Brown, and the lead exchanged hands multiple times in the final few minutes. Tied 55-55 with five seconds left in regulation, ASHS had the chance to win the game but a Wallace Bradley floater clanged off the rim just before the buzzer sounded to end regulation.

Americus clinched the victory in the four-minute overtime frame, outscoring the Titans by a 7-4 margin.

The Panthers will face St. Pius X (23-7) in Atlanta next week in the third round of the GHSA State Playoffs. The Golden Lions defeated West Laurens 66-57 on Thursday. Game time and date has not been announced.