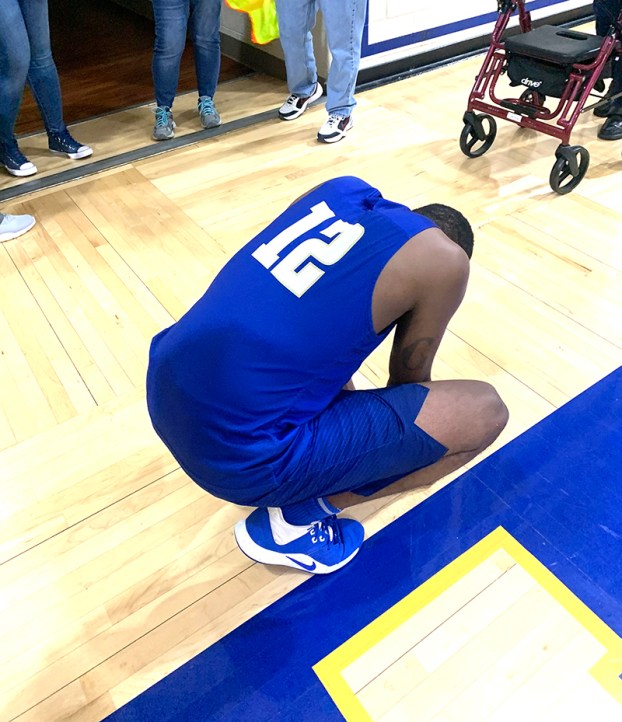 Americus-Sumter senior guard JaKontitst Gordon is dejected after the Panthers lost to St. Pius X 73-70 in double overtime in the quarterfinals of the GHSA Class AAAA State Playoffs. Photo by Ken Gustafson

ATLANTA – It was around this time last year when the Americus-Sumter (ASHS) Panthers invaded the Golden Lions’ den at St. Pius X Catholic High School (SPX) and toppled the Golden Lions 63-46 on their way to the state finals. Almost a year later, the undefeated Americus-Sumter boys’ basketball team came back to SPX with the hope and expectation of duplicating last year’s victory. However, this year’s outcome would be much different. For the first time this season, ASHS found itself on the wrong end of the scoreboard. In a thrilling, double-overtime classic on Tuesday, February 25, the Panthers fell to SPX 73-70 in front of a raucous, standing-room-only crowd at the Mark Kelly Gymnasium on the SPX campus.

For the Panthers (29-1), it was their first loss of the season, but sadly, it was also their last as they were eliminated in the “Elite 8” of the GHSA Class AAAA State Playoffs.

ASHS was nearly eliminated in regulation, but senior guard JaKontist Gordon, who nailed three three-pointers in the contest, hit the most important one with 15 seconds left in regulation to send the game into overtime, tied at 53-53.

With 10 seconds left in the first overtime period, the Panthers had a 64-61 lead, but SPX guard Eamonn Kenah knocked down a three-pointer to send the game into another extra session. 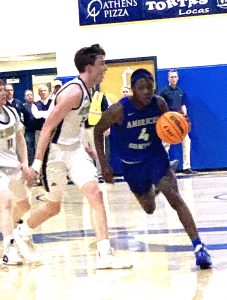 With 2.3 seconds left in the second overtime, the Panthers were trailing 73-70, but junior guard Jordan Wiley was fouled on a three-point attempt, giving him three foul shots and a chance to tie the game and send it into a third overtime. Unfortunately, Wiley missed the first two foul shots and he had to miss the third one on purpose and hope that someone would tip the ball back out so that a final desperation three-point attempt could be made. Incredibly, that’s exactly what happened. On Wiley’s third miss, the ball was tipped back out to Traevon Brown, the team’s best three-point shooter. Brown was able to get a shot off in time, but it was off the mark. The Golden Lions had pulled off the upset and the Panthers’ dreams of a perfect season and a state championship died in Atlanta.

In a game like this, one could point to many different moments that contributed to the outcome, but the one thing that proved to be extremely costly for ASHS in this game was turnovers, especially at key times in the game. Unofficially, the Panthers committed a total of 27 turnovers in the game, compared to 15 for SPX.

“It was a tough game. Both teams went to double overtime. It just didn’t go in our favor,” said Johnny Genwright, ASHS head basketball coach. “We didn’t make free throws right there at the end. We had key turnovers at the end. We gambled and we weren’t disciplined.” In spite of the crushing loss, Genwright is extremely proud of what his team accomplished this year, especially for his nine seniors. “It was a great season. This is a great group of guys. I love them. They play hard,” said Genwright. “It’s bigger than basketball. Now I just want them to go excel, graduate and get into college.” 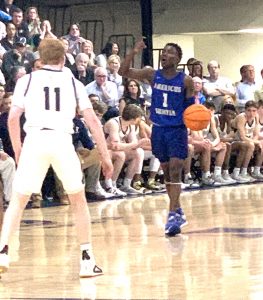 While the 2019-2020 Americus-Sumter boys’ basketball team will not come away with a state championship, no other high school basketball team in Sumter County, boys or girls, has had as good of an overall record (29-1) as this group of Panthers. Even the previous Sumter County area high school teams that won state championships in the past didn’t have as good a record as this year’s Panther squad.

For SPX (23-7), they were led in scoring by Brookes Kahlert with 17 points. Kenah, Daniel Beverly and Devin Portee each chipped in nine points in the winning cause.

The Panthers jumped out to a 5-0 lead, which was capped off by a three-pointer from Traevon Brown. This prompted SPX head coach Aaron Parr to call timeout with 6:28 to go in the first quarter. 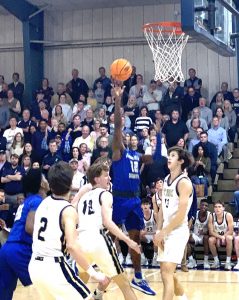 JaKontist Gordon goes up for a basket against St. Pius X. Gordon scored 13 points in the Panthers’ overtime loss.
Photo by Ken Gustafson

Coming out of the timeout, ASHS went on another 5-2 run, which was capped off with a three-pointer from Quevoluia Willoughby. However, from that point until the end of the quarter, the Golden Lions would roar back by going on a 8-2 run to cut the Panthers’ lead to 12-10. Shortly thereafter, SPX took a 13-12 lead on a three-pointer by Eamonn Kenah.

As one would notice by the halftime score, it was a defensive struggle between both teams in the first half. Both teams were able to force each other into committing turnovers. Unofficially, the Panthers turned the ball over nine times in the first half, while SPX committed five turnovers. 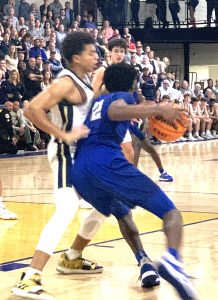 Both teams came out scoring in the early minutes of the third quarter. Bradley was able to knock down two three-pointers for the Panthers, but the Golden Lions responded as Trey Acklin knocked down a three-pointer to keep SPX within three at 31-28. About a minute later, Ross drilled a three-pointer from the corner to give the Panthers a 36-31 lead with a little over three minutes left in the third quarter. Over the next minute or so, both teams traded baskets, but the Panthers would go up 39-34 on another three-pointer by Ross. Bradley extended the lead to four when he was fouled and made one of two free throws with 59.9 seconds left.

Ross hit another three-pointer with just a few seconds left, but Jack Verrill responded with a basket for SPX to cut the ASHS lead to 43-36 by the start of the final quarter.

The fourth quarter began with three-pointers as Kalhert knocked down a shot from behind the arc to bring SPX to within four. However, Ross responded with another three-pointer to puts the Panthers’ lead back up to seven at 46-39.

However, the Panthers simply were not going to shake off the Golden Lions. 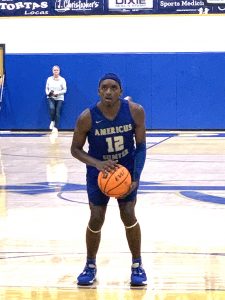 Devin Portee scored shortly thereafter to cut the ASHS lead to 47-45, but JaKontist Gordon responded with a three-pointer to put ASHS back up by five.

After SPX got another basket, timeout was called with 1:54 to go.

It was apparent to all in the building that this “cat fight” was going to end in a thrilling finish.

With 1:49 to go, Daniel Beverly scored on the inside for SPX and was fouled, but couldn’t hit the free throw. However, the Golden Lions got the ball back and Kahlert gave SPX a 51-50 lead on a layup.

On the Panthers’ ensuing possession, they worked the ball around the perimeter to try to find a high-percentage shot, but Brown decided to drive to the basket for a potential three-point play. However, an offensive foul was called against Brown, giving the ball back to SPX. Portee was fouled on the Golden Lions’ next possession and made both free throws, giving SPX a 53-50 lead. The Golden Lions were just 27 seconds away from ending the Panthers’ undefeated season and hopes for a state championship. They would get the ball back and a chance to seal the victory with at least one made free throw by Kahlert. However, Kahlert missed both foul shots, keeping the door opened for ASHS. The Panthers broke right through as Gordon nailed a tying three-pointer with 15 seconds left. The game had overtime written all over it, but the Golden Lions would get one last shot in regulation.

With two seconds left, Kahlert threw an inbounds pass up to Kenah for a game-winning layup, but Quevoluiah Willoughby was there to block Kenah’s shot and send the game into overtime, tied at 53-53.

Both teams traded baskets in the opening minute of overtime, but ASHS had a 57-56 lead. Then with 2:27 left, Kahlert committed his fifth personal foul, putting SPX at a disadvantage. The Panthers responded as Gordon knocked down another three-pointer to put ASHS up 60-56. Portee was able to bring the Golden Lions to within five with one made free throw, but Bradley responded for ASHS with a basket with 1:32 left to put the Panthers up 62-57.

However, the Golden Lions would get baskets from Beverly and Portee to bring them within one point, but Bradley responded with two foul shots at the other end to put ASHS back up by three at 64-61. This was a state playoff game, however, and the Golden Lions would not back down. Kenah nailed a tying three-pointer with 10 seconds left to send this classic state quarterfinal game into a second overtime, tied at 64-64.

Shortly thereafter, Wiley hit a tying layup to tie the game, but Acklin scored on a layup and was fouled. Acklin made the free throw to give SPX a 73-70 lead, but the Panthers would have another shot to tie the game on a three-pointer and send it to its second overtime. With 2.3 seconds left, Wiley was fouled while trying to shoot a three-pointer. He would get three free throws to tie the game. However, Wiley missed the first two foul shots and had to miss the third one on purpose and hope the ball would be tipped back to a teammate for a desperation three-point attempt at the horn. On the third miss, the ball was tipped back to Brown, but his three-point attempt was off the mark and the Golden Lions escaped with the 73-70 win in double overtime.

SPX (23-7) will advance to the Class AAAA Final Four to take on Cross Creek at Fort Valley State University on Friday, February 28.