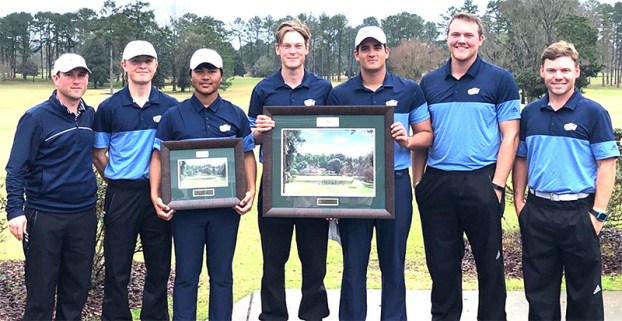 ALBANY – The top-ranked Georgia Southwestern men’s golf team carded a 31-under par overall team score to take home the first place team trophy after carding a Round 3 score of 278 for a total score of 833 at the Hurricane Invitational. The Hurricanes shot tournament lows throughout all three rounds at the Par 72, 7,024 Doublegate Country Club course in Albany, GA.

After finishing day one tied for first place, Vincent Norrman shot a three-under 69 for a 205 (-11) final score as he slipped into second place. Saksit Jairak moved up the leader board in Round 3 as he carded a round low 66, going six-under the final day for a 208 (-8) final score to sit tied in third place. Simon Estrada finished tied for fifth place with a seven-under, 209 final score, followed by Chase McLain, who sits tied for ninth place after shooting one-under today for a 211 (-5) final card. Cole Madison finished tied for 49th place with an eight-over 224 total score, while Elias Birkeland, who participated as an individual, finished with a total score of 217 (+1) to sit tied for 28th place.

Sitting 10 strokes out was Peach Belt Conference foe Clayton State, who shot a Round 3 score of 282 to take home second place with an 843 total score. No. 15 Delta State finished in third place with an 845 (-19) total score, North Greenville stood in fourth place, while No. 23 Carson Newman took home fifth place with total scores of 858 (-6) and 860 (-4), respectively.

Zach Zediker of Delta State was the individual winner as he shot five-under 67 for a 203 (-13) final score. Clayton State’s Augusto Oliva finished third while teammate Joseph Kim finished tied for fifth with scores of 208 (-8) and 209 (-7), respectively, to round out the top five individuals competing.

The Hurricanes will take a week off and return back to the green on Sunday and Monday, March 8-9, as they will compete in the Southeastern Collegiate played at the Kinderlou Forest Golf Club hosted by Valdosta State.