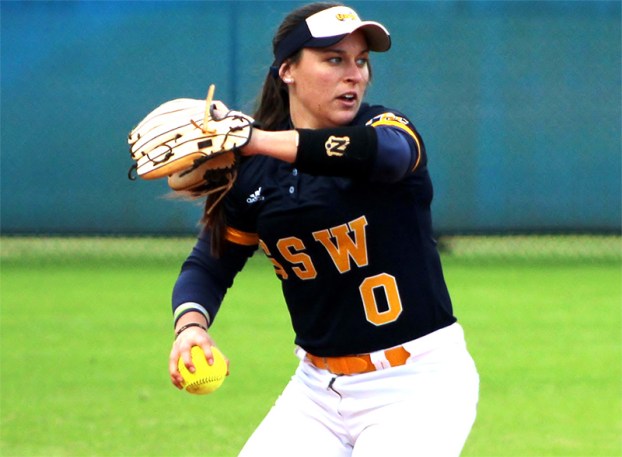 GSW sophomore infielder Katelyn Wood went a combined 4 for 8 at the plate during the Lady Hurricanes’ sweep of a doubleheader at Fort Valley State. Photo by Chris Lind

FORT VALLEY, GA – The Georgia Southwestern State University softball team (13-5), increased its winning streak to six games when they swept Fort Valley State in a double header by the scores of 11-0 and 13-0 on Saturday, February 29, at Wildcat Field on the FVSU campus.

Katelyn Wood led the Lady Hurricanes by going 4-for-8 on the day with five RBIS, a pair of doubles and a home run. Mackenzy McFarland pushed one deep into left field, which was ruled an inside-the-park home run during Game 1.

In the first game of the doubleheader, an RBI bunt single by Allyson Murdock n the top of the second got things started for GSW. With one out, Chloe Zoeller singled to left center field to drive in a run, followed by Jacie Johns, who grounded out but picked up an RBI when Murdock scored. With two on base, Wood sent a bomb over the center field wall to push the score 5-0.

McFarland began the top of the third inning with an inside-the-park home run that was sent into left field. After an error by the Wildcats, Murdock was able to score again to push the score 7-0. In the top of the fifth, Zoeller and Johns both doubled down the left field line as Zoeller picked up one RBI, while Johns picked up two. A single by Wood plated Johns as GSW led 11-0.

GSW starting pitcher Shannon Gibson picked up her sixth win this season. Gibson pitched five innings and gave up one hit, while striking out four Wildcats. Both Woods and Johns finished with three RBIs.

In Game 2, Zoeller and Johns both singled to begin the game for the Lady Hurricanes. Wood followed that up with a double into the right center and picked up two RBIs in the top of the first. Aimee Oglesby followed suit with a double of her own to plate Wood, followed by Lauren Kuerzi, who singled in an RBI to give GSW a 4-0 lead. McFarland then drove in another run on an RBI single to give the Lady Hurricanes a 5-0 lead.

In the top of the fourth inning, a sacrifice RBI bunt by Kuerzi plated McFarland, followed by a two RBI double by Murdock. One of four FVSU errors plated Murdock as an RBI single by Johns closed the fourth inning and the game for GSW.

Jennifer Jernigan was dominant in the circle for GSW in Game 2. Jernigan struck out 11 batters, while only giving up one hit for her fifth win this season. Kuerzi was a perfect 2-for-2 with two RBIs and one run as three other Lady Hurricanes finished with multi-hit games.

The Lady Hurricanes will play at Valdosta State in a midweek doubleheader on Thursday, March 5. The first pitch of Game 1 is scheduled to be at 3 p.m.