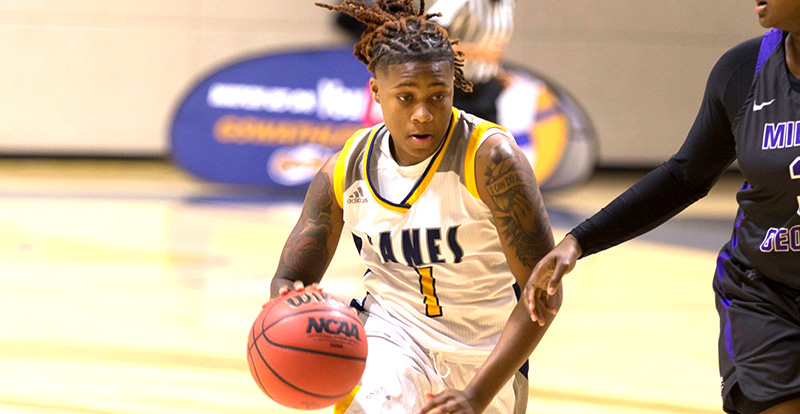 PEMBROKE, NC – The Georgia Southwestern State University women’s basketball team picked up a huge 73-64 win against UNC Pembroke to extend their winning streak to five games as the Lady Hurricanes ruined the Braves’ senior night on Sunday afternoon, March 1, to end the season.

The Lady Hurricanes drained 10 three pointers on the day. Lex Chatman led the team with four shots from beyond the arc, while Jamesha Samuel knocked down three.

GSW ended their season on a five game Peach Belt Conference (PBC) winning streak, the first in the program’s history.

Seconds into the opening quarter, Yasmin Perez drained a three pointer to put the Lady Hurricanes up 3-0, but the Braves quickly responded with a layup. Back-to-back possessions by UNCP gave them a 6-5 lead with 7:46 remaining in the first quarter. Then Melanie Horne extended the Braves’ lead with a three-pointer midway through the quarter. However, Perez drained her second three pointer of the night to cut the lead down. Madison Johnson drained one from inside the post to give GSW the lead back, but UNCP eventually took an 18-16 lead going into the second quarter.

Chatman opened the second quarter with one of her four three pointers to give GSW the lead back, followed by a layup by Johnson as GSW was edging to get ahead. After three scoreless minutes, Johnson drained one from deep that led to a Braves timeout. Coming out the timeout, GSW went on a 12-2 run sparked by two three pointers from Samuel as the Lady Hurricanes took a 36-26 halftime lead.

To start off the third, Chatman extended the lead to 13 points with another three pointer as GSW took over and started to control the game by keeping a double-digit lead. Midway through the third, the Braves were able to cut the Lady Hurricanes’ lead down to 43-35, but a quick layup by Mariya Trimble helped extend it. With one minute remaining in the third, Chatman drained back-to-back three pointers as GSW led 59-44 going into the fourth.

Aliyah Farmer led the Braves with 16 points and 11 rebounds, followed by Shaniya Lester, who finished with 15 points and a team-high three assist.