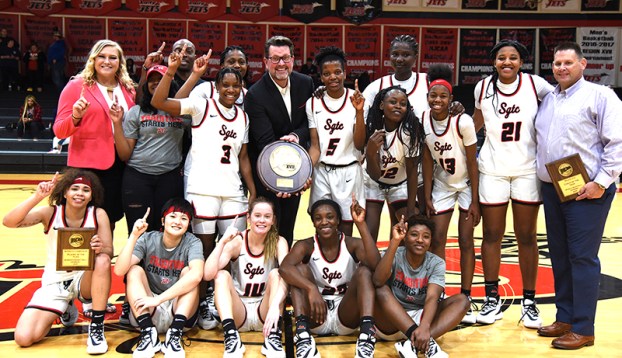 AMERICUS – The nationally ranked South Georgia Technical College Women’s Basketball Team defeated Brandon Harrell and the Georgia Highlands Lady Chargers 69 – 63 in the National Junior College Athletic Association (NJCAA) Region XVII Tournament finals on Saturday, February 29, to capture their fourth consecutive NJCAA Region XVII title. That win gives the Lady Jets the opportunity to travel to Spartanburg, SC to take on Spartanburg Methodist College in the NJCAA District J game on Saturday, March 6, at 1 p.m. Should the Lady Jets win that game, they will be headed to the NJCAA National Tournament in Lubbock, TX for the fourth consecutive year and the sixth in seven years.

For the second time this season in match-ups with Georgia Highlands (GHC), the Lady Jets got behind by 22 points before staging a comeback and capturing the win. GHC was ahead 41 – 19 in the second quarter and went into the half enjoying a 47 – 29 lead. 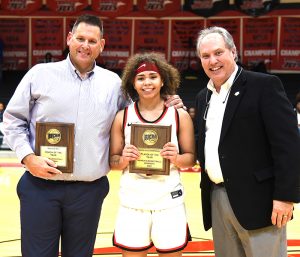 However, SGTC overcame that 22-point deficit with a 28-point swing in a little over 20-minutes to remain unbeaten against conference opponents for the second straight season. The Lady Jets were 18 – 0 in 2018 – 2019 and 20 – 0 following the NJCAA Region XVII tournament. This year, the Lady Jets went 17 – 0 in the regular season conference schedule and added two more wins to move to 19 – 0 this season against conference opponents.

The Lady Chargers and Lady Jets have met four times in the NJCAA Region XVII tournament finals over the last seven years, with SGTC winning three of those contests. GHC was the victor in 2015 – 2016 when they snatched a last second 65 – 63 win away from the Lady Jets.

“I am so proud of these young ladies,” said SGTC head coach James Frey after his team took the win over Georgia Highlands. “Our sophomores have not lost a conference game during their entire time at South Georgia Technical College and that is milestone. I am so proud of them for not giving up and for battling back against Georgia Highlands. I was not happy we got down by 22, but it says something about a team that doesn’t give up. They just refused to lose and I like that.” 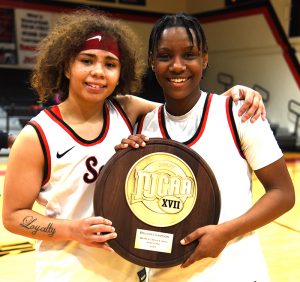 Coach Frey added that this is what his team has worked for over the past seven months. “We had a goal to win the GCAA regular season conference title, host this tournament, win this tournament, advance to the NJCAA District J playoff game and head back to the National Tournament,” said Frey. “We have one more game between us and returning to the National Tournament in Lubbock, TX for the fourth year in a row.”

As the NJCAA Region XVII District winners, the Lady Jets will travel to Spartanburg, SC to face Spartanburg Methodist, the winners from the NJCAA Region X, at 1 p.m. on Saturday, March 6. SMC was the top ranked team in Region 10 and they defeated Caldwell Tech 103 – 64 in their tournament. SMC finished the regular season with a 20 – 7 record.

SGTC hosted SMC in the District J championship game last season and was able to post an impressive 100 – 51 win and advance to the National Tournament. The two teams met earlier this season in the SGTC Thanksgiving Classic and the Lady Jets managed to take a 77 – 57 win in that game.

“We have to continue to play hard each and every game. We are at the point in the season where you win or you go home,” said Frey.  “Spartanburg Methodist has been working all season just like we have and the team that executes Saturday is the team that advances to the National Tournament. We want to be that team.”

The scoring in the Region XVII championship game was pretty evenly spread out for the Lady Jets. Four sophomores and starting freshman center Femme Sikuzani were all in double-figures. Sophomore forward Yasriyyah Wazeerud-Din led the team in scoring with a total of 14 points, 11 of which came in the second half. She was followed by sophomore guard and GCAA Player of the year Shamari Tyson, sophomore guard Niya Goudelock and freshman center Femme Sikuzani, who each had 12 points. The only other Lady Jet in double figures was sophomore Anna McKendree with 10 points.

Tyson made three of four free throws in the last 10 seconds to clinch the win for the Lady Jets. Niya Goudelock made two points with 1:31 left in the game to put the Lady Jets up 66 – 63. The last three points by Tyson allowed the Lady Jets to take 69 – 63 victory.

The Lady Jets held Georgia Highlands to only 16 points in the second half after allowing them to outscore them 47 – 29 in the first half. Freshman Veronica Charles had five points and they all came late in the second half to allow the Lady Jets to go into the half down by 18 points. The only other Lady Jet to score was Oumy Gueye and she had a total of four points on the night.

GCAA Commissioner David Elder presented the South Georgia Technical College Lady Jets with the NJCAA Region XVII tournament trophy and Georgia Highlands with the runner-up trophy. He also presented Lady Jets head coach James Frey with the GCAA Coach of the Year honors. This was the sixth time in eight years that Frey has earned the honor. Elder also presented the GCAA Player of the Year honors to SGTC sophomore guard Shamari Tyson.