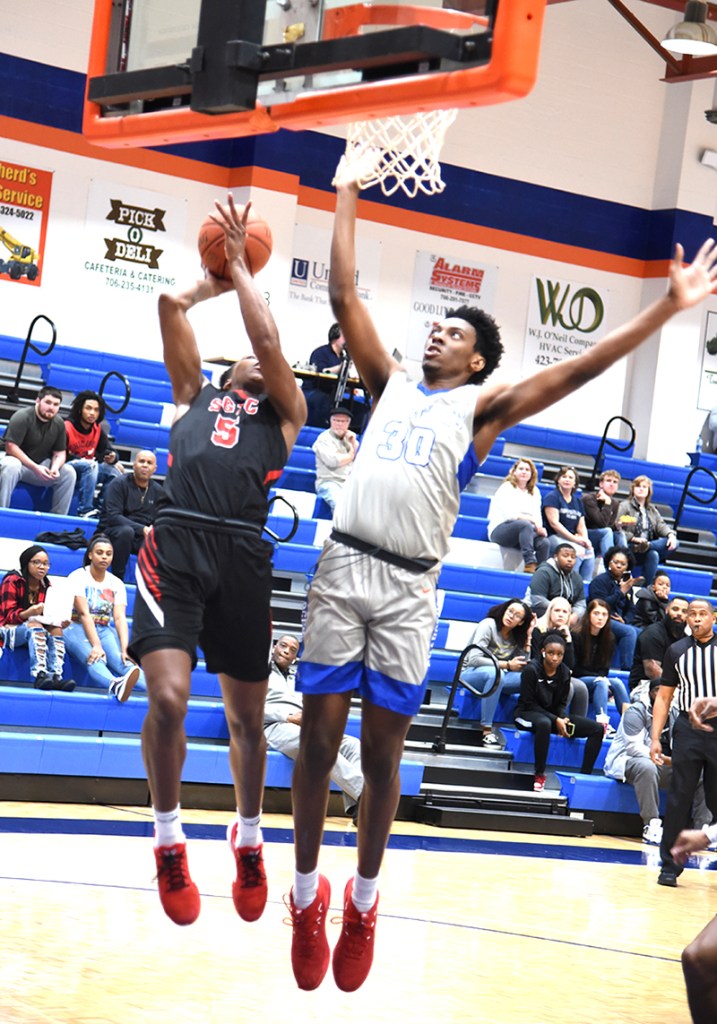 ROME, GA – The seventh seeded South Georgia Technical College men’s basketball team traveled to Rome to see if they could upset the second-ranked Georgia Highlands Chargers (GHC) in the first round of the National Junior College Athletic Association (NJCAA) Region XVII tournament quarterfinals Tuesday, but the Chargers walked away with the 81-69 victory.

It was not the season that the Jets and head coach Travis Garrett had hoped for. SGTC closed out the 2019 – 2020 year with a 13-18 overall record and a 6-10 performance in the conference. As the seventh seed in the tournament, they had to face off against a strong second place GHC team in Rome in the first round.

Coach Garrett and the Jets had high hopes for an upset win over GHC in the NJCAA Region XVII tournament. They had upset Gordon State College three days earlier by the score of 71-61 and had won three of their last four contests. 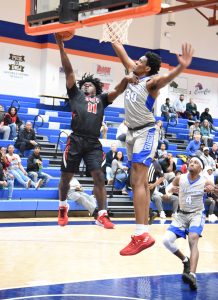 SGTC Sophomore Jaylan McKinney (11) is shown driving in to the basket.
Photo by Su Ann BirdThe Jets scored the first points in the game when sophomore Jaylen McKinney posted a three-pointer, but the lead did not last very long. The two teams battled back and forth throughout the first half with six ties and seven lead changes. The Jets’ largest lead in the first half was four points and the Chargers had stretched their lead to 12 with 1:10 left in the half. The Jets posted up a basket to cut the deficit to 46-36 at the end of the first twenty-minute period.

SGTC came back in the second half and scored first again to pull within eight points. The Jets scored again to cut the gap to six points at 46-40 with 18:23 left to play. However, that was as close as they could come as GHC ended up with a 19-point lead with 12:42 still on the clock at 60-41.

The Jets battled back to cut the difference to 11 points, but the Chargers never let them back in it and captured the 81-69 win.

Sophomore Justin Johnson led the Jets with 19 points on the night. He and Lamont Sanders were the only two SGTC players in double-digits. Sanders had 12 points. Sophomore Toriano Lewis scored nine points, Jaylan McKinney had eight and Merdy Bata added five.

Trevin Wade and Caheim Brown led GHC in scoring with 21 and 20 points respectively.

The loss concluded Garrett’s fifth season as the men’s head basketball coach at SGTC. His overall conference record is 38-42 and 75-80 overall. His teams have finished as high as third in the regular season conference play. Garrett also has a fourth place finish and three seven place finishes. The Jets have advanced to the NJCAA Region XVII Tournament finals twice in five years and lost in the quarterfinal round the other three seasons.