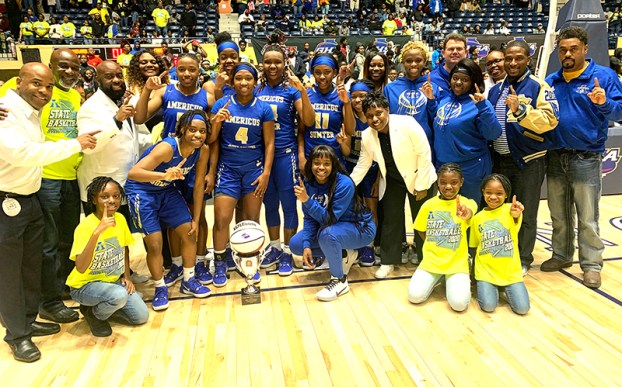 A victory parade to honor the Americus-Sumter Lady Panthers basketball team will be held in downtown Americus on Monday, March 16, at 7 p.m. This will be followed by a community celebration at the Americus-Sumter HS gymnasium. At the celebration, the Lady Panthers, along with the 29-1 ASHS boys' varsity team and the three SCPRD All-Star basketball teams, will be honored for their accomplishments this season. ATR Archive

MACON – It has been a long four years, but it finally came on Friday afternoon, March 6, at the Macon Centerplex. The Americus-Sumter Lady Panthers (29-2) took control of the game from the second quarter on out and defeated the Troup Tigers (THS) 66-52 to claim the school’s first state championship since the 2015-2016 season.

It was the culmination of all of the hard work the Panthers put in during the off season and during the 2019-2020 season.

“It feels great. It actually feels great,” said ASHS head basketball coach Sherry Harris. “I thought we carried out our game plan. The girls stuck with it and stuck with it. We had a lot of unforced turnovers in that first half and thank the Lord, they didn’t come back to haunt us later in the game.”

One huge reason for the Lady Panthers being able to bring home the trophy to Americus and Sumter County was their ability to knock down free throws. 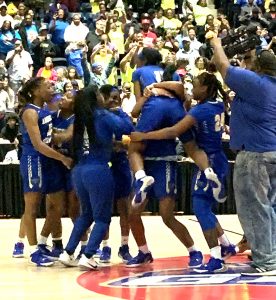 Americus-Sumter senior guard DeAsia Ford in the arms of a teammate as the ASHS girls celebrate their state championship.
Photo by Ken Gustafson

For much of the season and during the state playoffs, the Panthers struggled to hit free throws, but in the state championship game, ASHS made 22 of 29 foul shots (75.9 percent). It was an incredible turnaround from the way they had been shooting foul shots.

“I told the girls ‘Let’s close this thing out. Get up there and knock down your free throws. We’ll go home as state champs’,” said Harris.

Trinity Jones led all scorers with 21 points and Jelissa Reese poured in 19. 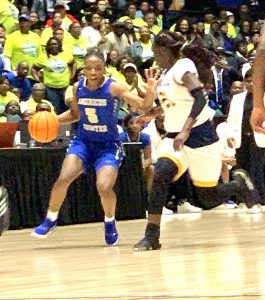 Reese, who has signed a scholarship to play at the University of Troy, came up big on the big stage when she had to. “She’s going to be a great one,” said Harris. “She’s an honor grad and an outstanding student, as well as an athlete. She played big tonight.

For Jones, winning the state championship was the sweet reward for all of the hard work that she and her teammates have put in to get to this point. “It feels amazing. WE worked hard for this all season and we got it,” Jones said. “As the game continued, our intensity stepped up and we just kept pushing,” Jones said. “Our coach told us not to let up and we did it.” 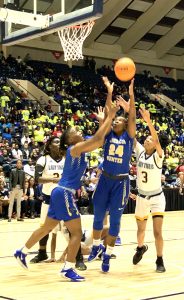 Americus-Sumter senior forward Brianna Pope goes up for a rebound in the state championship game against Troup.
Photo by Ken Gustafson

Both DeAsia Ford and Brianna Pope each had seven points for the Panthers and both Trinity Jackson and Tiffani Goodman each scored six to round out the ASHS scoring.

The Panthers were able to amass a 12-point lead in the third quarter and were able to have the composure to maintain the lead for the rest of the game. “All of that comes from doing our pre-season conditioning,” said Harris. “Every day, I make tem run more. We’re doing tires. We’re doing conditioning, running hills, we always try to get one more. I told them at the beginning of the fourth quarter: ‘You’ve got eight minutes to play. All I need is one more, just one more’. They (THS) were missing a lot of shots and we got out and ran and we got a lot of easy baskets.”

For Harris, this is her second state championship as the ASHS girls’ head coach. While winning it for a second time is no less sweet for her, this year’s team was a different team than the one who won it back in 2016.

“They’re all different. That one (2016) is totally different than this one mainly because of the personnel,” said Harris. “I probably have better athletes on this team overall, but that team (2016), they had that “Don’t quit. You’re not going to beat me” attitude. This team right here (2020), we have a lot better athletes on the team, but they learned how to become a team throughout the season.” 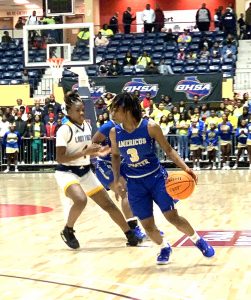 ASHS sophomore guard Tiffani Goodman tries to get by a Troup defender. Goodman scored six points, grabbed 10 rebounds and dished out two assists in the win over Troup.
Photo by Ken Gustafson

ASHS didn’t make the state tournament last year, making this year’s accomplishment even sweeter. “Anytime you have a season like that, it usually makes you bigger and stronger,” said Harris. “I had to become a better coach. I had to make some adjustments and it always comes down to discipline.”

The Panthers won the tip to start the game and Reese was able to score the game’s first basket off the opening tip. ASHS went up 5-2 early in the first quarter, but the Tigers went on a 5-2 run to tie the score at 7-7.

Both teams traded baskets over their next possessions, but the Panthers took a 13-9 lead when Jackson scored and was fouled. However, she could not complete the three-point play and the score remained 13-9. The Panthers finished out the first quarter with four unanswered points to take a 17-9 lead by the quarter’s end. 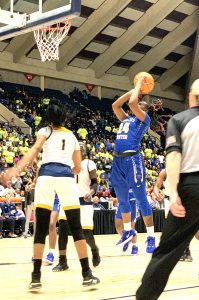 While the Panthers made some plays on defense, they turned the ball over numerous times in the first quarter and that continued early in the second. Fortunately, they were able to force the Tigers into committing turnovers as well.

THS got two free throws from Amber Gilbert, but Jones responded with a three-pointer to put ASHS up 21-11 early in the second quarter. While the ASHS offense was heating up, the Panthers continued to play solid defense through the first few minutes of the second quarter.

With 5:15 to go before halftime, Jones was able to knock down two free throws to give ASHS a 25-14 lead. Then Reese got a steal and scored on a breakaway layup. The Panthers were dominating as they led 27-14. During this part of the game, the Tigers were struggling in their half-court offense and much of that was due to the intense defensive pressure of ASHS. 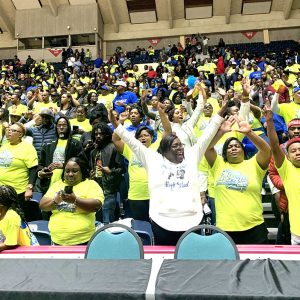 Several hundred Americus-Sumter fans made the trip up to Macon to see their Lady Panthers win the state championship.
Photo by Ken Gustafson

With less than three minutes before halftime, Reese continued to heat up as she hit a fade-away jumper to put the Panthers up 29-16, but THS struck back as Palmer nailed a three-pointer to cut the ASHS lead to 29-19. Then with 1:56 to go, Goodman sank two foul shots to put ASHS up 31-19.

The Tigers continued to struggle on offense, but ASHS committed a turnover with about a minute left, which resulted in a basket for Gilbert. Alexia Murphy would later score on a fast-break basket to cut the ASHS lead to 31-23 at the half.

Reese scored 13 of her 19 points in the first half to lead the Panthers, while Palmer led the Tigers with seven first-half points.

The one facet of the game that the Panthers had been struggling with all season with, foul shooting, was not a struggle for them in the first half. ASHS made 10-15 foul shots (66.7 percent) during the first 16 minutes of play.

As they have done all season, the Panthers forced 12 turnovers in the first half, though they themselves committed 18. ASHS also used its inside game to generate points. The Panthers outscored the Tigers 16-4 in the paint during the first half.

Overall, the Panthers controlled the first half of play and were only 16 minutes away from claiming a state title.

Ford got things going for ASHS early in the third quarter by hitting a jumper at the top of the key, but the Tigers struck back as Gilbert scored on a layup. Gilbert struck again a minute later with a three-pointer to pull THS to within six at 34-28.

Over the next few seconds, both teams traded baskets, but the Panthers had a 37-30 lead before timeout was called with 4:28 left in the third quarter. 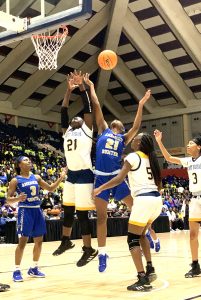 Out of the timeout, Ford nailed another jumper to give the Panthers a 39-31 lead. Both teams traded baskets over the next minute, but Goodman drove baseline and scored on a layup for ASHS. On the Panthers’ next possession, Jones was able to score to increase the Panthers’ lead to 46-34. This electrified the huge contingent of ASHS fans as timeout was called with 1:47 left in the third quarter. The Tigers were able to make a short 4-0 run to end the quarter, but ASHS still led 46-38 to start the final stanza.

The Panthers jumped out to a 49-38 lead on a three-pointer by Jones early in the fourth quarter, but Gilbert responded with a basket to keep the Tigers close.

With 5:45 to go, the Panthers decided to be patient on offense, milk the clock, and get a good shot. However, they came up empty and Palmer scored at the other end to cut the ASHS lead to 49-42. 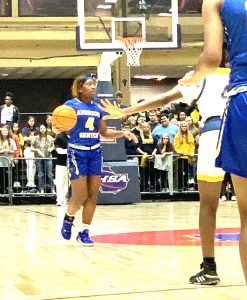 Americus-Sumter senior guard Trinity Jones (4) led the Lady Panthers in scoring with 21 points on 6 of 16 shooting. Jones also made 7 of 8 free throws.
Photo by Ken Gustafson

Reese responded with a driving layup and Jones would later sink two foul shots to put the Panthers up 53-42. That sequence of events electrified the ASHS crowd as timeout was called with 3:50 left to play.

Out of the timeout, Pope, who had been fouled, made two free throws, but THS would not go away as Gilbert nailed a three-pointer to bring the Tigers to within 10 at 57-47.

On their next possession, the Panthers tried to run their half-court offense. Reese was fouled with 2:29 to go and made both free throws. That would be the beginning of the end for THS as the Panthers were able to outscore the Tigers 9-5 and close out the game with the victory.

As they had done all season, the Panthers used their intense defensive pressure to stifle the THS offense throughout the game and especially in the second half.

Harris praised the defensive play of Goodman throughout the game, in particular, Goodman’s ability to control the THS point guard. “Number 23 (Gilbert), I thought she was outstanding and I think the fatigue of her having to bring the ball up and down the court made her miss a lot of those shots later in the basketball game,” said Harris.

THS finishes the season with an overall record of 27-2. The Tigers were led in scoring by Gilbert with 15 points. Palmer was also in double figures with 13 points.

Stay tuned to the Americus Times-Recorder for information about the upcoming parade to celebrate the state champion Americus-Sumter girls’ basketball team.

From Staff Reports   AMERICUS – The Americus chapter of the Knights of Columbus will hold its 23rd annual Charity... read more