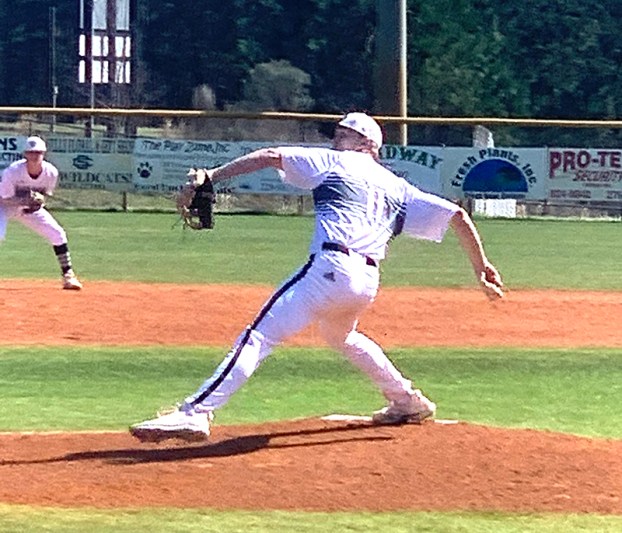 ELLAVILLE – Schley County (SC) starting pitcher Dylan Taylor pitched five scoreless innings and Luke Pawlowski went 3 for 3 at the plate with four RBIs and a run scored to lead the Wildcats to a 10-0 shutout of Marion County on Saturday afternoon, March 7, at Schley County High School.

With the win, the Wildcats stay undefeated at 3-0 on the season and handed the Eagles (8-1) their first loss of the season.

Due to the amount of rain in the area over the past week, the Wildcats have been unable to practice or play games, which meant that the players had to spend a lot of time in the batting cages. As far as SC head coach Chuck Cheek was concerned, it was a welcomed relief that the team could hit finally take the field on a sunny afternoon.

“That’s been the biggest thing. We haven’t had games. We haven’t had practice time,” said Cheek. “Our guys are so sick and tied of hitting in the cage. You know, we’ve done about all we can do in there and we just need to be on the field. This is the prettiest day we’ve had. This is the driest the field has been in a long time. We went a week without taking ground balls just because it has been so wet. I really feel like we are going to be a pretty good team by the end of the season. We just need to play.” 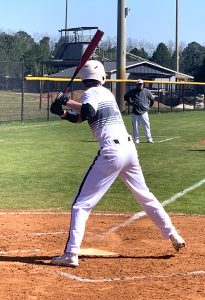 Schley County DH Luke Pawloski went 3 for 3 with a run scored and four RBIs to help lead the Schley County Wildcats to a 10-0 victory over Marion County.
Photo by Ken Gustafson

The Wildcats jumped out to a 3-0 lead in the bottom of the second inning as they scored three runs on three hits and took advantage of a couple of errors committed by the Eagles. Trypp Lumpkin led off the inning with a single. After Tucker Welch flew out for the first out, Athon Hines drew a walk off MC starting pitcher Austin Duffey. Ridge James, who entered the game as a courtesy runner for the Wildcats, advanced all the way to third base on a passed ball. Luke Renfroe then bunted into a fielder’s choice, scoring James for SC’s first run. Pawlowski then drove in two runs on a single, but was thrown out while trying to advance to second. Logan Wurtz followed that up by reaching on an error by the MC second baseman. After Trent Bivins drew a walk to load the bases, Taylor struck out to end the inning, but the Wildcats were up 3-0.

SC’s big inning came in the bottom of the third. The Wildcats scored five runs on five hits to take an 8-0 lead. Lumpkin tripled to start the inning and Welch drove in a run on an RBI single. After Welch stole second base, Hines drew a walk and Welch was able to steal third base. Then Renfroe laid down a sacrifice bunt, which allowed Welch to score. Pawlowski then doubled to left field, scoring Hines to give the Wildcats a 6-0 lead. 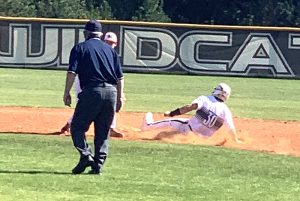 SC added two more runs in the bottom of the fourth inning to salt away their 10-0 victory. With runners at first and third with two outs, Pawlowski singled to center field, driving in Welch to make the score 9-0 Wildcats. SC got its final run of the game when Wurtz hit a fly ball and reached on an error by the MC left fielder. That allowed Renfroe to score and it completed SC’s run production.

In the top of the fifth, Taylor was able to retire the side in order to end the game.

Taylor pitched all five innings for the Wildcats. He gave up no runs on two hits, walked none and struck out three batters 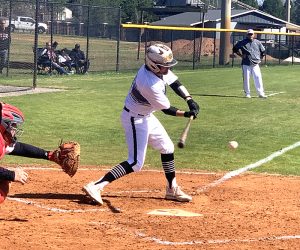 SC second baseman Logan Wurtz went 1 for 3 at the plate with a single, a run scored and one RBI in the Wildcats’ victory.
Photo by Ken Gustafson

In addition to Pawloski’s offensive production, Lumpkin also had a solid day at the plate by going 2 for 2 with a triple and a single.

While he felt his club didn’t hit the ball as well as he would have liked them to, Coach Cheek was pleased with his team’s overall effort and performance.

“We got a guy to third base and Renfroe gets down the sacrifice squeeze. He did a great job with that. We were able to score a run. Then Pawlowski comes in with a hit and drives in two. That gave us a little lead,” said Cheek. “Dylan was great on the mound. He attacked the zone…threw a ton of strikes. They didn’t square up any balls against him. He went five innings and was at 50 some-odd pitches and was very efficient. Our defense played great today and made some really good plays. We didn’t hit the ball as well as I would like to see. We’ve actually hit it better. We’re capable of hitting it a lot better than that, but we did a really good job of executing when we had guys in scoring position.” Cheek went on to say that his guys were able to lay down bunts, move runners over and get guys home from third base. 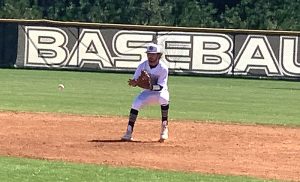 SC second baseman Logan Wurtz is about to field a ground ball.
Photo by Ken Gustafson

Domonic Briggs and Luke Ogan were the only two MC players to get hits off Taylor.

The Wildcats will now turn their attention to their game at Crisp County on Monday, March 9. The first pitch from Cordele is scheduled for 6 p.m.

MACON – It has been a long four years, but it finally came on Friday afternoon, March 6, at the... read more