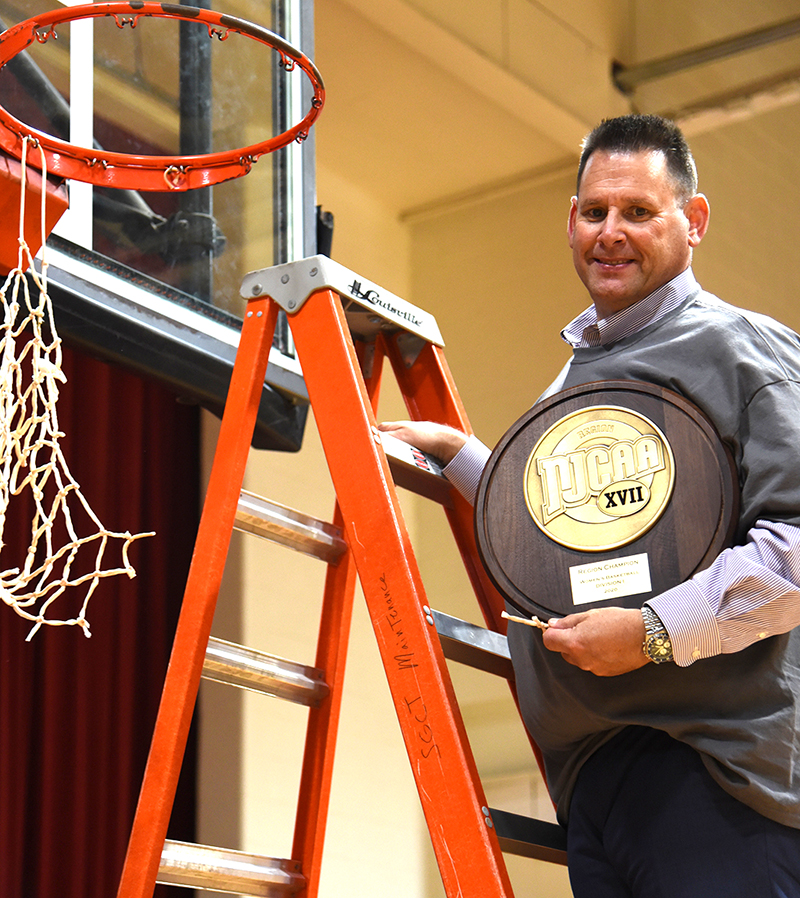 SGTC Women’s Head Basketball Coach James Frey cuts down the net after his Lady Jets defeated Spartanburg Methodist College and clinched their fourth consecutive berth in the NJCAA Division 1 Women’s National Tournament. The tournament is tentatively postponed until April 20 due to concerns over the COVID 19 Corona Virus. Photo by Su Ann Bird

AMERICUS – South Georgia Technical College Athletic Director and Lady Jets head coach James Frey learned on Thursday, March 12, that he was one of four finalists for the 2020 NJCAA Division I World Exposure Women’s Basketball College Coach of the Year. He also learned Thursday that the NJCAA Division I Women’s Basketball Tournament has been postponed due to the current climate of the COVID-19 situation.

It was a little ironic that Coach Frey received both bits of news on the same day.  “I appreciate World Exposure Women’s Basketball for naming me a finalist for National Coach of the Year. They have a fantastic service run by a college coach, so to have a peer think highly of the work you put in is humbling,” said Frey.  “I know the other finalists very well. They are friends of mine and all very deserving of the honor. It is pretty cool to be mentioned along with quality people like them.”

Frey was nominated along with Bart Walker from Northwest Florida State, Chad Gibney of Western Nebraska and Cayla Petree of South Plains as the four finalists in the World Exposure’s Women’s Coach of the Year nominations. All four teams were set to tip off in the NJCAA Tournament next week and the winner was scheduled to be announced on Monday, March 16, at the NJCAA National Tournament. 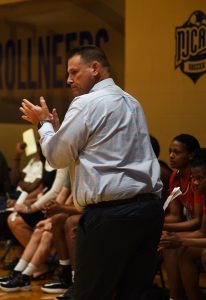 Frey has earned the Georgia Collegiate Athletic Association (GCAA) Coach of the Year honor six times in his eight years as a head coach. His Lady Jets have earned a berth in the NJCAA National Tournament six of the eight years that Frey has been at the helm. His team is currently ranked sixth in the World Exposure Poll and was seeded 11th in the NJCAA National Tournament. This season, the Lady Jets have a 30 – 2 record and are fourth in the nation for three-point percentage shooting (37.1 percent). The Lady Jets are also ranked ninth in the nation for total rebounds per game with 48.8 and third in the nation for steals per game with 16.2.

Cayla Petree of South Plains was another finalist. Petree has guided South Plains to one of the best seasons in program history, earning a number two seed in the NJCAA Women’s Basketball National Tournament with a 32 – 1 record. Petree earned WJCAC Coach of the Year honors for the second straight season and is making her second consecutive trip to the national tournament after advancing to the Elite Eight in 2019. Petree was one of four finalists for the 2017 and 2019 WBCA National Coach of the Year and was the WBCA Coach of the Year in 2020.

Western Nebraska Head Coach Chad Gibney has played one of the top 10 toughest schedules in the country, according to the Massey Ranking. Gibney’s Cougars are ranked sixth in the Massey Rankings based on strength of schedule. They beat Top 20 teams such as Casper, Gillette, Otero, and Utah Valley State College.

Gibney has made four straight national tournament appearances from 2017 to 2020. Gibney was the 2020 South Coach of the Year and has been named the District I Coach of the Year twice (2017 – 2019) and is a two-time Region IX Coach of the Year (2018 – 2019).  Under Gibney’s leadership, the Lady Cougars are 28 – 2 this season and are currently ranked third in the World Exposure Poll.

The fourth finalist is Bart Walker of Northwest Florida State (NFS).  Walker has won over 20 games in four of his five seasons at the helm of the NFS program and has an overall coaching record of 294 – 90.  Walker has earned the NJCAA regional Coach of the Year honor five times and has earned five Elite Eight appearances at the NJCAA National Tournament. NFS has advanced to the Elite Eight in each of the last two seasons under Walker and his team is currently ranked fourth in the World Exposure poll. Currently, NFS has a 27 – 4 record.

Right after Frey learned that he was being included as a finalist in the Coach of Year poll, he learned that the national tournament was being postponed.  “I am disappointed for the team, but I am really glad the NJCAA powers that be saw fit to postpone our tournament and not cancel it,” said Frey. “Our young people have worked extremely hard for the past six months and to not be able to be rewarded for their hard work would be tough on them. At the same time, I appreciate our leaders looking out for the best interest of the players, coaches, spectators and officials who would be taking part in the tournament. And national Dr. Parker has everyone’s best interest at heart and I know this was an incredibly hard decision to make.”

The tentative start date of the NJCAA Division I women’s national tournament is Monday, April 20.  “We will try to take a preseason approach for the next few weeks and keep our young ladies interested and working hard. We will work on fundamentals and execution and then try to get back in game mode in early April.  It is a good opportunity for our young people to get better.”

Frey also thanked the many individuals who had made donations to the SGTC Booster Club to help defray the expenses for the national tournament trip. “Right now it looks like we will still need donations for the national tournament trip. It is just going to be four or five weeks later than we had anticipated. I am grateful to everyone who has supported us all season long and I hope that you will continue to show that support five or six weeks from now,” said Frey.