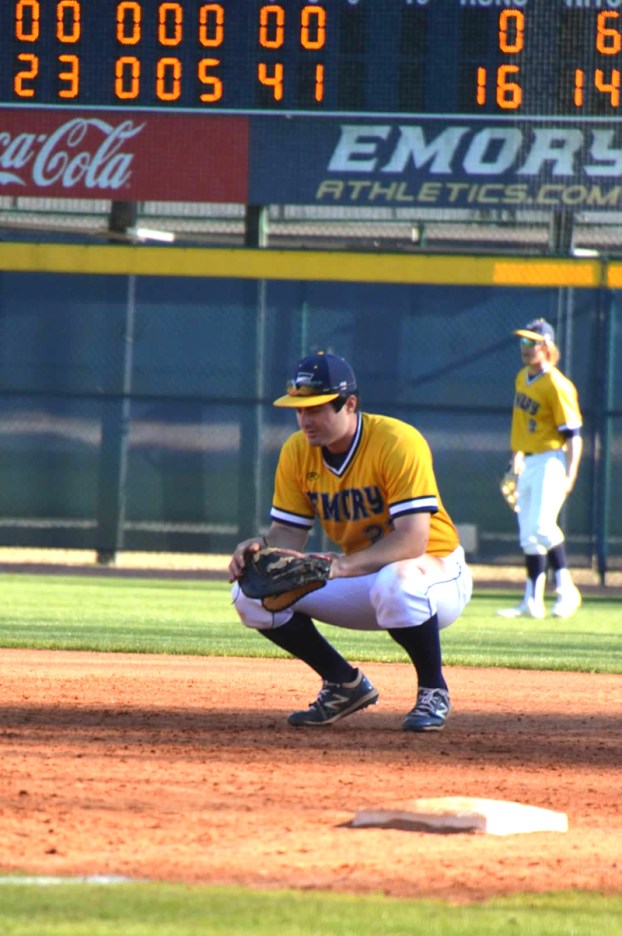 ELLAVILLE – As a result of the Corona Virus, the whole world has been turned upside down and that includes the world of sports. Under normal circumstances, the NCAA Division 1 Men’s Basketball Tournament, more commonly known as “March Madness” would be going on right now, but because of this highly contagious and deadly virus, all intercollegiate sports, including baseball, have been cancelled for the rest of the school year.

The dreams that student-athletes participating in basketball, baseball, lacrosse and track & field of winning a national championship or finishing the year on a positive note have all been shattered. This is especially hard for the seniors, who were hoping at one last shot at helping their teams win a national championship or were at least hoping to finish their careers on a positive note. All colleges and universities, from “big time” NCAA Division 1 schools to NAIA member institutions to the junior colleges, have cancelled all remaining winter and spring sports for the rest of the school year.

One of these senior student-athletes who is having to cope with his career coming to an early and abrupt end is Emory University senior right-handed pitcher / first baseman Michael Leeder. Leeder, the son of Georgia Southwestern State University Athletic Director Mike Leeder, was a standout player at Schley County High School.

He was the starting first baseman for the Wildcats as a junior in 2015, the year they won the GHSA Class A-Public State Championship. During Leeder’s senior year in 2016, the Wildcats lost in the state semifinals.

Leeder decided to play his college baseball at Emory University. Up until the cancellation of his team’s season, Leeder was the starting first baseman for the Eagles and was also a right-handed pitcher. Up until the cancellation of the season two weeks ago, the Eagles had gotten off to a great start. They had an overall record of 11-4 and were 8-3 in the University Athletic Association (UAA).

However, Leeder, along with the rest of his teammates, would eventually be confronted with the fact that their season would be over after just 15 games played.

We at the Americus Times-Recorder would like for the readers to hear straight from Leeder regarding how he and his Emory teammates, especially his fellow seniors, found out that their season was swiftly coming to an end and how they are coping with its. Here is Leeder on how it all came about:

“On Tuesday we woke up like any other game day. It was spring break, and we were coming off a great weekend series, having swept the University of Mary Washington. The day before, we had dropped a tough game to Berry College, but that still left us at 11-3 on the season, and early Tuesday morning, we were ranked 23rd in the nation by D3 Baseball. It was a huge accomplishment, since we had not been ranked in almost two years to the week. My sophomore and junior years we struggled mightily and finished barely above .500, but this year felt different. The team chemistry was there, and we were playing well. Tuesday night we traveled to

take on LaGrange College, another very good team in the South region. I had several friends on the team and was looking forward to the chance to see and play against them for the first time this year. Rumors were swirling about March Madness being played without fans, but nothing had become official yet. As a team, we

were still solely focused on playing our game that night.

The game didn’t go well for us. We came out flat, got down 4-0 quick, then another bad inning allowed LaGrange to blow the game open to 8-0 by the fifth or sixth inning. We weren’t really doing anything well, and LaGrange was making us pay. As the game marched into the seventh, my coach told me that I’d throw the bottom of the eighth. 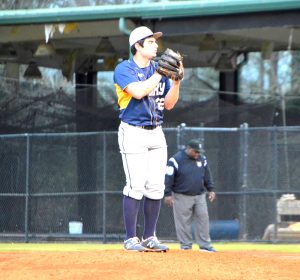 Michael Leeder in action as a right-handed pitcher for Emory University.
Submitted Photo

It felt like a very normal appearance. I threw really well and felt good, which I was excited about, and got two of my buddies out in the inning I was in there. It didn’t overshadow the fact that we got thrashed 8-1, but it helped. I got to see my friends after the game to talk right before we left, and then we were back Atlanta bound.

On the bus we had discovered that Amherst College had cancelled their season and would only be playing three or four games that year. Many schools across the country were announcing that they were moving to online classes.

Our bus ride was dead silent, not only because we lost, but because we were worried about what was coming next. Having another D3 school cancel hit home, and our level of concern for our season was rising.

On Wednesday, we were off from practice. I am working on a thesis as part of my senior year at Emory and had a meeting with him that morning. At the meeting, we talked about the uncertainty surrounding Emory and whether we’d move to online classes as well. We were convinced that the school would act in some nature but

weren’t sure what that would mean to everyone involved, including athletics. As a team, we ate dinner together and the NCAA announced that the basketball tournament would be played without fans. It was the first large domino to fall. We were all very concerned at this point. Later that night, after we got home, the news broke that an NBA player had contracted the virus and the entire league would be suspended indefinitely.

Shortly after, Emory University sent an email out announcing that we would be moving to online classes for the rest of the semester. At this point, many schools were announcing that athletics would be suspended indefinitely. At Emory, we knew that it wouldn’t be long until we followed suit, and the best we hoped for was

that we weren’t completely cancelled. We had a players’ meeting late Wednesday night. It was easily the most emotional couple of hours I have ever been apart of. Many of us were reflecting on what could be our last game ever. I was clinging to the fact that I had gotten one more inning. It didn’t feel like much in an 8-1 game on Tuesday, but 24 hours later, it had a whole different meaning.

Nothing was official yet, so the next day, we had practice at one o’clock. It was easily the worst quality practice we had during my time there. Our coach made sure we had some fun, letting the pitchers hit with us and keeping things as light as possible. Oglethorpe University, located right down the road in Brookhaven, had suspended their baseball season, and we felt like that was a huge domino to fall.

After practice, it was the most excruciating wait. We knew meetings were happening. The worst feeling is knowing that there are people discussing your livelihood behind a closed door. We had a bad feeling about the outcome of those meetings. Before those meetings even concluded, the NCAA announced they had cancelled all winter and spring championships. This included the College World Series in June. We were stunned. It was a sweeping move by the NCAA. Shortly after, we got the email that our season was cancelled, and that we were meeting the next morning.

On Friday, we met officially as a team for the last time this season. It was emotional, but honestly, at that point, everyone was just out of energy. We as seniors said official goodbyes, but obviously we would see our team outside of that meeting as people went their separate ways. It seems like such a low energy ending to the story,

but unfortunately it was reality. Careers were ended and forever altered as simply as that. Never would I have thought that I would be so thankful for a seemingly low leverage inning against LaGrange.

In the coming days, the NCAA announced that they would provide eligibility relief for all spring sports. A blanket waiver allowing everyone to retain their season. This was an interesting move. What I feel was lost most in the turn of events was the sense of closure. If you lose the last game of the season, or don’t make the

tournament, at least you know that you weren’t good enough. When things are prematurely ended, it’s almost haunting to think what could have been. Maybe the 2020 Emory season was destined to be the one where we finally made it back to the College World Series, or maybe those two losses were the start of the ultimate

collapse. We’ll never know, and my guess is that’s what’s going to bother the players and coaches for years to come.

My thoughts are with the seniors who now have to decide whether to put their lives on hold for another year to get a sense of that closure. I hope that you find peace with your careers, whether or not you ever step on another court, field, track or mat. Personally, this is the ending to my athletic story for now. I am attending law school in the fall with the hopes of getting back into athletic administration in the future.”

Hopefully, lessons will be learned from this pandemic so that future student-athletes will not have to experience a monumental and abrupt postponement of their college careers such as this one.

Thursday, March 19, was supposed to be the first day of competition of arguably the most exciting sporting event in... read more