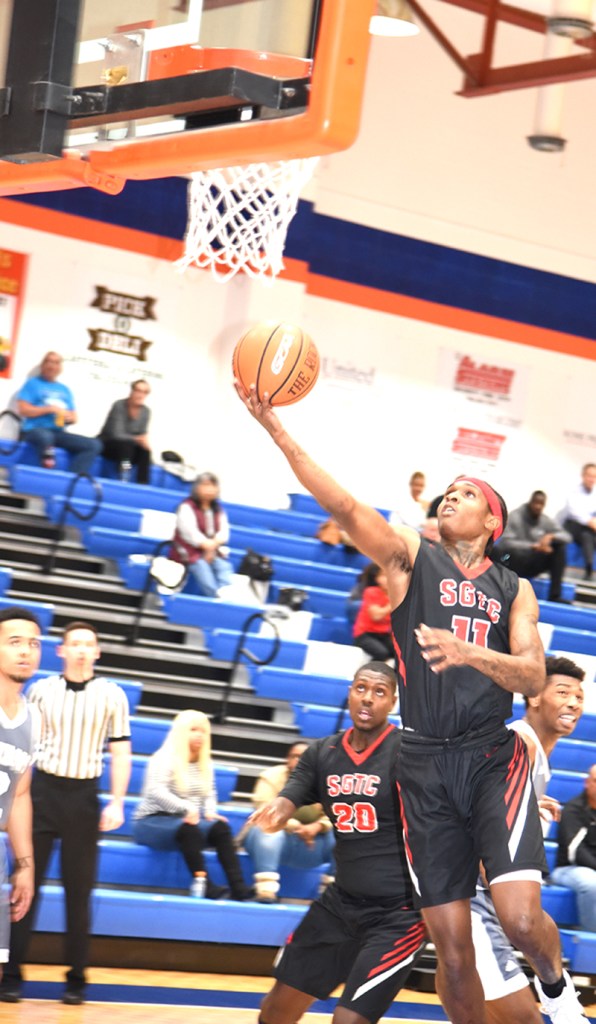 Dawan Bass is shown above going up for a layup against Georgia Highlands when he was a member of the South Georgia Technical College Jets. Photo by Su Ann Bird

JACKSONVILLE, FL – Former South Georgia Technical College guard Dawan Bass of Baltimore, Maryland was selected as an NAIA All-American Honorable Mention for his play on the court as a member of the Edward Waters College Tigers.

In just one season in Purple & Orange, Bass led EWC in scoring by averaging 14.86 points per game, which was 10th in the Gulf Coast Athletic Conference. Bass also led the Tigers in rebounds per contest (just under five per game). Bass scored a season-high 29 points to help lead EWC to an 80-76 victory over 22nd-ranked Talladega College on Saturday, February 8. In addition to his NAIA Honorable Mention All-American status, Bass was selected second team All-GCAC and was also a member of the GCAC All-Defensive Team. He helped lead the Tigers to a 13-14 overall and a 7-7 conference record.

Bass started at SGTC as a sophomore in 2017-2018. The 6 ‘4” guard averaged 12.7 points and 5.6 rebounds per game during his sophomore season as a Jet and was named to both the NJCAA Region 17 All-Tournament and GCAA All-Conference teams. Bass was also named to the GCAA All-Conference defensive team. Bass started in 29 games for Jets head coach Travis Garrett and helped the Jets to a 20-12 overall record.

After his time at SGTC, Bass signed with Rogers State University in Claremore, Oklahoma and played his junior season there. He helped lead the Hillcats to an overall 20-12 record and an 8-8 record in the Heartland Conference before transferring to EWC for his senior season.