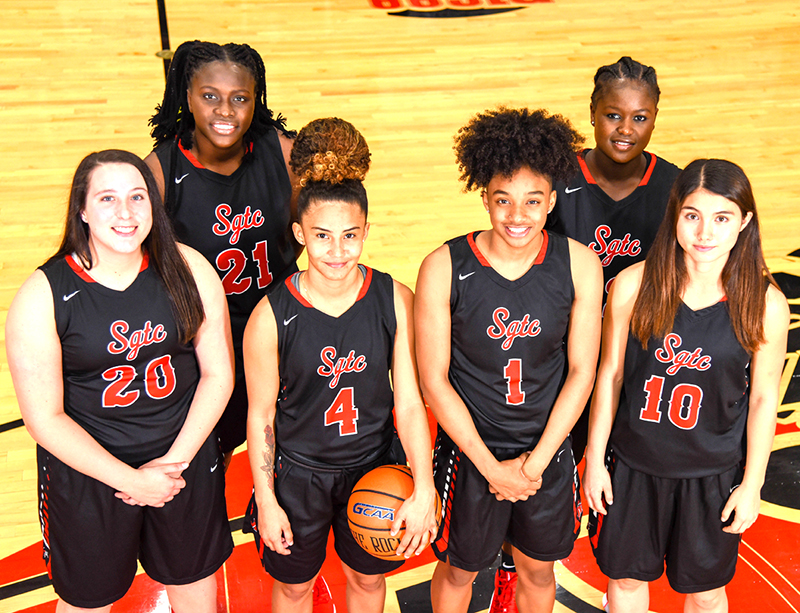 South Georgia Technical College’s six sophomores from the 2018 – 2019 season all signed letters of intent to play college and continue their education at the next level. Five players are making an impact in NCAA Division I. Shown (l to r) are Audrey Maulden (20), Bigue Sarr (21), Alyssa Nieves (4), Ricka Jackson (1), Fatou Pouye (12) and Mari Hill (10). Photo by Su Ann Bird

AMERICUS – Before the Coronavirus pandemic, six members of the nationally ranked South Georgia Technical College (SGTC) Lady Jets women’s basketball squad that graduated in 2019 were making quite an impact on the NCAA Division I and Division III colleges and universities across the nation.

Sarr, a 6’3 center from Kaolack, Senegal, signed with Oklahoma State University, Jackson, a 5’10 forward from Ewa Beach, HI, is playing at Texas Tech University, Pouye, a 6’0 forward from Kaolack, Senegal, is at Western Kentucky University and Nieves, a 5’7 guard from Tampa, FL, is making an impact at Morehead State University. Mari Hill, a 5’6 guard from Aichi, Japan, had a stellar 2019-2020 season at Bowling Green State University. According to BGSU’s athletic website www.bgsufalcons.com, Hill was second on the team in assists (2.7 per game) and had eight double-digit scoring games for the Lady Falcons during the 2019-2020 season. She played in 29 games and started 25 of them, averaging 6.1 points per game and 2.5 rebounds per game.

These six young women led the Lady Jets to their first unbeaten regular season conference record for head coach James Frey with an 18-0 performance to capture the Georgia Collegiate Athletic Association (GCAA) regular season title. The Lady Jets earned the right to advance to the National Junior College Athletic Association (NJCAA) for the fifth time in seven years and finished the season ranked 20th in the NJCAA during their sophomore season. 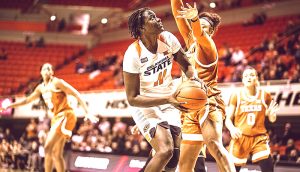 Former SGTC standout center and current Oklahoma State junior forward Bigue Sarr averaged 2.4 points per game and 1.8 rebounds per game for the Cowgirls during the 2019-2020 season.
Photo by Oklahoma State Athletics Sarr, who was a GCAA first-team All-Conference player at SGTC, was filling a key role for the Oklahoma State University Cowgirls before the season was cut short due to the coronavirus. According to OSU’s athletic website, www.okstate.com, Sarr played in 26 games for the Cowgirls and started three of them, while averaging 2.4 points per game and 1.8 rebounds per game. She helped lead OSU to a 15-15 overall record and a 6-12 record in the Big XII Conference.

Sarr’s teammate, Ricka Jackson, wound up playing in the Big XII NCAA Division I conference for Texas Tech University. According to the university’s athletics website, www.texastech.com, the Lady Raiders finished the season with an 18-11 overall record and a 7-11 record in the Big XII. Jackson played in 24 games and started three. She averaged 3.3 points per game and 1.5 rebounds per game.

Pouye, a second team GCAA player, is playing for the Western Kentucky Lady Toppers in the NCAA Division I Conference USA league. Poye played in 29 games and had one start. She averaged 3.0 points per game and 3.3 rebounds per game to help lead WKU to a 22-7 overall record. 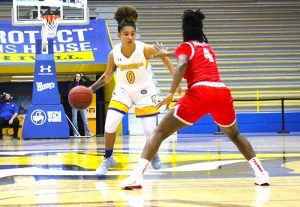 Nieves, an NJCAA Honorable Mention All-American, chose to play at Morehead State University, an NCAA Division I program out of the Ohio Valley Conference. Nieves played in 27 games and started four, averaging 2.9 points per game.

Mari Hill, MVP of the Region XVII championship tournament for SGTC, made history this season for the Bowling Green State University Lady Falcons, who compete in the NCAA Division I Mid-American Conference (MAC). Hill was the first Japanese basketball player ever to compete in the MAC.

The sixth member of the 2018-2019 Lady Jets to sign a letter of intent to play at the next level was Aubrey Maulden. Maulden is currently playing for Wesleyan College, an NCAA Division III school in Macon, GA. She played in 22 games this season and started 17 of them, averaging 4.3 points per game.

This season, the Lady Jets have six sophomores and they are still hoping to sign to play Division I basketball at the next level as well. They ended the season ranked 11th nationally and qualified for the NJCAA Division I women’s basketball tournament. Despite the cancellation of the national tournament, the current Lady Jets posted the best record in the history of the men’s or women’s college basketball programs with a 30-2 overall record. They also clinched their fifth consecutive GCAA regular season title and their fourth Region XVII tournament and District J championships. This season would have been the Lady Jets’ fourth consecutive trip to the national tournament in five years and their seventh trip in the history of the program.