As of right now, the Georgia High School Association (GHSA) plans for high school football to begin on Friday, September 4. However, 10 school districts have postponed the start of their seasons to as far back as October and some have canceled fall sports indefinitely. Submitted Photo

GHSA shuts down spring sports due to Coronavirus Pandemic

AMERICUS – Numerous high school baseball players, soccer players, lacrosse players and track & field athletes all across the state of Georgia, along with their coaches, were hoping this day would never come. However, the inevitable finally became a reality on Thursday, April 2, when the Georgia High School Association (GHSA) announced that all GHSA activities, including sports, have been cancelled for the remainder of the 2019-2020 school year.

“I especially want to commend the graduating seniors who have not only missed most of the spring season, but prom, senior nights, award ceremonies, possibly graduation, and spent the last few months away from their friends and classmates,” said GHSA President Robin Hines in a statement on the association’s website, www.ghsa.net.

The GHSA made this decision as a result of Georgia Governor Brian Kemp’s decision on Wednesday, April 1, to cancel all in-person instruction at all Georgia schools for the remainder of the 2019-2020 school year. The GHSA’s decision to cancel all activities was made even clearer when Governor Kemp issued a “Shelter in Place” order to the entire state the very next day.

This cancellation of all high school sports in Georgia has been an extremely tough pill to swallow for several seniors at local high schools here in Sumter and Schley Counties. At this time last year, the Schley County High School baseball team (SCHS) was in the process of marching their way to the GHSA Class A-Public State Finals.

The Wildcats eventually made it to the state finals. They defeated Gordon Lee 3-2 in the first game, but lost the next two games 2-0 and 9-3 and lost the state championship.

Current SCHS senior Garrett Peavy was a junior on that team a year ago and he, along with fellow seniors Trent Bivins and Logan Wurtz, was poised and ready to get back to the state championship series in 2020. However, the Coronavirus Pandemic has derailed their dreams for a chance to win that coveted state championship.

“Losing my senior year of baseball is really tough and really hard to wrap my head around. The fact that I will never get to play baseball again with a group of guys that have been with me through it all is heartbreaking,” said Peavy. “It sucks because we were pouring everything into this season hoping to make it our best one and get another chance at a state championship. Now we must live with this “what if” for the rest of our lives. I know that me and my fellow seniors still have a bright future and must keep moving forward because this is how life goes. One day, everything is all good and well and the next day it can all be gone. That’s why we as humans can’t take anything for granted. Make every day count cause it can be all gone in the blink of an eye. With all that being said, I love my school and love my team and I will always be a Wildcat!” 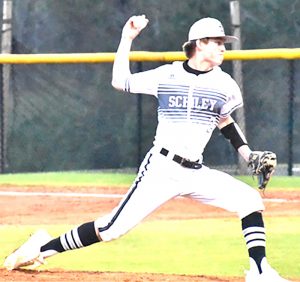 Schley County senior pitcher Garrett Peavy was looking forward to helping the Wildcats get back to the state championship before the Coronavirus Pandemic forced the GHSA to cancel all high school spring sports throughout Georgia.
ATR Archive

Peavy’s teammate and fellow senior, Trent Bivins, pretty much echoed Peavy’s sentiments about the situation. “It’s difficult to process how I feel right now. I’m disappointed we don’t have a chance to see our potential this year,” said Bivins. “I’m sad we are missing our senior season. We spend our entire high school career anticipating being a senior. It’s supposed to be our year and our season and suddenly, it’s gone. It’s going to take some time for all of us to adjust and move on. I am grateful to say I have had the pleasure of playing ball with some of my best friends and that I was able to play in a Wildcat uniform.”

Wurtz, who is also a senior on the team, is heartbroken that he will not see his senior season, but at the same time, he is grateful for the opportunity to have been able to play baseball for the Wildcats and for the lessons he has learned during his high school career.

“I never saw my senior year of baseball ending this way,” Wurtz said. “It’s honestly heartbreaking, not just because the season ended, but I have been playing with most of these guys my whole baseball career. I want to thank my coaches and my teammates for teaching me a lot over the four years. I want to thank the seniors for the hard work and dedication that they put into the game. I’ve been told my whole life things happen for a reason.” 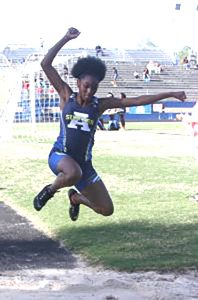 Americus-Sumter senior Lakyra Waters is seen here competing as a junior a year ago. Waters is extremely disappointed that her senior season has been cancelled as a result of the Coronavirus Pandemic.
ATR Archive

The Americus-Sumter High School girls track & field team was looking forward to another strong year before their season was cancelled due to the COVID-19 Pandemic. This has been a tough pill to swallow for ASHS senior Lakyra Waters.

“Not being able to participate in track for my last year really has made me devastated. Up until last year, I had never been able to exceed at track like I really wanted to,” Waters said. “I made it to sectionals and was planning on going to state this year, but with everything that’s going on in our country, I won’t be able to achieve my dream of making it to state before the end of my high school career.” 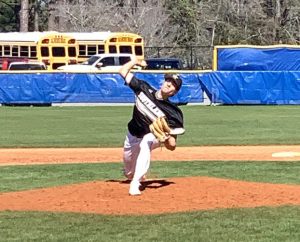 Southland Academy senior pitcher Clay Owens seen here pitching earlier this season. Owens was hoping to help lead both the Southland Academy baseball and track teams to state championships this year before their seasons were shut down due to the Coronavirus Pandemic.
ATR Archive

Southland Academy senior Clay Owens has already signed a football scholarship to Charleston Southern University, but he was looking forward to competing for the Raiders on the baseball diamond and the track this spring. Unfortunately for Owens, he and his fellow seniors will not get that opportunity as the Georgia Independent School Association (GISA), of which Southland is a member, has also cancelled spring sports.

“Our baseball team was doing great. We felt like we had a legitimate shot at a state championship,” said Owens. “That has been taken away from us, but we will keep our heads up and look to the future. I felt like we had a senior-heavy track team and that I had a shot at winning state in the long jump and the 4×100 meter relay, but I guess we will never know. The good thing is that we all have many great memories at Southland that can’t be taken away.”

The Schley County High School boys’ track & field team has won three consecutive region championships and was preparing to win their fourth-straight region championship this spring, but due to the Coronavirus Pandemic, they will not get a chance for a “four-peat”.

“My heart goes out to everyone that has dealt with and is having to deal with this terrible virus. My heart also goes out to all of the athletes of the Class of 2020 as they are having to deal with the virus and with the abrupt end of their senior seasons,” SCHS boys head track coach Scott Burgess said. “All athletes remember their senior seasons and I hate that so many young people had their seasons come up a few months short. To go along with having team goals, we also had a few girls and guys that were working very hard to improve their times, jumps, throws, etc. in an effort to increase their chances at college scholarships for next year.”

One of Burgess’s senior track athletes is Landon Dailey. The SCHS standout athlete made it to the state finals in the Boys’ Pole Vault competition and 4×100 meter relay at the state meet a year ago.

“All of us seniors were hoping to win Region this year so that we could say that we won Region all four years of High School,” Dailey said. “Even though I made it to the State Finals in the pole vault and the 4×100 last year, I was really looking forward to trying to make it on the podium at State (Top 8) in the 110 meter hurdles since I got 11th last year in that event.”

While this cancellation has been extremely hard on the student-athletes, especially the seniors, it has also ben difficult for the coaches and athletic directors as they were looking forward to coaching and seeing these fine student-athletes excel at their various sports.

“As a coach and athletic director, I am extremely disappointed, not surprised but devastated, that the spring sports season has now been officially cancelled,” SCHS Athletic Director Gabe Theiss said. “I hurt. I hurt for players, coaches, families, fans, communities and schools. Athletics is such a huge part of the educational process for student athletes. They learn more about life as a part of a team than they will in many other avenues of life. I hurt for them. I also hurt for my colleagues and myself. All of whom have poured their lives, blood, sweat and tears into the thing that they love. One day when sports are back, pour even more into it than you ever have because we know what it feels like for it to be taken. Seniors who may never play again, you are the ones I am most pained for.”

For those seniors, Coach Theiss wants to share a message of hope found in the Bible, specifically in Lamentations 3:17-27. He strongly encourages those seniors to read these verses.

“It was written after the Jews had been in captivity for many years and witnessed and felt much affliction,” said Theiss. “Verses 17-20 speak to the hurt they have felt, but it ends with some of the greatest words in all of scripture. Verses 21-27 are words that I say to myself during times like these. I pray these words give you hope during this time of hurt.”