The Conscript and the Freedom Fighter

On October 10, 2018, as Hurricane Michael neared shore, I drove to Andersonville National Cemetery to plan an upcoming tour. I first walked the graves. The burials, with a few exceptions, have created a timeline of death for the prison site from Adam Swarner on February 27, 1864 to Knud Hanson on April 28, 1865. Following the names and numbers in stone sequentially, it took 7,500 steps to walk the length of 13,000 people buried shoulder to shoulder. I then refamiliarized myself with the location of a handful of graves, including James Henry Gooding and Irving Hall, to make sure I knew where to go when the tour date came.

These two men did not represent a random sample of Andersonville and they were not representative prisoners. Both were African American men in a predominantly white prison and cemetery. In 2015, as a seasonal park ranger, I told visitors about Gooding. It was not until I began co-authoring a study on African American history for the National Park Service in 2017 that I learned Hall’s name. Over the years, the two men have come to represent a lesson about interpreting this Civil War cemetery. A heroic narrative about duty, honor, and country is relevant to public audiences, but that does not tell everyone’s story. Some histories are more provocative, more painful, and redefine those key words as the story challenges our perceptions of the past.

There were two stories of James Henry Gooding’s early life by the time he enlisted in the 54th Massachusetts Infantry. When he married Ellen Louisa Allen in September 1862, Gooding claimed to have been born free in Troy, New York, to James and Sarah Gooding. Those were his parents’ names, but the family never lived together in New York. Gooding was instead born in North Carolina to an enslaved mother; his father, a white man, purchased Gooding’s freedom and brought his son north in 1846. Five years later, according to historian Douglas Egerton, Gooding’s father purchased Sarah’s freedom and the two married—yes, married—in North Carolina.

By the mid-1850s, Gooding sailed on whaling ships out of New Bedford, Massachusetts. As former Andersonville park ranger Chris Barr writes, the maritime world was a freer place. “Whaling,” Barr points out, “was one of the few industries at that time in which an African-American man could find employment on equal footing with whites.” Perhaps this influenced Gooding’s later writings on equality during the Civil War. Indeed, his first extant writings—a series of poems—came from his years at sea. In “The Sailor’s Regret,” Gooding confronted the possibility of dying far away from his family in North Carolina. He concluded: “Well do I know that many a wild rover, / Has craved a grave ‘neath the wide rolling deep, / But as for me, when this weary life is over, / In my own native land I want to sleep.”

Gooding enlisted to redeem his native land after returning to shore. As a soldier in the 54th Massachusetts Infantry, he wrote more than forty letters to the New-Bedford Mercury, including an account of the famous assault on Battery Wagner in July 1863 depicted in the movie, Glory (1988). A few months later, in Gooding’s best-known writing, he wrote President Lincoln and called for the equalization of pay between white and black soldiers. “Now the main question is,” Gooding asked the president, “are we Soldiers, or are we Laborers?” His appeal was part of his life-long search for respect and equality.

Gooding’s struggle ended at Andersonville. Captured at the Battle of Olustee, Florida, he died of his wounds one month after Congress granted black soldiers the same pay as white soldiers. Whether Gooding knew about pay equalization is a matter of interpretation. Emphasizing the remoteness of the prison, Andersonville staff believe Gooding died unaware of these changes. Yet given the power of word-of-mouth communication known as the “grape-vine telegraph,” it is possible this information filtered down to southwest Georgia. Gooding’s reflections on captivity, though, went with him to the grave or, at least, no writings from imprisonment have been attributed to him. 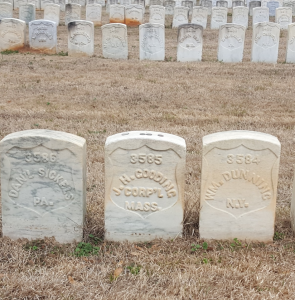 Gooding is the best-known African American prisoner at Andersonville. In a 2019 Facebook post, Chief of Interpretation Jody Mays described Gooding as “a man ahead of his time” who “fought and died for a country that had enslaved him, and for freedom denied to him from birth…. He was a man of courage and honor who literally rose up from the shackles of slavery to demand equal treatment from a president and a nation.” Gooding hits all the marks of a self-made hero and martyr for the cause of liberty. Visitors leave coins on his grave as show of respect.

Interpreting the national cemetery would be easier if every grave represented a hero and a willing martyr. It extracts a greater emotional toll to tell—or hear—the story of Irving Hall’s life and death. According to his service records, Hall was a free man from Delaware in 1861. His mother, a widow named Phoebe White, told a different story when she applied for death benefits entitled to dependents of fallen soldiers. In her telling, the family became separated across the Maryland/Delaware state line in slavery. Her son, Irvin Hall, escaped from slavery when his enslaver died some time before 1863. Until he became a soldier, Hall provided clothing and provisions to his still-enslaved mother in Maryland.

When Hall entered the U.S. army in Smyrna, Delaware, in the summer of 1863, he did not join voluntarily. Threat of the draft was designed to motivate men into volunteering, but about 50,000 out of 2.1 million U.S soldiers were physically compelled to join. The U.S. Government forced Hall, alongside many soldiers in the 8th United States Colored Infantry, into service. There was good reason for Hall to want to avoid the war. Physically, Hall did not look like much of a soldier. He was short than average: 5 feet, 2 ½ inches tall. He was also poor, a fugitive from slavery, and it would be difficult to stretch the small, unequal pay to help his mother. Who could blame Hall for resisting the call to volunteer?

During his first and only battle at Olustee, Hall fell wounded and into enemy hands. Although Confederate soldiers killed many black prisoners after the sun set on the battlefield, Hall survived the battle, a makeshift hospital, and the train ride that took him through Americus on his way to Andersonville. There the Confederate army enslaved able-bodied black prisoners. Hall’s wounds may have prevented re-enslavement, but those same injuries made his chances for survival grim. On April 24, 1864, Hall became the first black prisoner of war to die at Andersonville. He was about twenty-one years old. 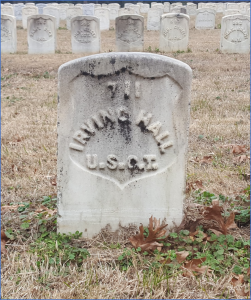 Conscription by the US government was one violence committed against Hall. Another came in his wounding, imprisonment, and death at the hands of Confederate soldiers. A third moral tragedy took place after the Civil War. Claiming that Phebe White could not show proof of material support from a son separated by slavery and distance, the US government rejected the widowed mother’s pension claim.

Histories are neither neutral nor separated from the time and place of their production. Historic site interpretation may feel safe when it does not confront a learner with troubling history and moral ambiguity. Gooding’s death was tragic but not in vain. In his pre-capture writing, he self-consciously created an image of himself as a freedom fighter struggling against injustice. He can be remembered as a martyr in his native land.

The grave of Irving (or Irvin) Hall does not offer us a clear moral resolution. Hall may have been as much a freedom fighter by the time he died as Gooding, but to the US government his motivation was irrelevant. In contrast to the man who gave all; enrollment officials took everything from Hall. Did Hall believe that the US government controlled his body as had the hands of his enslavers? After the young man’s death, different government officials abandoned his elderly mother to poverty. It reminds us that not every Civil War death can be clearly defined by assumed loyalties or the same understanding of duty, honor, and courage. Perhaps for his memory, and for his mother’s, an apology is more fitting than a flag on Memorial Day.

In walking the cemetery that windy October morning, I decided to trust that my future visitors could handle troubling history. What better place to talk about closure—or the lack of closure—than a cemetery? We would read the poetry of the freedom fighter but not before recognizing the violence committed against the conscript. These two stories, alongside a handful of others, would help move beyond the staggering numbers and humanize the individuals who died at Andersonville.

Friendly advice on working from home