Daniel Stallings, his wife, Maggie, and his stepson, Charles, offer a fresh look at an old tragedy. It might be true to say that Stallings was “in the wrong place at the wrong time,” but that idiom conceals more than it reveals. Even in the Jim Crow era, Cotton Avenue in Americus, Georgia, should have been the right place to be on Saturday, June 21, 1913. Saturdays were often prescribed days for rural African Americans to come to town to buy groceries, get the news, and enjoy a city’s entertainment. Stallings was in part of the commercial and cultural center of black Americus.

What made that summer solstice different was the altercation between Americus Police Chief William C. Barrow and William Redding at the corner of Lamar Street and Cotton Avenue. We may not know exactly what triggered the encounter; however, three men, two black and one white, died in its aftermath. That evening a white mob entered the Americus jail, took the already wounded Redding back to the corner of Lamar and Cotton, and murdered him in a public spectacle of white supremacy. Hundreds of local whites participated and the Americus Times-Recorder covered the event in grisly detail. Chief Barrow died six days later of a wound he received from his own gun—supposedly fired by Redding. Daniel Stallings, one of three wounded bystanders, died from a bullet fired by one of Redding’s pursuers after the police chief fell wounded.

Histories change over time. When historians review previous work on a subject, they evaluate not only the answers (the “story”) but also the questions that framed it. This violence in Americus was not exceptional; it was emblematic of an era of racial terror that affected the region and nation. The only historian who has written about our local example focuses on Barrow, Redding, and the white mob. What was lost—what first compelled me to go to the records—was the story of the fatally wounded bystander. This journey convinced me of the importance of writing a series of articles about the meaning of the 1913 lynching and its central figures.

It could be said that local whites killed Daniel Stallings twice. The first came as the collateral damage of white supremacy: white men prioritized capturing a suspect over the safety of African American shoppers. Stallings died because—to the armed white men—his life did not matter. Stallings likely heard the initial gunshots, and he must have been looking south on Cotton Avenue when the bullet struck his abdomen. His second death came in the remembering of the event. Whereas the Times-Recorder praised Barrow’s service in the Confederate army fifty years earlier and expressed hope for his recovery, the editor did not extend the same blessing to Stallings. He only described Stallings by his supposed occupation, a “field hand,” and predicted (correctly) that the bullet wound would be fatal. This trivialization of tragedy was also a byproduct of white supremacy. 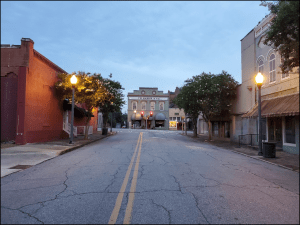 The burials of Redding, Barrow, and Stallings reflect both remembering and forgetting. Redding had no recorded burial. White men burned his body in the street and, according to local historian Alan Anderson, kept ghastly trophies to remember the event. In fact, beyond Redding’s name and what the mob did to him, we know almost nothing about his life. Barrow, in contrast, has two memorials in Oak Grove Cemetery. A third marker sits in a memorial garden in front of the Americus Police Department. The family inscription, adjacent to his Confederate headstone, bears a parting shot: “Blessed are the merciful, for they shall obtain mercy.” Stallings’s gravestone in Eastview Cemetery came as a surprise. It answered questions I had not known to ask. It raised new questions that let me see his death with fresh eyes.

Gravestones are expressions of the living. As with the inscription on Chief Barrow’s grave, Stallings’s memorial speaks to a mourning family’s decision. The monument, constructed by Schneider & Co. in Americus, is shaped in the form of a pulpit. It displays an open bible and the inscription “Thy Will Be Done” above the basic biographical information: “Dan Stallings/March 15, 1885/July 22, 1913.” This inscription is the first and—to my knowledge—only record that Stallings suffered for more than four weeks. The bottom inscription promises not to forget. It reads, “Shrined in our hearts/thy memories fair/Shall reign till life/doth cease.” The adjacent grave of Stallings’s wife, Maggie, as well as Maggie’s third husband, Edward Sloan, indicate that Maggie kept her promise. 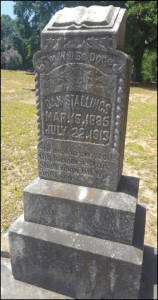 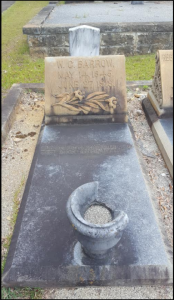 Who were the Stallingses? In 1900, a census worker overestimated Daniel Stallings’s age by six years, mistaking the teenager for a twenty-one-year-old “field hand.” He lived on Lambert Street with his father, Vic, and several siblings. Yet the impressive monument that Maggie selected in 1913 makes it obvious that Daniel was not a “field hand” when he died. He worked for the railroad by 1910. Maggie worked as a laundress. When they married, Daniel gained a stepson, Charles Hughes. The family owned a house on Lambert Street and their property backed up to Eastview Cemetery.

Less than one month after her husband’s death, Maggie bought a house at 405 Winn Street. It is unclear why she bought the house. Was there a life insurance policy? Did she feel unsafe in the old house? Had Daniel and Maggie been saving for a new home? Was the pain of staying in the house too great? She must have had a reason for paying $400 (roughly $10,000 today) for a house so soon after her husband’s death.

Maggie and Charles narrowly avoided a second tragedy. After Daniel’s death, Maggie continued to work as a laundress; her son finished high school and found work as a driver. Still, the two struggled to make ends meet. In 1914, Maggie signed a risky four-year security deed with the Calvert Mortgage Company. For $200, Maggie agreed to pay $5.50 a month plus 10 percent of the principal and “attorney fees, if sued.” She also agreed to pay the full debt immediately if the Lambert Street house burned down and would forfeit the house if she missed one payment. She signed the deed with an “X” because, unlike her son and deceased husband, Maggie could neither read nor write. In 1915, for $95, she signed a second security deed on the Winn Street house and sold the Lambert house for $55.

Maggie’s risky refinancing strategy to retain ownership of her house on Winn street succeeded. In April 1919, she remarried and Maggie and Edward Sloan lived at 405 Winn Street for the rest of their lives. At some point before 1930, Charles left Georgia, settled in Hartford, Connecticut, and lived there for the rest of his life. Maggie deeded the house to her son for the price of “love and affection” as well as a life-estate on the property, but Charles died in 1951, two years before his mother. When Edward Sloan buried Maggie in Eastview Cemetery, he placed her to the left of her second husband, Daniel. When Edward died in 1958, he was buried on her left side. At certain times of the day, Daniel Stallings’s monument casts a shadow over the smaller graves in the same family plot. The Times-Recorder forgot about Stallings before his death; the family never forgot.

New Light on an Old Tragedy

History can be fragile. I learned more about the Stallings family and the effects of that violence on June 21, 1913, from a cemetery plot than I did from the Times-Recorder. The headstones, combined with census and local records, underscore how persistent research can reveal crucial information. I had known about the lynching for four years, but the Stallings angle suddenly pushed me to reevaluate the whole event. If the 1913 editor of the Times-Recorder had been unsympathetic to wounded bystanders, could I trust him to faithfully report the encounter between Chief Barrow and William Redding? What other sources would confirm, refute, or help contextualize the paper’s reporting?

The next articles in this four-part series, especially articles two and three, may be more challenging to read. They were certainly more challenging to write. Along the way, I seek to humanize central people in the 1913 lynching: William Barrow, William Redding, and a detractor from the dominant narrative who will be revealed in the third article. The purpose is to better understand and interpret the past in its local, regional, and national context. There are also, after 107 years, new opportunities to commemorate this tragedy in ways that look to the past to build a better foundation for a more just and peaceful future.

Part 2 of this series will appear next week. Until then, feel free to contact me at evan.kutzler@gsw.edu with any information about the event or its aftermath.

Except D.C., Carter Victorious in May, “We Won All…