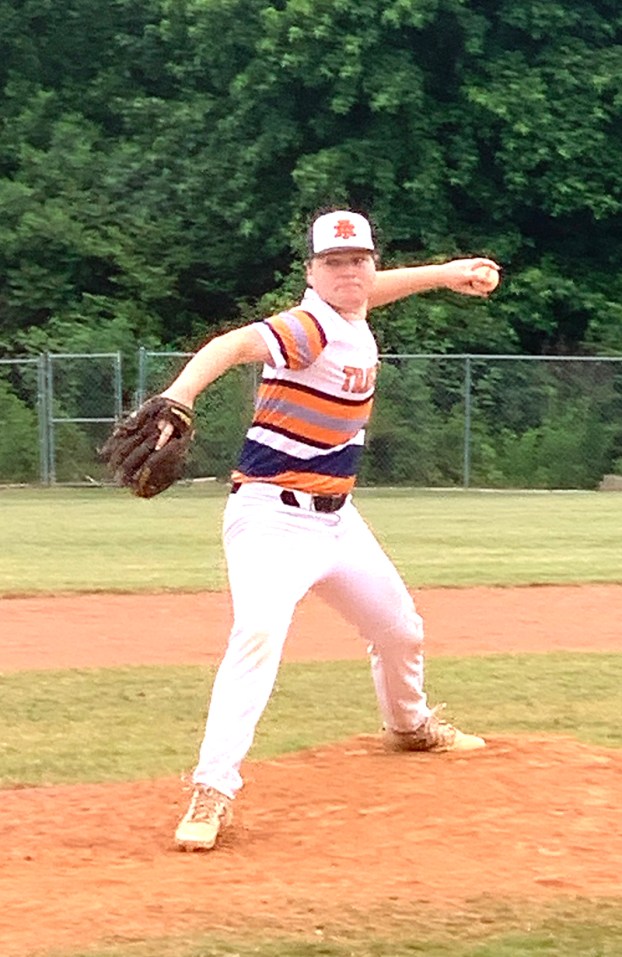 Americus Travelers pitcher Landon Kight struck out seven batters to help lead the Travelers to a 9-2 victory over Northside NRG in Game 1 of the Training Legends Blowout Tournament at Praise Academy in Powder Springs, GA. Kight also laid down a suicide squeeze bunt, which allowed a run to score in ATB’s 6-0 win over the Medlock Monarchs. Photo by Ken Gustafson

POWDER SPRINGS, GA – The 15U Americus Travelers Baseball Team (ATB) made the return trip to Praise Academy in Powder Springs, GA and won the first two games of the Training Legends Blowout Tournament on Friday, June 19. They defeated Northside NRG by the score of 9-2 and followed that up with a 6-0-shutout victory over the Medlock Monarchs.

ATB Head Coach Tim Estes was extremely pleased with his club’s performance in the first two games of the tournament.

“I thought all of our pitchers were sharp tonight. We started slow in Game 1 at the plate, but after we got through the line up one time, we looked much better”, said Estes. “In Game 2, I felt like we found our identity. We hit well and got on base early. We bunted well and played some hit and run. We even executed a squeeze bunt to perfection. As a coach, it’s rewarding to see them playing at such a high level.”

That squeeze bunt Estes was referring to took place in the second inning of Game 2 against the Monarchs. With one out and runners at second and third in the bottom of the second, Landon Kight laid down a well-executed suicide squeeze bunt, which allowed Peyton Tompkins to score from third. Tompkins’ run was the first of two runs that the Travelers scored in that inning on their way to their 6-0 victory.

In that game, Thomas Ray led ATB’s offensive attack by going 3 for 3 at the plate with two doubles, a single, two RBIs and two runs scored. Chase Ledger also had a multi-hit game, as he went 2 for 3 with an RBI single and a run scored.

Owen Lamb turned in a solid performance on the mound for the Travelers. In three innings of work, Lamb did not give up a run or a hit and struck out five batters while walking three. Tripp Thomas came on in relief of Lamb. In the final two innings, Thomas gave up no runs on one hit, walked three hitters and struck out three.

In total, the Travelers scored six runs on 10 hits and committed three errors, while the Monarchs did not score a run and could only muster one hit.

For the first four innings of Game 1 against the Northside NRG club, it was a pitchers’ dual, with the Travelers leading 3-2. However, ATB broke the game open in the bottom of the fifth inning by scoring six runs. Kight led off the frame with a leadoff double and Ray followed that up with an RBI double. Tripp Thomas then singled home Ray to increase ATB’s lead to 5-2 and Ledger followed that up with a single, putting runners on first and second with nobody out. 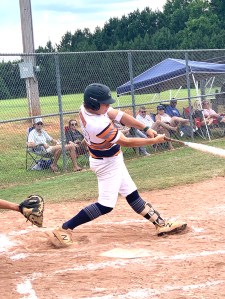 Americus Travelers third baseman Chase Ledger went 2 for 3 at the plate and scored two runs to help lead ATB to a 9-2 win over Northside NRG in Game 1 of the Training Legends Blowout Tournament.
Photo by Ken Gustafson

After Thomas advanced to third on an error by the Monarchs’ shortstop, Thomas “Chewy” Willis drew a walk to load the bases for Caden King. King then drew an RBI walk to increase the Travelers’ lead to 6-2 with still nobody out. Then with the bases loaded, Dylan Davis belted a two-run double to give the Travelers an 8-2 lead. ATB finished off the game as Tompkins reached on an error, which allowed the ninth and final run to score.

Caden King started on the mound in Game 1 for ATB. He pitched two innings and gave up two runs on three hits. He walked two batters and struck out three.

Kight came on in relief of King and dominated the rest of the way. He gave up no runs or hits and struck out seven NRG batters.

Now that the Travelers have gone undefeated in pool play, they will enter the knockout stage of the tournament on Saturday, June 20, by facing the Atlanta Lightning at 12 p.m.