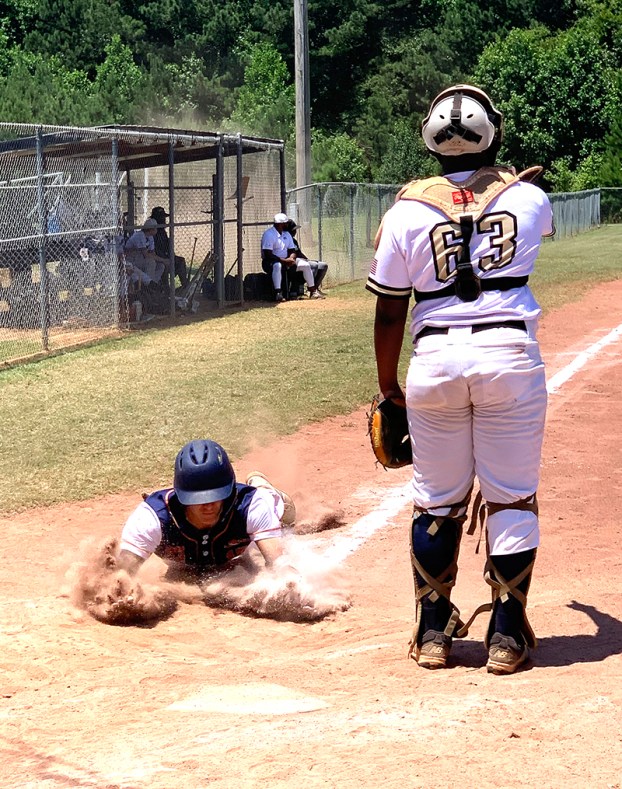 POWDER SPRINGS, GA – After winning their first two games in convincing fashion on Friday, June 19, the Americus Travelers 15U All-Star baseball team (ATB) came into Saturday’s game against the Atlanta Lightning poised and ready to fight their way to another tournament championship at the same venue where they won last weekend’s Training Legends Georgia State Tournament. However, the Lightning scored seven runs in the first inning, putting the Travelers in an early hole. Though the Travelers made a furious comeback to get to within two runs of tying the game, they were unable to do so and were eliminated by the Lightning 8-6 in the knockout stage of the Training Legends Blowout Tournament at Praise Academy in Powder Springs, GA.

After Thomas Ray flew out for the first out in the bottom of the fourth inning, Tripp Thomas was able to draw a walk and stole second base. Chase Ledger Flew out to right field, advancing Thomas to third. With two outs, the tying run came to the plate in the form of Thomas Willis, but Willis flew out to right field to end the game.

The Lightning went on to win the Training Legends Blowout Tournament by defeating the Cobb Colt 45s 10-3 in the semifinals and beating Charlie Culbertson Baseball 11-1 in the championship game.

“We had a rough first inning giving up seven runs, but I thought we battled back and had several opportunities to even things up,” said ATB Head Coach Tim Estes. “Our kids gave maximum effort and I’m proud of the way they fought back. We don’t make excuses. Yeah, we had two calls that hurt us badly, but that’s baseball and we have to play through it. We will be better because of playing solid teams like we played this weekend.

The Lightning plated seven runs on six hits in the top of the first inning, including a three-run home run by catcher Kaleb Raston. The Travelers answered in their half of the inning when Tripp Thomas scored on an error by the Lightning third baseman. 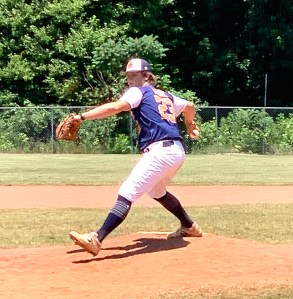 Americus Travelers pitcher Chase Ledger allowed one run on one hit, walked four and struck out two batters in the Travelers’ 8-6 loss to the Atlanta Lightning.
Photo by Ken Gustafson

After the Lightning added another run in the top of the second inning to increase their lead to 8-1, the Travelers exploded for four runs on five hits in the bottom half of the inning to cut the deficit to 8-5. With one out in the inning, Owen Lamb singled and Peyton Tompkins doubled to put runners at second and third. Gavin Lacey then knocked in a run on an RBI single, followed by a two-run double by Landon Kight. After Ray reached on an error by the Lightning second baseman, Thomas lined out to third base for the second out. However, the Travelers were able to score one more run in the inning when Ledger doubled to left field. Thomas Willis struck out to end the inning, but the Travelers were right back in the game, trailing 8-5.

Ledger, who was on the mound for the Travelers at that time, was able to hold the Lightning scoreless in the top of the third, giving the Travelers another chance to chip away. Caden King led off the bottom of the third with a single and both Dylan Davis and Owen Lamb drew walks to load the bases with nobody out. Tompkins then reached on an error, allowing King to score and the Travelers to get to within two runs of tying the game. However, Gavin Lacey struck out for the first out and Kight hit into a double play to end the threat.

Ledger once again was able to keep the Lightning scoreless in the top of the fourth inning, which gave the Travelers one last chance to tie or win the game in the bottom half of the inning. After Thomas Ray grounded out to third for the first out, Tripp Thomas was able to draw a walk off Lightning pitcher Duskin Balch. However, there would be no come-from-behind win for the Travelers, as Ledger and Willis both flew out to right field to end the game. 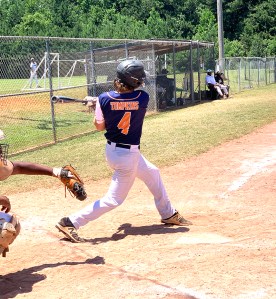 Americus Travelers left fielder Peyton Tompkins went 1-for 2 with an RBI and a run scored in the Travelers’ 8-6 loss to the Atlanta Lightning.
Photo by Ken Gustafson

The Lightning scored eight runs on seven hits and committed three errors, while the Travelers scored six runs on six hits and committed one error. No one had multiple hits in this game for ATB, but Landon Kight went 1 for 2 with a run scored and two RBIs. Both Tompkins and Lacey each went 1 for 2 with a run scored and one RBI. Lamb, King and Ledger each had one hit in the ball game and Ledger drove in an RBI.

Thomas Ray was the starting pitcher for the Travelers, but immediately ran into trouble in the top of the first. He gave up four earned runs on two hits. Willis came on in relief of Ray and pitched one inning. He gave up three earned runs on four hits, walked one batter and struck out two. Ledger came on to pitch the last three innings of the game for the Travelers. He gave up only one run on one hit, walked four and struck out two.

Bobby Yarbrough led the Lightning’s offensive attack by going 2 for 3 at the plate with a run scored. Kaleb Raston went 1 for 3 in the ball game, but that one hit was the three-run home run in the top of the first inning that helped the Lightning build an early 7-0 lead.

The Travelers will once again make another trip next weekend up to the Atlanta metro area to compete in another tournament. Dates, game times and tournament venue are to be determined at this time.