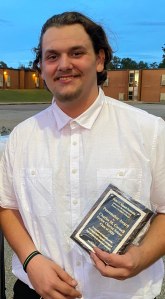 The Mattie J.T. Stepanek Foundation presented its inaugural Peace Certified School Peacemaker Award to Charles M. Cornell, Furlow Charter School Class of 2020, at its Baccalaureate ceremony on May 29, 2020. The award was given in recognition of Charlie’s contributions to the Furlow Charter School Peace Plan, which earned Furlow the distinction of becoming the first school in the south to earn Peace Certification by the Mattie J.T. Stepanek Foundation. Charlie crafted his International Skills Diplomas Seal capstone project around designing and constructing the school’s Heartsong Peace Garden, including a welded metal peace sign sculpture, raised beds, and concrete walkway leading to a peace pole.

Bridges Dean, Foreign Language Advisor and Service Learning Coordinator JoAnna Arnold stated, “Like Mattie Stepanek, Charles understands how to be a changemaker and an instrument of peace in his community. Mattie described a heartsong as ‘something deep inside of us, our sense of why we are here and how we can keep going…our purpose.’ Many congratulations to Charles for helping future scholars at Furlow discover their purpose and place in this world.”

Mattie J.T. Stepanek Foundation CEO Jeni Stepanek (a/k/a Mama Peace) added, “Peace matters. It begins with a choice in attitudes and habits that shape realities. This Peacemaker Award recognizes Charlie’s outstanding commitment to serving as a role model and choosing to bring Mattie’s message of peace to his school and his community.”

Faces of COVID-19 in Sumter County