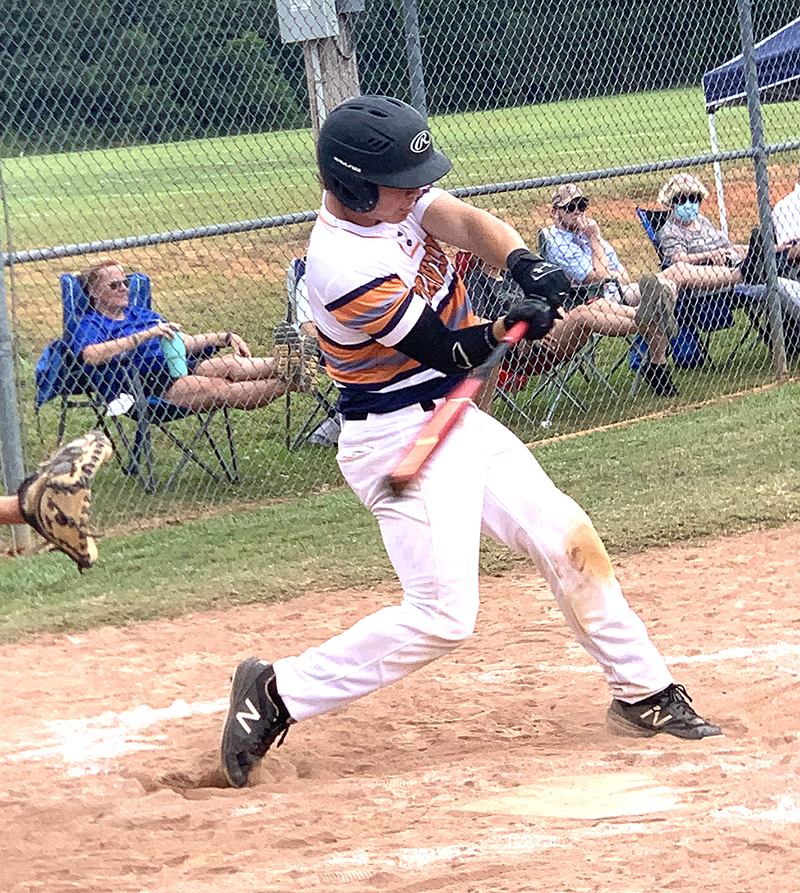 Gavin Lacey of the Americus Travelers belted a two-run home run to help lead the Travelers to a 16-2 win over the Palmetto State Wolverines in Game 4 of the Top Gun Summer Nationals in Myrtle Beach, SC. ATR Archive

MYRTLE BEACH, SC – The 15U Americus Travelers Baseball Team (ATB) showed why they have one of the best youth travel baseball programs in the Southeast on Friday and Saturday by winning four straight games in pool play in dominating fashion at the Top Gun Summer Nationals in Myrtle Beach, SC.

The Travelers won all four games in the pool play phase of the tournament, outscoring their opponents by a total of 47-8.

In their first game of the tournament on Friday, July 10, the Travelers struggled to pull out a 6-4 victory over the SC Force 15U squad. SCF jumped out to a 1-0 lead in the top of the first inning, but the Travelers responded with four runs in the bottom half of the inning. With runners at second and third and nobody out, Chase Ledger singled to center field, driving in Thomas Ray for the tying run. Caden King later scored on an error to give ATB a 2-1 lead. Later on in the inning with two outs, Tripp Thomas reached on an error, which allowed both Ledger and Thomas Willis to score.

SCF showed why they belong in this tournament as well. They scored three runs in the top of the second inning to tie the game. With two outs and the bases loaded, Brody Fowler reached on a dropped third strike, which allowed a run to score. Then Drew Culpepper drove in two more runs on an RBI double to right field.

However, as they have done just about all season, the Travelers responded in the clutch. In the bottom of the second inning, Peyton Tompkins led off with a single and Ray drew a walk to put runners at first and second with nobody out. After King executed a sacrifice bunt, which moved the runners to second and third, Ledger was able to drive home Tompkins on a fielder’s choice to give ATB a 5-4 lead. Then with two outs, Ray was able to score on a passed ball to increase the Travelers’ lead to 6-4.

It turned out that those two runs would be all that was needed for ATB to secure the victory. Willis came in and pitched two scoreless innings to help the Travelers earn their opening 6-4 win.

The Travelers had a much easier time of it in their second game against the 15U Myrtle Marlins. They scored seven runs on four hits in the bottom of the first to take a commanding 7-0 lead. The big hit in the inning came off the bat of Landon Kight, who drove in three runs on a double to center field.

“We got off to a great start today. We hit the baseball well. All four of our pitchers that threw today pitched to contact and we made plays behind them,” said ATB Head Coach Tim Estes.

The Travelers used three pitchers in this game. Chase Ledger started on the mound and gave up no runs or hits in two innings pitched. He also struck out four batters. 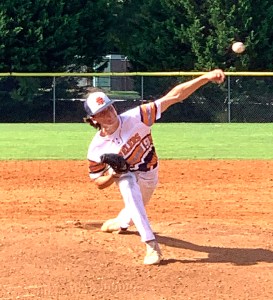 Americus Travelers starting pitcher Owen Lamb gave up two runs on one hit, but also went 1 for 2 at the plate with a run scored and an RBI in the Travelers’ 16-2 victory over the Palmetto State Wolverines at the Top Gun Summer Nationals in Myrtle Beach, SC.
ATR Archive

ATB’s final game of pool play on Saturday against the Palmetto State Wolverines (PSW) ended up being another resounding lop-sided victory. They jumped out to an early 7-2 lead and scored eight more runs in the top of the third inning, including a two-run home run by Gavin Lacey. Those two offensive outbursts were enough for the Travelers to secure a 16-2 victory.

Thomas Ray led off the game with a triple. That at bat would set the tone for the rest of the contest. After Caden King drew a walk to put runners at first and third, Ledger grounded into a fielder’s choice, allowing Ray to score the first run of the game.

The Travelers went on to add six more runs in the inning on RBI doubles from Tripp Thomas and Peyton Tompkins to take and early 7-0 lead.

PSW responded with two runs in their half of the inning, but the Travelers added another run in the top of the second when Thomas Willis drove in Caden King on a fielder’s choice.

However, the Travelers were far from finished, as far as offense was concerned. They would score eight more runs on seven hits, including the two-run home run by Lacey. That eight-run onslaught in the top of the third effectively put the game away for the Travelers. While ATB played solid defense in this game, PSW committed four errors and the Travelers were able to take advantage.

As a result of going undefeated in pool play, the Travelers will be the No. 1 seed and will get an automatic bye to the semifinals on Sunday, July 12. They are two wins away from winning the Top Gun Summer Nationals. Stay tuned to the Americus Times-Recorder for further coverage.