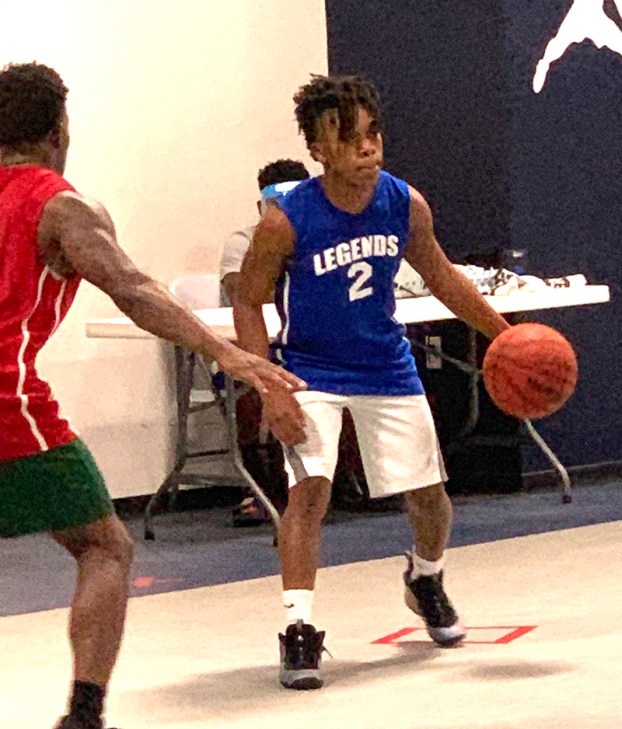 Legends guard Melton McCoy (2) scored 11 points to help lead his team to its first victory of the season in the SCPRD Adult Summer Basketball League. Photo by Ken Gustafson

Top Flight no longer undefeated, but Legends no longer defeated

AMERICUS – On the evening of Saturday, July 25, something had to give. Top Flight (TF) came into the close of Week 2 of the Sumter County Parks and Recreation Department (SCPRD) Adult Summer Basketball League with an undefeated record of 5-0 while the Legends (0-5) were seeking their first win.

However, it would be the Legends that would end their own winless streak as well as the unbeaten streak of TF on this day. Scott Sheffield poured in 26 points to lead the Legends past TF by the score of 79-74, ensuring that they would not go through the season without a win and that Top Flight would not finish the season unblemished.

Former Americus-Sumter star and current Legends shooting guard Wallace Bradley is not one that is use to losing. Bradley was able to score 19 points, mostly on the strength of five three pointers, to help the Legends to victory. 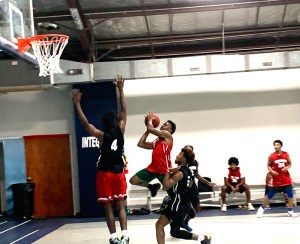 Sh’Qual White was also in double figures for the Legends with 18 points and Melton McCoy scored 11. Cedric Gardner had one three pointer and both Eddie Brown and Michael Welborn each scored two points to round out the Legends’ scoring.

The Legends got off to a terrific start by jumping out to a 10-3 lead, but TF kept it close during the remainder of the first half and overtook the Legends to take a 42-38 lead at the half. Both Stepfon Luster and Shomari Gaines led Top Flight with 12 first-half points while White led the Legends with 11 points in the first half.

In the second half, the Legends regained their stride and led most of the way. Then with 1:11 to go, Bradley was able to score to put the Legends up by 10 at 77-67.

Top Flight made a furious run during the last minute of play to try and keep their undefeated season alive, but the Legends were able to hold on and win by the score of 79-74.

For Top Flight, they were led in scoring by former Americus-Sumter standout and GSW Hurricanes guard Eric Hall, who scored 20 points. Luster scored 16 points. Gaines had 14 and Kevin Stone chipped in 13 for TF in the losing cause. 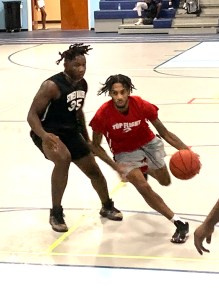 Before Top Flight fell to the Legends, the Street Ballers gave the boys in red a stern challenge. Being that there are only three teams in the league, each of the teams gets a chance to play back-to-back games and on this night, it was Top Flight’s turn to do that.

It was a hotly contested game between the two teams the entire way, but TF was able to come from behind and win by the score of 102-100.

Midway through the second half, it looked as if the Street Ballers (STB) were going to be the ones that would end Top Flight’s unbeaten streak as Jontavious Jernigan drilled a five pointer to give STB a 69-60 lead. In this league, there are three red squared placed nine feet behind both three-point lines. If a player hits a shot from one of those red squares, it’s a five-point basket.

As the game neared its conclusion, Jernigan nailed a three pointer to give STB an 84-77 lead. It seemed as if it was going to be the Street Ballers’ day. However, Stepfon Luster had other ideas. 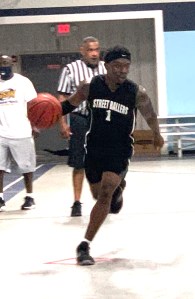 With Top Flight trailing 98-94, Luster sank a five pointer to give his team a one-point lead. Luster then got it done on the defensive end by coming up with a steal. On TF’s ensuing possession, Kevin Stone was fouled in the act of shooting and made one of two foul shots, giving TF a 100-98 lead.

The Street Ballers responded as Mike Flemmings was fouled and made both free throws to tie the game at 100-100.

However, Top Flight would have the last shot of regulation. With about four seconds left, Eric Hall penetrated the lane and scored the game-winning layup to give TF a thrilling 102-100 victory.

Luster led Top Flight with 34 points and Le’Shannon Ross scored 17. Eric Hall chipped in 14 points, Kevin Stone had 13 and Shomari Gaines chipped in 10 in the winning cause.