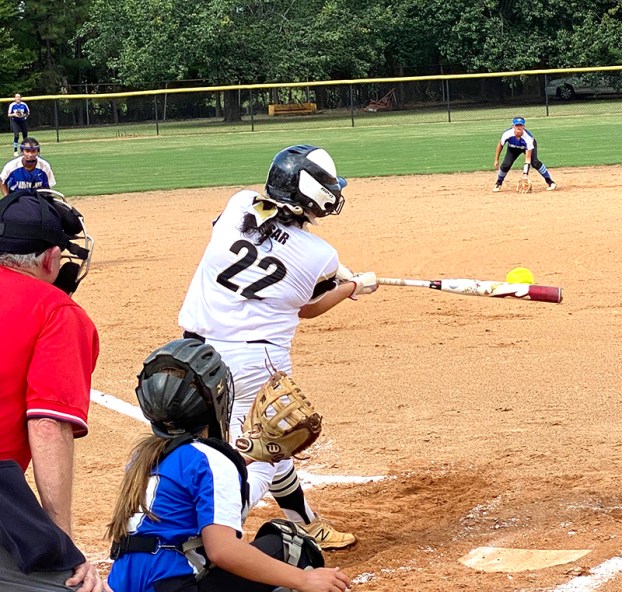 Southland Academy right fielder Katie Rogers drove in an RBI on a sacrifice fly in the bottom of the sixth inning to help give the Raiders a 2-1 victory over the Knights of Windsor Academy. Photo by Ken Gustafson

Rogers’ sacrifice fly proves to be the game winner for Raiders

AMERICUS – After their 15-5 trouncing of archrival Deerfield-Windsor in Albany on Thursday, August 13, the Southland Academy (SA) Raider softball team (3-2) wanted to continue their good fortune against another school named Windsor: the Knights of Windsor Academy in Macon (WA). For the entire game, it was a pitchers’ dual between the Raiders’ starter Alli Dent and the Knights’ starter Sierra Ussery. However, with the game tied at 1-1 in the bottom of the sixth inning, the Raiders had runners on second and third with two outs. Right fielder Katie Rogers took advantage of the situation by hitting a sacrifice fly that scored Brookland Weaver to give the Raiders a 2-1 victory on Tuesday, August 18, at the Southland Academy softball complex.

With the Knights leading 1-0 in the bottom of the sixth, SA shortstop Holly McCain began the sequence of events leading up to Rogers’ game-winning RBI by leading off the Raiders’ at bat with a single. Weaver followed that up with a bunt single, which allowed McCain to advance all the way to third base. Reese Roland then grounded out to second, allowing McCain to score the tying run and advancing Weaver to third. Dent, SA’s next batter, was hit by a pitch, putting runners at first and third for the Raiders with one out. 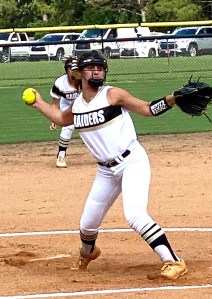 Southland Academy pitcher Alli Dent only gave up one run in seven innings to help lead the Raiders to a 2-1 victory over Windsor Academy.
Photo by Ken Gustafson

After Dent stole second base, Rogers finished a hard-fought at bat by sending a fly ball to center field. Though the ball was caught for an out, Weaver was able to score from third to give the Raiders a 2-1 lead going into the seventh inning.

Dent, who had allowed only one run in six innings of work, ran into trouble in the top of the seventh. With one out, Eboni Medina singled to put the tying run on for the Knights. Lola Newberry drew a walk and the Knights had both the tying and go-ahead runs on with one out. However, Dent got Jordan Moss to ground into a fielder’s choice and Ussery to ground out to short to end the game and to seal the 2-1 victory for the Raiders. 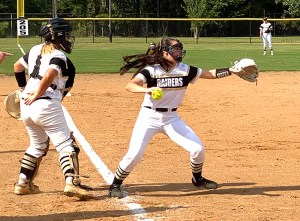 Southland Academy third baseman Morgan Weaver picks up a ground ball and tries to throw out a base runner.
Photo by Ken Gustafson

Dent pitched the entire game for the Raiders and got the win. She gave up one earned run on seven hits, walked four and struck out one WA batter. Though the Knights were able to muster seven hits and had runners in scoring position, they were unable to capitalize. Eboni Medina led WA offensively by going 3 for 4 at the plate, including a triple to lead off the game. 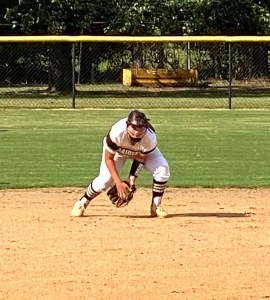 Southland Academy shortstop Holly McCain fields a ground ball. McCain went 1 for 1 at the plate with a single and a run scored.
Photo by Ken Gustafson

Sierra Ussery pitched the entire game for the Knights and took the loss. She gave up two earned runs on four hits, walked two and struck out five SA batters.

Up next for the Raiders is a trip down to Camilla on Thursday, August 20, to take on the Wildcats of Westwood. First pitch is scheduled for 4 p.m.

As postponements and cancellations of fall sports continue around Georgia, could Sumter and Schley County be next?

AMERICUS – As of this moment, the Georgia High School Association (GHSA) plans to begin high school football on... read more