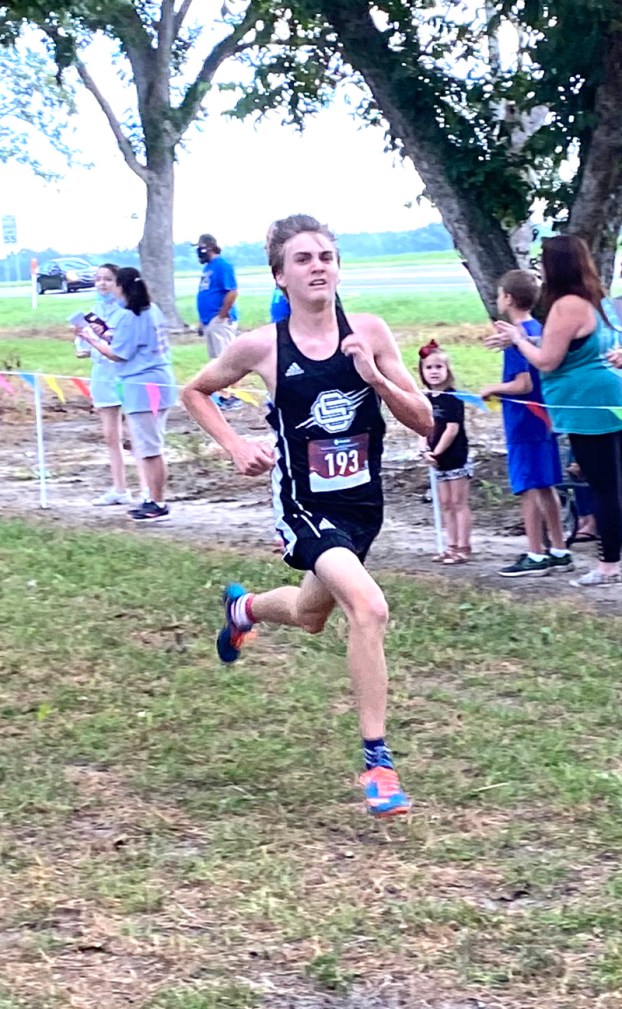 Schley County senior David Williams turned in the best individual finish for the Wildcats in the varsity boys’ race at the Patriot Pride Invitational in Rochelle, GA. Williams turned in a top 10 finish by finishing in ninth place with a time of 18:43.00. Photo by Ken Gustafson

ROCHELLE, GA – With all of the upheaval that the Coronavirus pandemic has caused, there was concern as to whether or not high school fall sports in Georgia, including cross country, would be able to take place. However, the Georgia High School Association (GHSA) deemed that it was ok for high school cross country teams, including Schley County (SCHS), to compete in the fall of 2020. The Wildcats and Lady Wildcats did just that by competing in the Patriot Pride Invitational to open their seasons on Saturday morning, August 22, at Wilcox County High School in Rochelle, GA.

Even though the COVID-19 pandemic caused training regiments to be unusual during the summer months, SCHS Head Coach Gabe Theiss was pleased overall with the performances of both the boys and girls’ squads in this opening meet.

“I thought they ran really well. We’ve got a long way to go, but that’s true at the beginning of every season,” said Theiss. “I did think they ran really well. We set a couple of PRs (personal best times) today.” Those PRs were set by seniors Jayson Lin (25:19.00) and Caleb Smith (25:31.62) in the varsity boys’ race. According to Theiss, both Lin and Smith improved their times by about 10 minutes. 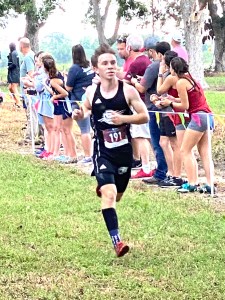 Schley County senior Aaron Pinckard was the second Wildcat to cross the finish line at the Patriot Pride Invitational at Wilcox County High School. Pinckard turned in a 12th place finish in a time of 19:13.50.
Photo by Ken Gustafson

As a team, the SCHS boys’ team finished in third place overall with 109 points. In cross country the team goal is to finish with the least amount of points as possible. The Wildcats finished 44 points behind second place finishers Perry (65) and meet winners Lowndes High School (20).

Senior David Williams was the first Wildcat to cross the finish line in the boys’ race. Williams earned a top 10 finish by finishing in ninth place with a time of 18:43.00.

During the off-season, the COVID-19 pandemic forced Williams to adjust his training regiment. “I usually go to the track three or four times a week and then they closed down all the tracks. I had to make it up all on the road.”

For Williams, a fast start was important to set the tone of the race, but not too fast of a start. “I went out really fast,” said Williams. “I think I held first place in the first 1,000 meters so I’ve got to learn to pull back on that first mile a little bit and use that later in the second mile because that’s where I really slow down a lot and in the third mile, just kick it.” Williams was about 12 seconds behind junior Brian Rogerson of Perry High School, who ran a time of 18:31.41 to finish in eighth place.

Senior Aaron Pinckard was the next Wildcat to cross the finish line. Pinckard finished the race in 12th place in a time of 19:13.50.

“I actually had pretty good training, but about June, I caught shin splints so that stopped my training for a month or so and I’m just now getting back into shape. I wasn’t really trying to push it hard,” said Pinckard. “I felt really good. I was just kind of taking it as a tempo. I need to work on my finish though. I didn’t do too well finishing.” 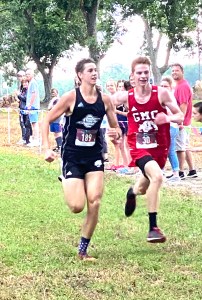 Schley County senior John Lightner battles Christian Black of Georgia Military College for 28th place in the varsity boys’ race at the Patriot Pride Invitational. Lightner was able to edge out Black for 28th place and ran a time of 20:59.94.
Photo by Ken Gustafson

Junior Dustin Howard crossed the finish line in 23rd place out of 89 competitors in a time of 20:17.15. For Howard, the off-season training went pretty much normal. “It was just like normal. I was able just to train around town. I trained pretty good at practice. It wasn’t much different,” said Howard. “My race today, it felt good. The weather was good. I’ve still got a lot of work to do.”

Howard’s teammate, senior John Lightner, finished five spots behind Howard in a time of 20:59.94. “I’m just out of shape,” said Lightner. “I was kind of disappointed with how I ran today, but it’s kind of what I expected. The course was fine and it was pretty flat.” For Lightner, not being able to train normally due to the COVID-19 was somewhat of a factor. “It effected my motivation…being stuck at home all the time,” he said. As far as what he feels he needs to work on for the next race, Lightner believes that he needs to not start out as fast as he did in this race. “I got way to excited. I haven’t raced since last year’s state,” said Lightner. “I just need to worry about pacing myself better.” 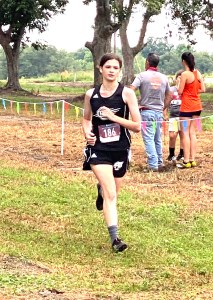 Schley County junior Holley Rogers finished the varsity girls’ race at the Patriot Pride Invitational in a time of 37:07.38.
Photo by Ken Gustafson

In the varsity girls’ race, SCHS senior Lilly Bacon was the first Lady Wildcat to cross the finish line: Bacon finished in a time of 32:18.28. After the race, Bacon told the Americus Times-Recorder that for her, there is always room for improvement and that she needs to work on her pace. Other Lady Wildcats who turned in strong finishes were junior Holley Rogers (37:07.38) and freshman Kayla Moyle (42:23.62). 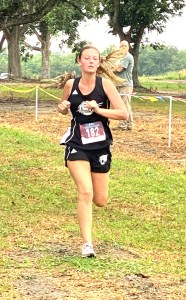 Schley County senior Lilly Bacon finished in a time of 32:18.28 at the Patriot Pride Invitational to open the season for the Lady Wildcats.
Photo by Ken Gustafson

Both the Wildcats and Lady Wildcats will compete in next week’s Furlow Fast Feet Invitational, which is hosted by Furlow Charter. The meet will be on Saturday, August 29, at 8 a.m. at the Sumter County Parks and Recreation Department (SCPRD) park located on US Highway 19 South. In addition to Furlow Charter and Schley County, the Americus-Sumter and Southland Academy varsity boys and girls’ teams will be competing and there will be a boys and girls’ middle school race in which the Southland Academy, Sumter County, Furlow Charter and Schley County Middle School teams will compete.

A fun event with a Hurricane twist