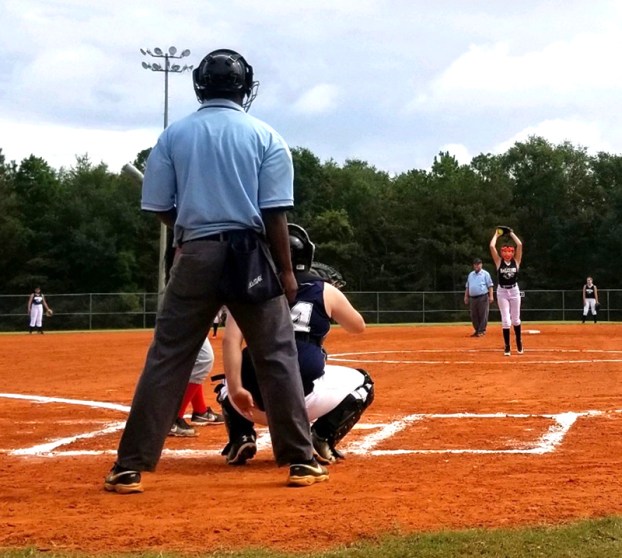 FCMS pitcher Abigail Flakes is seen here about to throw a pitch in the Falcons’ game against Mitchell County. Flakes pitched a no hitter to help lead the Falcons to a 16-0 victory. Submitted Photo

Flakes struck out nine MC batters out of the 12 that she faced in three innings of work to keep the Eagles hitless and scoreless. Flakes also led the Falcons’ offense by going 2 for 2 at the plate with two singles, two runs scored and two RBIs.

In addition to Flakes, other Falcons contributed at the plate to help earn the win for FCMS. Shortstop Anahi Gonzalez went 1 for 1 with a single, a run scored and an RBI, while Makayla Ruckman drove in five runs, with four of them coming on a grand slam inside-the-park home run. 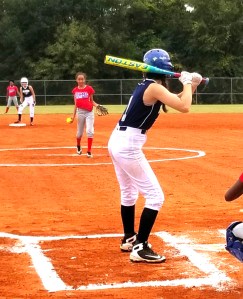 FCMS pitcher Abigail Flakes is at the plate against Mitchell County. Flakes went 2 for 2 at the plate with two singles, two runs scored and two RBIs.
Submitted Photo

The Falcons quickly took a strangle hold on the game by scoring 11 runs in the first inning and added five more runs in the second.

“I am proud of the Lady Falcons and excited to have a great start to our season. We want to thank all the parents and fans that came out today. We also want to thank Mitchell County Middle School for traveling to Americus and wish them luck for their season,” FCMS Head Coach Brandon Mitchell said. “Mitchell County Middle School has a young team, but their coaches were constantly teaching and coaching their girls up. Our eighth graders are our leaders and stepped up big time today. Most importantly, we all encouraged each other and grew together as a team. Abigail pitched an unbelievable game and Makayla did excellent at catcher, preserving the shutout.”

Mitchell also praised the defensive work of FCMS first baseman Taylor Sheppard, who made some crucial plays at first base.

Up next for the Falcons is a home game against Southwest Georgia STEM Charter School on Wednesday, August 26. First pitch is scheduled for 5 p.m.

ROCHELLE, GA – With all of the upheaval that the Coronavirus pandemic has caused, there was concern as to whether... read more