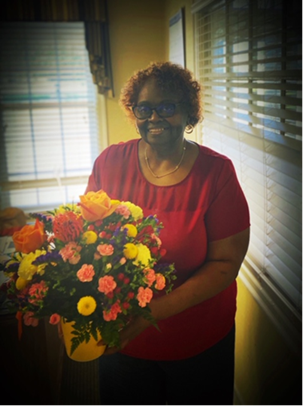 Jackie Ross has many fond memories of her 48 years working for the City of Americus. She recently retired as the customer service administrator. “I felt like it was time,” said Ross when she was asked to elaborate on why she chose to retire now. “I actually considered retiring about five or six  years ago, but I was asked to stay on another year or so to assist a new executive the city had recently hired. Some kind of way that one year turned into five,” Ross said with a smile. Ross and that particular executive became good friends and she only has good things to say about her. “She does a great job for the city and I think Americus is lucky to have her.”

Ross still recalls the day she way hired. “It was May 15th, 1972. Yes I still remember that date,” Ross smiles. “The city clerk at that time, Pat Hines, interviewed me that morning and offered me the job as data entry clerk later that day.” Ross was the first African-American to have an office position with the City of Americus and she credits much of that to the efforts of the local NAACP (National Association for the Advancement of Colored People). “The local NAACP had been urging city leaders to hire African-Americans in administrative positions and I guess the pressure finally paid off.” She was kind of apprehensive prior to her first day on the job about being the first Black in the office, but she said her co-workers and superiors treated her no differently than anybody else. “My bosses just asked me to perform my duties to the highest standards and I did that so everything was good.” She was responsible for entering meter readings into the key punch machine, and J. Frank Myers was the mayor at the time. Initially Ross considered applying for a job at the Manhattan Shirt Company when she first graduated from Staley High School in 1969. “At that time I just wanted a full-time job and have my own money.” She quickly changed her mind about blue-collar work after taking an extended tour of the factory during the interview process. “I realized then that working at a factory just wasn’t meant for me. Manual work is good, honest work but it just was something I wanted to do long term. I knew then I needed to further my education.” She then completed the clerical accounting program at South Georgia Technical and Vocational School, and after graduation applied for a clerical position with the FBI. She was hired and was about to stationed in Washington, DC, but then she was interviewed and hired by the City of Americus and her plans changed. “I’m sure working for the FBI and living in DC would’ve been a great experience, but my heart wasn’t really in it moving so far away from home and my family.” She had a couple of small siblings at the time and she was almost like a second mother to them. “All my brothers and sisters were happy when I got hired at the City, particularly the youngest ones, Fran and Sandy, because I bought them anything they wanted from shoes to clothes to toys. I really spoiled them.”

Over her 48 years at the City of Americus Ross progressed from data entry clerk to customer service rep. to the business licenses and taxes department and finally to customer service administrator, a position she held for 20 years. It was challenging trying to keep each and every customer happy but she also found it fulfilling. “There was nothing more rewarding than finding a resolution for a dissatisfied customer. I always tried to treat the customer the way I wanted to be treated.” But she said the vast majority of the customers over the years was polite and friendly and many of them became lifelong friends.

The City of Americus sent Ross out with a bang her last week at work by having a theme week focused on her retirement, a proclamation from the mayor, and a small parade in front of her house, among other events. Her retirement plans are to spend time with her sisters, nieces and nephews, garden, shop online and maybe travel a little.

Mamie Campbell: A story to tell

Mrs. Mamie Campbell had 96 years’ worth of stories to tell when she passed this June. With Rev. J.R. Campbell... read more