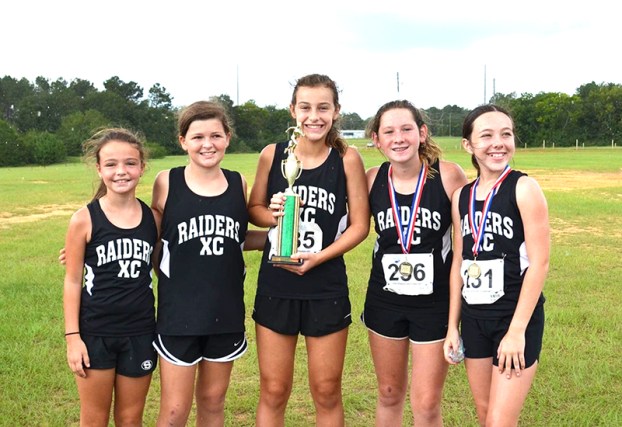 AMERICUS – It was a day of strong performances by the local middle school and high school cross country teams. Both the Southland Academy (SA) middle school girls and boys teams turned in a second-place finish and Furlow Charter (FC) senior Maya Wynn finished in third place in the varsity girls’ race at the fifth annual Furlow Fast Feet Invitational on Saturday, August 29, at the Sumter County Parks and Recreation Department (SCPRD) youth sports complex. The event was hosted by the Furlow Charter School.

As a team, the SA middle school girls finished in second place with 41 points, 10 points behind meet champions Lee County Middle School, who finished with 31 points. In the sport of cross country, the object of each team is to finish with the lowest points possible.

Brianna Brown was the top individual finisher for the Lady Raiders. Brown finished in second place in a time of 18:17.31, about 17 seconds behind individual race champion Olivia Vanderwalt of Lee County (18:00.23).

Brown’s teammate, Alyssa Godwin, finished in fifth place with a time of 19:31.64 and was barely edged out for fourth place by Lee County’s Harley Oosterveen (19:31.13). 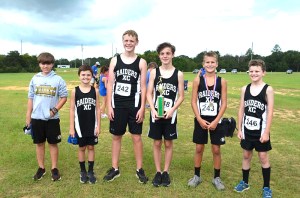 The Southland Academy middle school boys’ team also finished as meet runner-ups. The Raiders finished in second place with a total of 74 points, 25 points behind meet champions Lee County (49).Peyton Gilbert was the first Raider to cross the finish line. Gilbert turned in an eighth-place finish with a time of 17:37.31. Zack Adams of Calvary Christian School won the boys’ race in a time of 15:06.75. 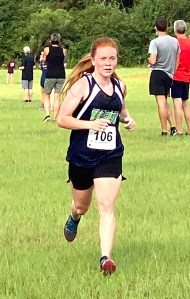 Schley County Middle School’s (SCM) first runner to cross the finish line was Sterling Blanchard. Blanchard finished 25th out of 73 competitors in a time of 19:42.70. Not far from Blanchard was Furlow Charter’s first finisher, Aiden Powe. Powe finished in 29th place in a time of 20:08.26. 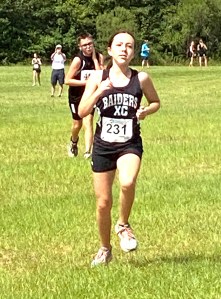 The first SA Lady Raider to cross the finish line was junior Jadie Burrell. Burrell finished in 24th place out of 80 competitors in a time of 27:14.21. “It wasn’t my best, but we’re just now getting back into it so I’m pretty proud of how I pushed through to the end,” said Burrell.

The next FC Lady Falcon to cross the finish line was freshman Maria Kilheffer. Kilheffer finished the race in a time of 28:17.76.

Freshman Julia Clare Hubbard of SA turned in a strong finish with a time of 30:06.44. Not far behind Hubbard was the first Schley County High School (SCHS) runner to cross the line, senior Lilly Bacon. Bacon finished the race in a time of 31:08.49.

The first Americus-Sumter High School (ASHS) competitor to cross the finish line was senior Teigan Pepito. Pepito finished the meet in a time of 31:22.01. 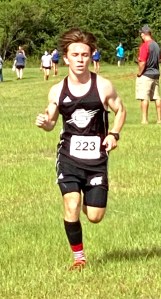 The next two local runners to cross the line were junior Jasmine Kilheffer (FC) and sophomore Ella Arnold (SA). Kilheffer finished in a time of 32:12.74 and Arnold finished roughly 21 seconds behind Kilheffer in a time of 32:33.02. For Arnold, the hilly part of the course proved to be a difficult challenge. “The race itself was kind of hard, I think,” said Arnold. “The hills over there really got me. My strategy was to start strong and try to keep the same pace and then speed up at the end.”

The next two ASHS Lady Panthers to cross the line finished one behind the other. 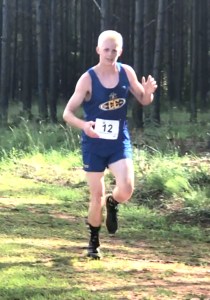 Americus-Sumter (ASHS) senior Griffin Toms finished the Furlow Fast Feet Invitational in 19th place out of 103 competitors in a time of 20:45.24.
Photo by Shanika Woodman

The FC Lady Falcons had the best team finish of the local schools, as they finished in sixth place with 160 points. The ASHS Lady Panthers finished the meet in eighth place with 207 points, while the Lady Trojans of Lee County won the meet with just 56 points, three points less than second-place finishers Vidalia (59).

In the high school boys’ race, Schley County had the best team finish of the local schools, as the Wildcats finished in sixth place with 163 points. The FC Falcons were the only other local team in the top 10, as they finished in ninth place with 210 points. Lee County ended up sweeping both the girls’ and boys’ team championships. The Trojans finished in first place with just 32 points.

In high school cross country, the object for each team is to accumulate the lowest amount of points possible. 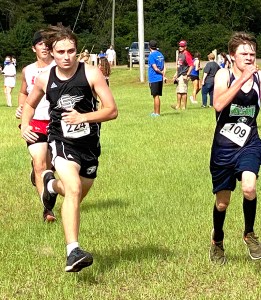 Schley County senior Caleb Smith (left) and Furlow Charter senior Ashton Crowe (right) battle it out to the finish line: Crowe finished slightly ahead of Smith with a time of 26:19.53, while Smith finished with a time of 26:20.23.
Photo by Ken Gustafson

SCHS senior Aaron Pinckard was the first local runner to cross the finish line. Pinckard finished in fifth place with a time of 19:09.09 and was roughly eight seconds behind fourth-place finisher Edward Ostrander of Lee County. Pinckard told the Americus Times-Recorder that he finished four seconds better than he did in the Patriot Pride Invitational at Wilcox County the week before. “I think I ran good. I started off slow and just started slowly picking off people and finished in fifth place,” said Pinckard. “I still need to improve on my finish. I need to work on my speed at the end, but that’s it. I think raced good other than that.”

The Wildcats’ No. 1 runner, David Williams, did not compete in the meet due to the fact that he was attending a funeral.

The next local runner to cross the line was FC sophomore Edwin Gonzalez. Gonzalez finished in 15th place out of 101 competitors in a time of 20:03.12. Four spots behind Gonzalez was ASHS junior Griffin Toms, who finished 19th overall in a time of 20:45.24.

The first SA Raider to cross the finish line was freshman Noah Sheff, who finished 23rd overall in a time of 21:06.47. SCHS junior Dustin Howard finished roughly 17 seconds behind Sheff in a time of 21:23.68. 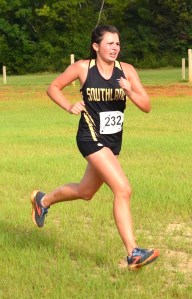 SCHS sophomore Eli Bacon crossed the line in a time of 24:29.77. For Bacon, keeping a constant pace was the goal in turning in a good time, but the heat made things more difficult for him than at Wilcox County the week before. Bacon went on to say that he believes that he can improve a lot better. 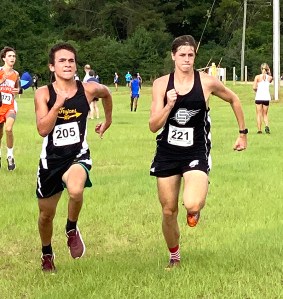 The next FC Falcon to cross the line was sophomore Apollo Huss. Huss finished the race in a time of 25:33.17. SA freshman Lee Graft finished not too far behind Huss in a time of 25:48.07. Right behind Graft was FC senior David Lane, who finished the race in a time of 25:53.92. For Lane, one of the goals coming into this race was to finish below 26 minutes, which he was able to do. “My strategy was just to start off at a slow pace and to evenly pick up my pace throughout the other two miles,” said Lane. “I feel all right about the race. I wanted to come in below a 26 and I got a 25 and some change.” Lane added that his PR (personal best time) is around 23 minutes. 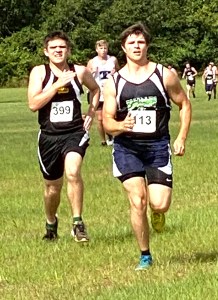 Five spots behind Lane was his FC teammate, senior Ashton Crowe. Crowe finished the race in a time of 26:19.53. SCHS senior Caleb Smith finished right behind Crowe in a time of 26:20.23. “I’ve improved a lot since last year. This is probably my best time on this course,” said Smith. “But compared to what I should be able to run, it’s not that good.” Smith added that he believes that he can improve his time by getting more acclimated to the heat.

According to SCHS head coach Gabe Theiss, the heat, along with a more difficult course, were factors that made it more difficult for his athletes to turn in better times. In spite of that, Theiss was still pleased with the effort put forth by his squads. “A lot of times, the time is determined by those things, but I felt like we did a good job and I’m looking forward to seeing them progress cause they are getting better and they’re working hard at practice so I know we’re going to end up getting there,” said Theiss. 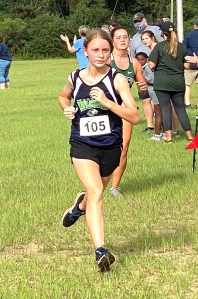 Overall, FC Head Coach Beth Kinney was pleased with the effort of her athletes as well. “They did well. They did a good job. I’m proud of them.” said Kinney.

For ASHS head coach Shanika Woodman, it was pleasing to her that her athletes were able to make the commitment to practice during the COVID-19 pandemic and it showed in their performance.

“I feel really good about their performance, being that this is their season opener,” said Woodman. “I appreciate the kids that were able to practice in pre-season workouts despite the COVID-19 putting a hamper in some sports plans. We have a lot of work to do and we have enough time to compete before regions and state. We lost many seniors last year, but we have some returners and new faces this season that I know will get us to where we need to be by the end of the season.” 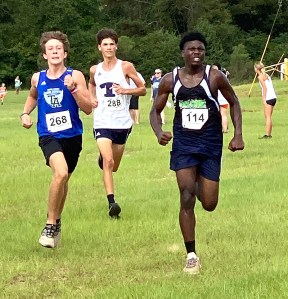 Southland head coach Buck Kinney was extremely pleased with how the SA middle school and high school teams competed in this meet. “Our team is extremely young this year, but they ran really well,” said Kinney. “Their effort was absolutely amazing and all ran very competitively within their grade and classification. Both of our middle school teams competed extremely well and were able to place second overall against a very deep and competitive field. It was a great start to the season and the team is eager to get back to work and get ready for our next meet.” 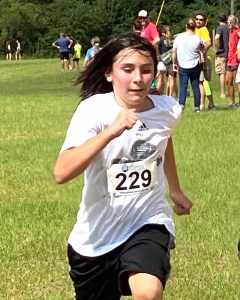 Judging by how the local middle school and high school athletes performed this past Saturday, one should believe that these Sumter County and Schley County athletes will excel even more as the season goes on. 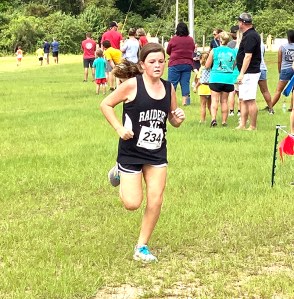 Schley County’s Wildcats and Lady Wildcats will head up to Warner Robins, GA for a meet at Warner Robins High School on Wednesday, September 9. The Americus-Sumter Panthers and Lady Panthers are scheduled to compete in the Southland Academy Invitational Meet at the end of the month.